MEMM Day 07 - Lines you quote most often in real life

I'm having a slightly hard time not including quotes from the books because they keep popping into my head, and then as I write them down, I'll be like, "Wait!  I don't think that's in the movies!  Oops."  But here are a bunch of lines I say with great regularity:

"What's taters, Precious?"  (I happen to hate potatoes, so I says this with appropriate scorn.)

"Go not to the elves for counsel, for they will tell you both 'no' and 'yes'."  (I use this to tell Cowboy he's been less than helpful when I've asked him a question, such as, "Should I go see TBOTFA again?")

"I'm going on an adventure!!!!"  (Excellent even for small adventures like getting the mail.)

"Fat hobbit is always so polite."  (Only said when someone is being terribly impolite, of course.  But usually I don't say "fat hobbit," I say, "little mouse" because we call our kids mice.)

"A day may come when (insert something that might happen, such as, "Mommy runs out of coffee"), but it is not this day!"  (Endlessly useful.)

"We've had one, yes.  But what about second breakfast?"  (This has to be said with Pip's accent and the appropriate drawing-out of the word "second" so it sounds like "sayyyycond.")

"Tomatoes, sausages, nice crispy bacon."  (Pretty much I say this whenever we have bacon.  Which is often, but not often enough.)

"It comes in pints?  I'm getting one!"  "But you've had a whole half already!"  (Generally useful any time I discover there are larger sizes of something I like.  Even shampoo -- doesn't have to be an edible thing.)

"Look's like meat's back on the menu, boys!"  (Almost always used in inappropriate circumstances, like when we see some roadkill, or Cowboy kills a particularly large spider.)

"I'm looking for someone to share an adventure."  (This is great for springing an unexpected journey on my kids, like a trip to the grocery store because I just discovered we're out of milk.)

"That road there... where does that lead?"  (Makes jaunting off into new places seem more exciting and mysterious.  Even when it's just a road that we haven't driven on before, but we know right where it goes.)

"Now here is a thing unheard of!"  (Mostly directed at my kids when one of them suddenly announces they hate doing something they formerly loved.  Or vice-versa.)

"Keep it secret!  Keep it safe!"  (Particularly if it's chocolate.)

"Will you have peace, or war?"  (Generally I'm offering a choice between less momentous things, like do you want Cheetos or ice cream for your dessert, but this sounds much cooler.)

And Cowboy and I used to quote the last bubble of this a lot, back when FOTR first came out, so I thought I'd include it just because it amuses me still: 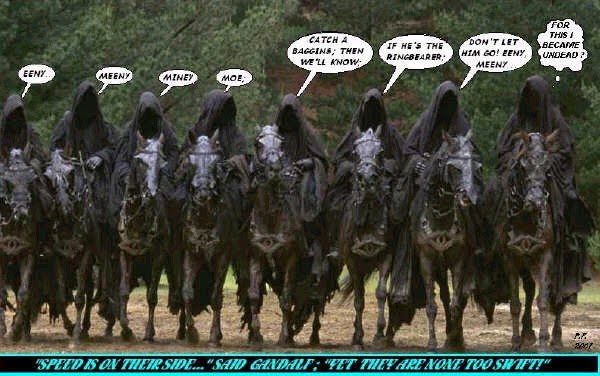