You'll notice that we very subtly put an "s" on the end of the word "character" in this prompt, which means we can talk about more than one character from each race if we want to.  And I want to.  I was going to do my own screencaps for every character, but that began to take too long (DKoren posted her answer to this one yesterday, and even though we agreed we weren't keeping to a schedule, now I feel very behind, hee).  Also, for some characters I really wanted to use pics from TBOTFA, which obviously I can't screencap yet.

Starting with the super easy one, because I only love one wizard, and he, of course, is Gandalf.  I love him Grey and White, and he is my third-favorite character in LOTR and second-favorite in The Hobbit trilogy (which I'm going to abbreviate as TH until further notice).  Why do I love Gandalf?  Because he's wise and witty and sarcastic and caring.  He devotes his entire being to caring for Middle Earth, and I love that.

Another quick one, because there's only one Orc that I actually have a sort of fondness for, and that is Azog.  Holy cow, is he an amazing antagonist or what?  He brings a much-needed central conflict to TH, and he's kind of fascinating in his relentlessness.  Of course I don't actually "love" him, but I do think he's very awesome, so he fits the bill for "favorite."

Now we come to the more lengthy answers.  My favorite dwarf is Balin.  Balin is endlessly kind to Bilbo, comforting him, explaining things to him, and obviously rooting for him through their various adventures.  Also, Balin is old and wise, and knows how to talk people into things.  I want to hang out with him and hear all his stories about his long life.

Then next I like Bofur.  He's almost always smiling!  His cheerfulness is almost unquenchable, and he's also one who takes Bilbo under his wing, in a way, even providing him with a make-shift handkerchief :-)  And he puts a happy spin on the most miserable of subjects, which always cracks me up.  Also, he kind of looks like George Harrison, my favorite Beatle.


And yes, then Thorin.  Which I would not have said, prior to The Hobbit:  The Battle of the Five Armies.  Up until it, I thought he was, well, gittish.  Proud and stubborn and kind of mean.  But the third movie changed all that, and now watching him in the first two movies, I can see his whole character arc, how he starts to grow and change as Bilbo defies his expectations again and again.  While I don't love love love him, I do like him a lot now, and may eventually love him, who knows.  That movie was a game-changer in so many ways.


I was only going to do top three for each race, but I can't leave out Kili and Gimli, so they get to tie for fourth.  Kili because he's sweet and charming, and Gimli because he's grumpy and lovable. 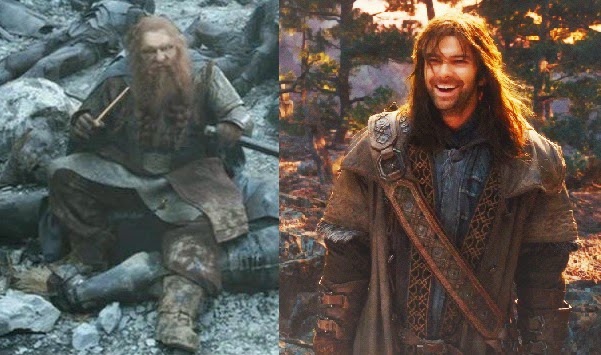 This is an easy one.  I absolutely love Lord Elrond.  I always have, ever since I first visited Rivendell lo these 13 years ago.  He's wise, he's stalwart, he's kind, he's helpful.  And, as the flashbacks in LOTR and the magnificent fight scene from TBOTFA showed, he's a crazy awesome warrior.  More on that in a later post, I promise!


And who next but Legolas?  Honestly, until I saw TH, I only liked Legolas okay, but he got so much awesome character exploration in TH that I started to really dig him.  Now I'm excited to rewatch LOTR with his past in mind, and see how it informs his actions toward dwarves, especially at the Council of Elrond, where I recall him being pretty bitterly anti-dwarf.  And his relationship to Aragorn, which I recall being portrayed very niftily as well, with Aragorn calming him down on a couple of occasions where you might not expect an elvish prince to be so easily shushed.

And then comes Tauriel, who I would actually like to be.  She's savvy and brave, but willing to learn new things about herself and others.  It takes a lot of guts to forsake a hard-won position in a male dominated field because you've fallen in love, and it also takes a lot of guts to admit you're in love with someone everyone you know hates.  Also, I love her hair.

Samwise Gamgee is my favorite hobbit.  In fact, he's my second-favorite LOTR character and third-favorite in all of the Middle Earth movies.  I'll be talking about him a lot more in a later post, but for now I must say that he is all things helpful and kind and loyal.  The word "true" comes to mind whenever I think of Sam.

Next comes Bilbo Baggins, and I would not have said this at all up until December.  But like I said, TBOTFA changed a lot of things, including my feelings for Bilbo.  I mean, I liked him a great deal through AUJ and DOS, but I didn't love him.  Not until the third movie.  Now, I think he's got one of the greatest character arcs I've ever seen, going from a complacent homebody to a determined ambassador for doing the right thing.

This is the real shocker.  This is something I did not ever expect to say.  Ever.  If you had said to me, a mere seven weeks ago, that I would ever list this person as my favorite Middle Earth human, I would have laughed you into submission.  But I'll say it one more time:  The Battle of the Five Armies changed so much.  And I tell you the truth -- my favorite character in all of Middle Earth is Bard the Bowman.

I was going to rhapsodize for a while on why he's my favorite, but I realized I'll also be spending a whole entire post on him later on, so for now I'll try to be brief.  I identify very strongly with Bard -- the decisions he makes, the way he interacts with people, even the words he chooses are all things I feel I would do if I were in his position.  His family is his focus; everything he does, he does to care for and protect them, and that is very much my life.


But I will never stop loving Boromir.  He is my favorite LOTR character, and is second only to Bard in the Middle Earth corner of my heart.  (And he's still my favorite book character, because Book Bard is boring, while Book Boromir is splendid.  But these posts are about the movies, not the books.)  Boromir is honorable and mighty, but too proud, and so very human.  I love his kindness to the "little ones" and the way he atones for his misdeeds without hesitation.

And my third-favorite human is Eomer.  He's kind of brash, the rough-and-ready sort, but endlessly loyal.  And I love his relationship with his sister.  He's protective of her, but he doesn't try to put her on a pedestal or imagine she can't take care of herself.