I made my first list like this back in 2013, but it is high time for an update because I have seen several Christmas movies since then that just have to be on this list, while others have dropped off.  So here we go! 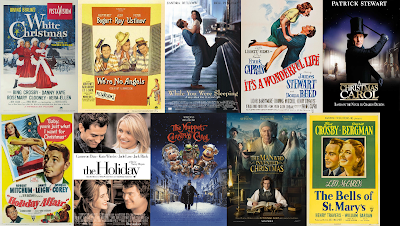 1.  White Christmas (1954)
A team of showbiz stars (Bing Crosby and Danny Kaye) try to rescue a retired general (Dean Jagger) from bankruptcy by staging a show at his ski lodge.  I've watched this almost every single Christmas season for three decades, and I never get tired of it.
2.  We're No Angels (1955)
Three escaped convicts (Humphrey Bogart, Peter Ustinov, and Aldo Ray) try to rescue a bumbling businessman (Leo G. Carroll) from his unscrupulous cousin (Basil Rathbone).  Possibly the funniest movie I have ever seen, and also one of the most heart-warming.  DO NOT get the 1989 remake by mistake.
3.  While You Were Sleeping (1995)
When a lonely train fare collector (Sandra Bullock) rescues a handsome stranger (Peter Gallagher) from being hit by a train, his family mistakes her for his fiancee.  My favorite romantic comedy, my favorite Sandra Bullock role, my favorite Bill Pullman role, and another of the funniest movies I've ever seen.
4.  It's a Wonderful Life (1946)
George Bailey (James Stewart) decides he's worth more dead than alive, and it takes an unlikely angel (Henry Travers) all of Christmas Eve to convince him otherwise.  There's a reason it's so famous -- it's really that good.
5.  A Christmas Carol (1999)
Ebenezer Scrooge (Patrick Stewart) learns not to be so stingy.  A stellar performance from Stewart elevates this above the usual made-for-TV Christmas movie.
6.  Holiday Affair (1949)
An unconventional sweetheart (Robert Mitchum) and a convention-bound widow (Janet Leigh) work very hard convincing themselves they haven't fallen in love over a toy train, a Christmas dinner, and a very loud necktie.  I love this weird little movie more every time I watch it.
7.  The Holiday (2006)
An unhappy LA woman (Cameron Diaz) trades houses with an unhappy British woman (Kate Winslet) for Christmas, and they find happiness and love in their new surroundings.  Did I mention Jude Law?  And Rufus Sewell?  But my favorite part of the whole movie is everything that involves Eli Wallach's sweet, elderly Hollywood writer.
8.  The Muppet Christmas Carol (1992)
Ebenezer Scrooge (Michael Caine) learns not to be so stingy with the help of a lot of Muppets.  My kids really love this movie too :-)
9.  The Man Who Invented Christmas (2017)
Charles Dickens (Dan Stevens) needs money.  And he needs his career to stop fizzling.  And he needs these grumpy characters in his head (especially Scrooge, played by Christopher Plummer) to cooperate.  And he needs people to stop pestering him so he can just write his next book.  I was WAY more charmed by this movie than I expected to be!
10.  The Bells of St. Mary's (1945)
Father O'Malley (Bing Crosby) is tasked with shutting down a Catholic school run by Sister Mary Benedict (Ingrid Bergman), who is determined to save it.  I like this a lot better than Going My Way (1944), Crosby's other turn as O'Malley.
Well, that's my list!  Did you notice that the posters for two of them mirror each other?  I just think that's neat.  And probably deliberate, don't you suppose?  Anyway, are any of your favorites here?  Got any suggestions for me of Christmas movies you think I might need to see?
Posted by Hamlette (Rachel) at 11:20 AM