I haven't watched a single Christmas movie yet, and a whole week of December has passed already.  Argh!  Anyway, I decided to list my favorite Christmas movies even though several of these will show up on other lists too.  I don't think of a couple of these as strictly Christmas movies, but they either occur during Christmas or involve Christmasy stuff, so in they go.

I was originally doing these lists in order of how genres are arranged on my shelves, but I'm skipping over a few sections to get to this one because it wouldn't make much sense to post these in February, hee. 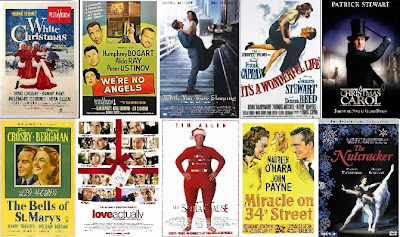 A team of showbiz stars (Bing Crosby and Danny Kaye) try to rescue a retired general (Dean Jagger) from bankruptcy by staging a show at his ski lodge.  I've watched this almost every single Christmas season for two decades, and I never get tired of it.

Three escaped convicts (Humphrey Bogart, Peter Ustinov, and Aldo Ray) try to rescue a bumbling businessman (Leo G. Carroll) from his unscrupulous cousin (Basil Rathbone).  Possibly the funniest movie I have ever seen, and also one of the most heart-warming.  DO NOT get the 1989 remake by mistake.

When a lonely train fare collector (Sandra Bullock) rescues a handsome stranger (Peter Gallagher) from being hit by a train, his family mistakes her for his fiancee.  My favorite romantic comedy, my favorite Sandra Bullock role, my favorite Bill Pullman role, and another of the funniest movies I've ever seen.

George Bailey (James Stewart) decides he's worth more dead than alive, and it takes an unlikely angel (Henry Travers) all of Christmas Eve to convince him otherwise.  There's a reason it's so famous -- it's really that good.

Ebenezer Scrooge (Patrick Stewart) learns not to be so stingy.  A stellar performance from Stewart elevates this above the usual made-for-TV Christmas movie.

Father O'Malley (Bing Crosby) is tasked with shutting down a Catholic school run by Sister Mary Benedict (Ingrid Bergman), who is determined to save it.  I like this a lot better than Going My Way (1944), Crosby's other turn as O'Malley.

Lots of Londoners (played by a star-studded cast) learn that love is actually all around us.  This is my guiltiest pleasure, as it's chock full of naughty bits.  But it's so sweet and so funny that I can't help loving it.

A beautiful version of Tchaikovsky's ballet about a little girl who dreams her toy nutcracker comes alive and takes her on an adventure.  Starring the amazing Mikhail Baryshnikov, who also choreographed it.

Do you have any favorite Christmas movies?  Got any recommendations of things I should try to find and watch?  Please share!
Posted by Hamlette (Rachel) at 4:07 PM