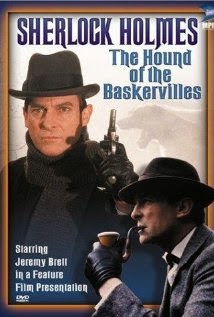 I find it fitting that my last post for 2013 involves Sherlock Holmes -- I spent a great deal of this year in his company.  After reading through all of Jane Austen's novels in 2012, I decided to read through the entire Holmes canon in 2013.  I'm forced to admit that I failed.  I still have His Last Bow and The Casebook of Sherlock Holmes to go.  But I didn't start reading the canon until March this year, so I could still manage to read the last two books in the next couple of months and have read the whole canon within one year's time, if not all in the same calendar year.  In 2013, I've also watched quite a few episodes of the Granada Television series starring Jeremy Brett, as well as the first four episodes of the BBC's Sherlock.

Anyway, The Hound of the Baskervilles is my favorite Holmes story, and I absolutely love this adaptation.  It's got everything I want:  spooky atmosphere, an exceedingly sympathetic client, an intelligent and inquisitive Watson, and a perfectly Holmes-ish Sherlock Holmes.  Not to mention a gigantic hound that gleams with a spectral fire.  An odd choice of things to watch Christmas week, but it's what my mom requested, and I don't think I've ever turned down a chance to watch it.

If you want a quick recap of the story, I provided one in my blog post about the book here.  In this post, I'm going to discuss the various performances and production elements for this particular adaptation. 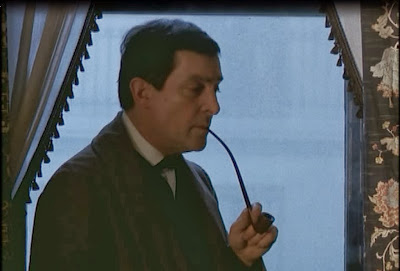 First, Jeremy Brett as Sherlock Holmes.  I discussed at length here why he is my favorite actor in the role, so right now I'll just repeat that Jeremy Brett's Holmes more closely matches the Sherlock Holmes in my imagination than any other actor I've seen in the role.  Yes, even more than Benedict Cumberbatch, though he is lots of fun too.  Physically, he's got the necessary hawk-like nose, long fingers, and is tall and spare (in later episodes he'd gained a lot of weight because of anti-depressants he was on, but here he's still, if not gaunt, at least not fleshy).  But looking like Sherlock Holmes isn't enough.  Jeremy Brett conveys all the little nuances of this character: his brusque dismissal of wrong or inferior ideas when Watson is theorizing about a walking stick, the energizing joy and thrill he feels when he's offered the case, and his genuine affection for and trust in Watson. 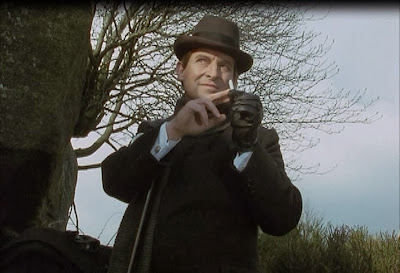 Add to that his boyish glee when he surprises Watson at one point and his rueful admission that the food he's offering Watson is "quite disgusting," and I couldn't be more pleased. Next, Edward Hardwicke as Dr. John Watson.  He's the second actor to play the role opposite Jeremy Brett -- the first was David Burke, who only did the first season of the show (called "The Adventures of Sherlock Holmes").  As nice as Burke's portrayal is, I love Hardwicke's more because he's a bit nicer, more sincere.  But not a milksop or a rug for Holmes to walk all over, don't think that.  He's very human -- for instance, when Holmes abruptly announces that he wants Watson to go to Baskerville Hall with Sir Henry, Hardwicke's Watson doesn't just look surprised or nonplussed -- he goes from surprised to not entirely happy at the prospect to resigned to accepting and trying to look at the bright side of the situation.  In about four seconds. 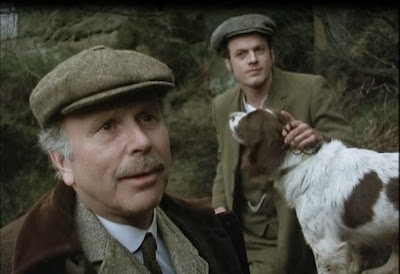 Also, he looks very cute in his little walking cap. 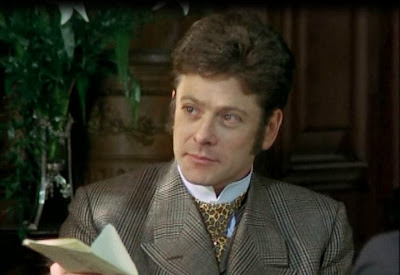 Okay, so on to Sir Henry Baskerville, played by Kristoffer Tabori.  I like him so very much.  Sir Henry has spent most of his life in America, and Doyle's American characters tend to have somewhat clunky dialog.  But Tabori does a good job making it sound realistic and charming.  Also, he has this very sincere, trustworthy face, instantly likeable.  He doesn't scare easily, this Sir Henry, and he's very game to walk into what could be terrible danger by moving to Baskerville Hall.

Dr. Mortimer (Alastair Duncan as Neil Duncan), Stapleton (James Faulkner), and Beryl Stapleton (Fiona Gillies) are all quite nice too, but not memorably wonderful. 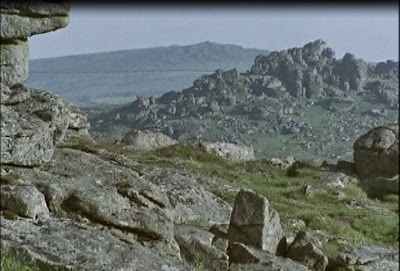 The scenery is very atmospheric, full of boulders and mist and eerily open spaces.  There are lots of great shots like this that help set the mood. 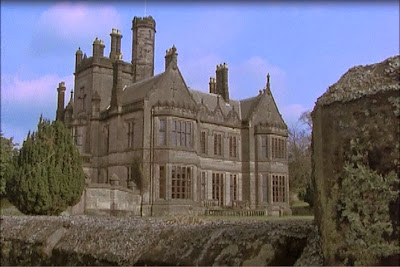 This is Baskerville Hall in the daylight. 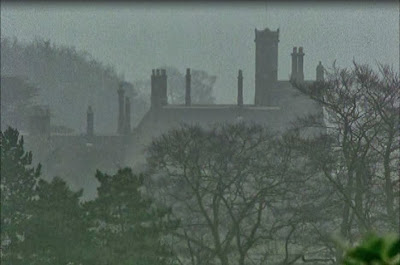 And here it is at night, all gloomy and forbidding.  This is how you usually see it. 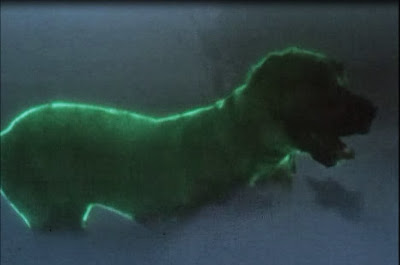 And this is what the spectral hound itself looks like.  Not the best special effects, and the one aspect of this that I wish had been done better.  On the other hand, for a mid-'80s TV show, its not horrible either.

Well, that's about all I have to say about this adaptation.  The acting and script are superb, and if you enjoy Sherlock Holmes stories or period mysteries, I encourage you to find and watch this. 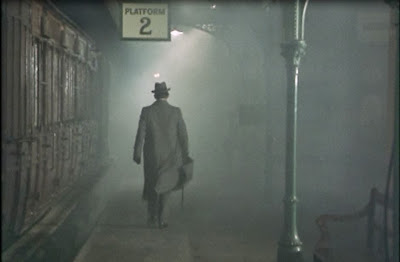