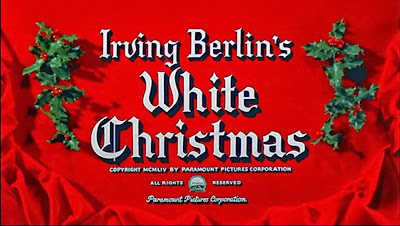 As I mentioned here, this is my absolute favorite Christmas movie.  It's also one of my favorite musicals.  I can still remember the first time I saw it -- I was probably six or seven, and I got to stay up a bit late to finish watching it when our local PBS station aired it.  I didn't see it again for a few years, until we borrowed a bunch of movies from my aunt while on summer vacation.  I bought my own copy shortly thereafter, and watching it became a Christmas tradition.  I took it to college with me, and my dear friend ED and I discovered that it would not snow on our college campus until we had watched it together.  Pattern held true all four years. 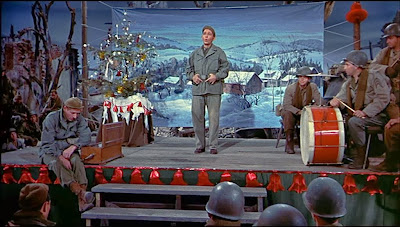 Their commander, Major General Tom Waverly (Dean Jagger) is being replaced by a younger general, and they give Waverly a musical send-off to assure him they won't forget him. 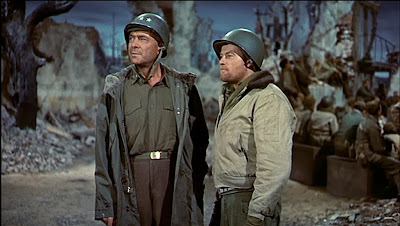 Right while they're singing, bombs begin falling all around.  Phil Davis saves Bob Wallace from a falling wall, breaking his arm in the process.  He then uses his broken arm to convince Wallace to team up with him once the war is over, and the two make it big in show business and song-and-dance men. 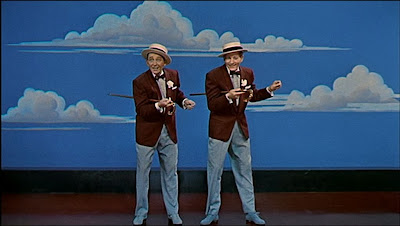 Ten years later, they're wildly famous, but both getting tired of their lonely lives schlepping from one gig to the next.  Enter Betty (Rosemary Clooney) and Judy Haynes (Vera-Ellen), sisters who do a floor show. 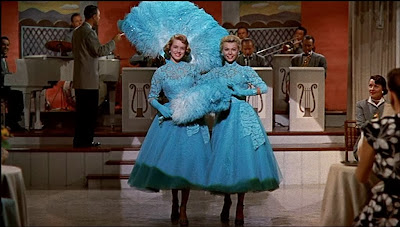 Their brother (Freckle-faced Haynes the Dog-faced Boy) was in the army with Wallace and Davis, and the girls cash in on that to get the famous producers to come see their act, maybe get a little free advice.  Instead, the boys end up getting the girls out of a jam by taking over their place in the floor show. 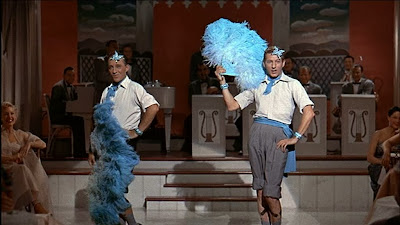 Um, yes.  And then they all wind up in Vermont, where General Waverly now owns a ski-lodge that is foundering. 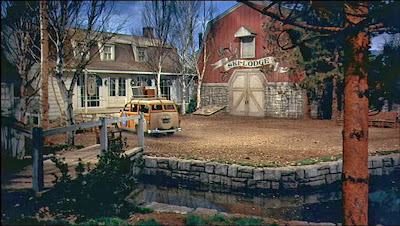 It's December, and there's no snow!  No snow means no people at the lodge means no money for General Waverly means everyone needs to somehow rescue him without him knowing they're rescuing him.  Which leads to lots of musical numbers, people falling in love, the usual. 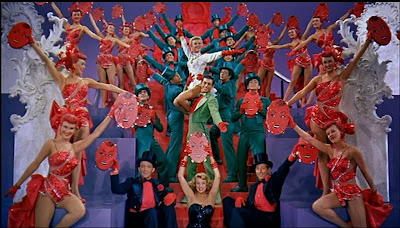 And then at the end, I cry happy tears and clap. 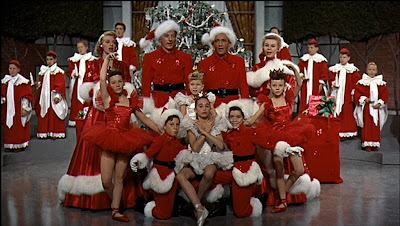 It's splendid, I tell you.

It's also the first movie ever presented in VistaVision, which is a nifty little bit of trivia.

Is this a family-friendly movie?  You bet!  No bad language, no violence (other than a few bombs falling off-camera), no innuendo.  A few costumes that look like a modest bathing suit are the closest it gets to objectionable material.

Speaking of costumes, I realized while watching this that I spent a lot of time as an adolescent dreaming of what it would be like to be a grownup and wear clothes like these.  I just grew up fifty years too late.  I know I don't talk a lot about costumes most of the time, but I want to share some of my favorites.

These are the Haynes sisters' dressing gowns.  I love them both.  I think Betty's classic red is my favorite, but the little clasp things on Judy's are really cute. 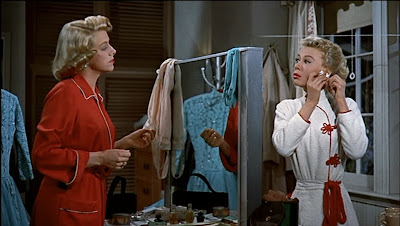 Then there's this pink dress of Judy's.  I love the way the skirt flares out!  And those sleeves! 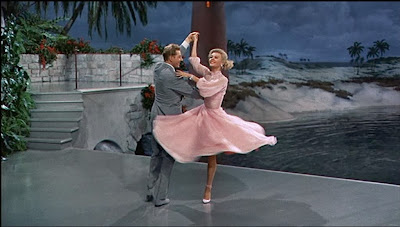 Here's another shot where you can see how sparkly it is.  I really thought when I was a kid that some day I would get a dress just like this.  Still haven't. 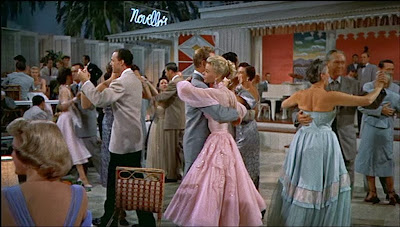 Here you can see the sleeves and bodice more. 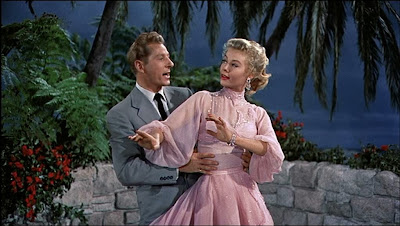 Here's an amazing, elegant dress on Betty.  Look at those unique shoulder straps! 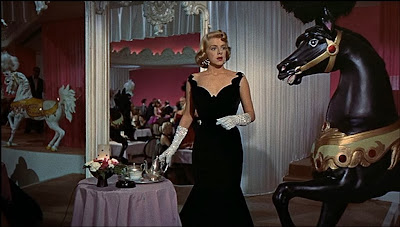 It has such a cool silhouette too.  Although I like Judy better as a character, I like Betty's dresses better.  Maybe because I'm shaped more like her. 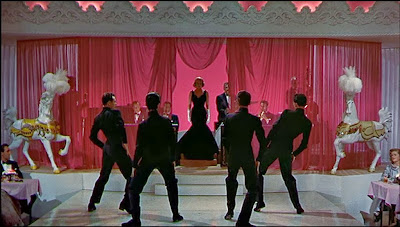 And this is my favorite dress in the whole movie.  It's a gorgeous dark green, which is hard to tell here because honestly, my DVD is not made from the clearest print and everything's a little dark. 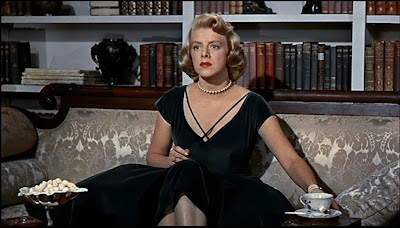 There are almost no full-length shots of this dress, alas.  But doesn't it have the most interesting neckline/bodice thing going on, with those criss-crossing straps?  They're echoed on the back.  I did actually manage to find a dress once that reminds me of this one, dark green with short sleeves and a full skirt.  Mine is ankle-length instead of just below the knee, doesn't have the nifty straps, and instead of being totally velvet like this one appears to be, mine has a velvet bodice and a shiny skirt.  But I love it anyway -- I wore it on my first real date with Cowboy. 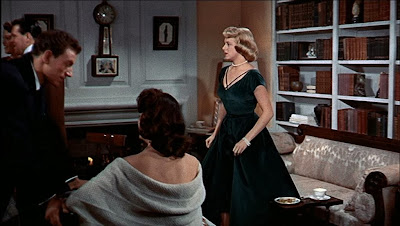 The guys get some super fun outfits too -- this one from the "Minstrel Show" number is my favorite, just because the red and black are so striking, and the red gloves are amazing.  What do you suppose Bing whispered to Danny here? 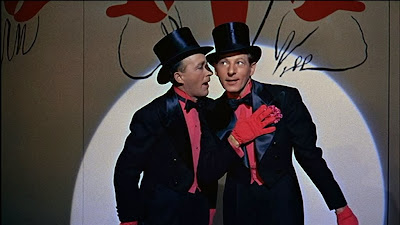 I didn't take many screencaps of the more every-day clothes, other than this one just because it's a fun shot. 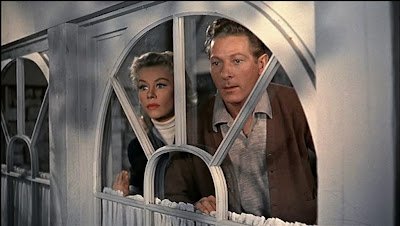 One thing I love about this movie is that some of the costumes get worn more than once -- both Judy and Betty have a couple of outfits that they wear at least twice, which is so realistic for two girls living out of suitcases!

So, anyway, there you have it, a whole lot of my thoughts on one of my favorite movies.  "May your days be merry and bright, And may all your Christmases be white!"
Posted by Hamlette (Rachel) at 7:12 PM