Today is Pearl Harbor Day, in case you forgot.  Today, December 7, 1941, is the day that the Imperial Japanese Navy "suddenly and deliberately attacked" the American Navy at Pearl Harbor, Hawaii.  Our shocked and saddened nation entered WWII as a result.  President Roosevelt called it the "date which will live in infamy."

You may or may not know that I am fascinated by WWII.  The courage, the sacrifices, the heroism of ordinary people on all sides -- I find it all so compelling.  My favorite TV show, Combat!, takes place during WWII, and so do a lot of my favorite books and movies.

And beginning today, in honor of the people who died during the Pearl Harbor attack and all the brave people who got swept up into the war, I am giving away a copy of one of the finest movies to deal with the aftermath of WWII.  It's not a war movie, with battles and blazing guns and splashy heroics.  It's a drama, winner of 7 Oscars, including Best Picture:  The Best Years of Our Lives (1946).

This giveaway is open until 12:00am on Friday, December 13, 2013.  I will draw the winner that day and post their name here on my blog, and also contact them via the email address provided to the widget.  The winner will have until Friday, December 20, 2013, to reply.  If they haven't responded to my email by then, I'll choose another winner. 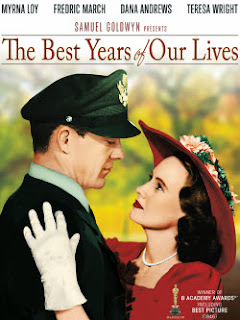 I wrote a little about this movie years ago, the first time I saw it.  I've seen it probably four times since then, and it never fails to amaze and delight me.  It follows three American servicemen, Fred (Dana Andrews), Al (Frederic March), and Homer (Harold Russell), as they try to reenter their civilian lives after the war.  There are a lot of movies that deal with how ordinary people become heroes.  There are very few like this one, which deals with how heroes try to become ordinary people again.  This is not a funny or exciting movie.  It's not depressing either, but it is serious and heartfelt and, yes, dramatic.

Fred, Al, and Homer meet up when they all catch a ride on the same plane to get back to their hometown.  Al returns to the arms of his loving wife (Myrna Loy) and children (Teresa Wright and Michael Hall), and to his old job as a bank something-or-other.  Fred returns to the woman he married (Virginia Mayo) after a quick wartime romance, but his old job at the department store now belongs to his former rival, and he winds up as a lowly soda jerk.  And Homer returns to his parents and the girl next door (Cathy O'Donnell), whom he had planned to marry, though now he thinks she should leave him.  Why?  Because he lost both hands during the war.  Harold Russell actually lost both his hands in the line of duty, and he won a special Oscar for his performance here, for "bringing hope and courage to his fellow veterans."  His is the most affecting story, as he battles his own feelings of inadequacy as well as the stares and whispers of strangers.

Today, I'm giving away a brand-new copy of The Best Years of Our Lives on DVD.  All you have to do to enter is fill out the widget below.  I hereby vow not to use your info in any way other than to contact the winner to tell them the good news and ask them for their mailing address so I can send them the DVD.

You might be wondering if this is a family-friendly movie.  Yes.  Absolutely.  I will mention that there's some cigarette smoking and alcohol consumption, and at least one scene where a character has clearly had too much to drink.  Fred has PTSD, with nightmares and moments where he's emotionally upset by his memories, though his wartime experiences are not shown.  As mentioned before, Homer has no hands.  He has hooks instead, and little kids might be freaked out by that.  And there is a subplot involving a married man falling in love with another woman, and at one point that woman tells her parents she wants to bust up his marriage so she can have him herself.  This is treated very seriously, and I promise you that if you stick with the movie, you will like how that subplot is resolved.  I watched this with my mother-in-law years ago, and she raised her eyebrows and made some comments along the lines of "Oh dear" and "My, my" when we got to that part of the movie.  But she stuck with it, and approved of the way things turned out.  There is no bad language, no major violence (there's one fist fight), no nudity or sex.


So go ahead and enter, and then leave me a comment telling me why you'd like to own this movie.  Have you seen it before and would love your own copy?  Have you never seen it, but always wanted to?  Have you never even heard of it, but think it sounds great?  Whatever the case, good luck!  And remember Pearl Harbor!

(This giveaway has ended.)
Posted by Hamlette (Rachel) at 9:23 AM