After mulling over this episode for a few days, I've come to realize that it's never going to be a favorite.  Which both saddens and surprises me, since, as I mentioned in my previous post, The Hound of the Baskervilles is my favorite Sherlock Holmes story.  But maybe that's precisely why I didn't love this episode?  Did it tinker too much with a beloved story?  I don't think so.  I'm not by any means a purist when it comes to books and movies -- as long as it works for the story you are telling, you can make any number of changes and I'm generally okay with that.  And the story here works just fine.

No, what I disliked is how horror-ific it got.  And this is a purely personal thing:  I don't deal well with horror.  I am terrified by horror movies and horror stories (unless they involve vampires).  I have a strong imagination that, for some reason, latches onto horror things and works itself into a frenzy over them (unless they involve vampires).  I have watched maybe five or six actual horror movies (not counting vampire movies), all of them ten years or more ago, and there are still images and scenes from them that freak me out.  That will convince me my house is coming alive to attack me, whatever.

I'm also afraid of the dark.

Specifically, I'm afraid of what lurks behind me in the darkness.  I don't know what it is -- call it a nameless terror -- but I cannot reason my way out of it.  Some of the most fervent prayers I have ever prayed have been along the lines of, "Lord, please keep me safe from whatever is behind me."

And this episode of Sherlock has stuff in it that preys pretty directly on my fear of nameless terrors in the darkness.  I'm not saying I'm going to have nightmares because of it.  But this is not an episode I'll watch again and again.

Which is sad, because it's a very strong episode.  The fact that I'm having such strong feelings about it points to its power, don't you think?  And I did love some things about it.  The Grimpen Minefield?  Genius!  Dr. Mortimer is now Henry's psychiatrist?  Love it!  And Lestrade showed up -- made me so happy.

I also really liked Henry Knight (Russell Tovey).  Very sweet, sympathetic character.  Though I kept yelling at him to just call Sherlock or John already during a bunch of scenes.  But still, great character. 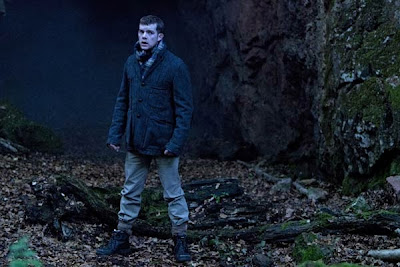 And there was this moment: 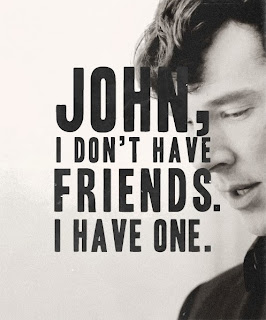 That was probably my favorite moment.  Can never tell if this Sherlock is being sincere or playing you, but I think he was being sincere there.  Actually, that's the other reason I didn't like this ep as well as I'd hoped:  Sherlock was too mean!  The trick he pulled on John (trying to avoid spoilage for some reason) made me really mad at him.  Grr.

So.  All in all, a great ep, but one I didn't love for extremely personal reasons.  Oh well.

Hey, look!  Two back-to-back blog posts about two different screen adaptations of the same story!  I'm not sure I've ever had that happen before.  Nifty.
Posted by Hamlette (Rachel) at 10:59 AM