Probably not a lot of surprises on this list, other than possibly what order I put them in.  And yes, there are really just three sets of superheroes here, I know.  I love the X-Men, I love the Avengers, and I love Robin -- what can I say?

I waited until now to post this because I wanted to see The Wolverine a second time once it came to DVD, to decide whether or not I would include it here.  And I decided that although I have issues with the final act... it's Wolverine.  I love him too much to leave it off.

And before I get lots of outraged comments about the fact that the Dark Knight trilogy does not appear here, let me be clear:  I love Robin.  I merely like Batman.  Also, Christian Bale ain't no Val Kilmer.  Also, playing the Joker basically killed Heath Ledger.  So while I do own Batman Begins, I don't love it.  Remember, this is my favorites, not what I think the best movies are. 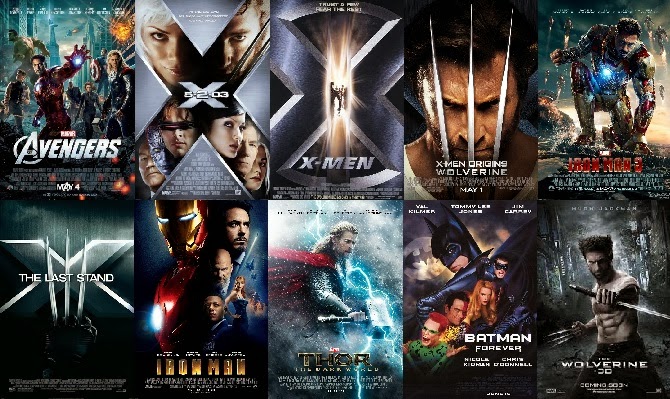 Six talented people assemble to save the world from Loki's (Tom Hiddleston) desire to show Thor (Chris Hemsworth) he can be cool too.  And no one writes about groups of lost creatures like Joss Whedon -- this is what a superhero movie should be.

Professor X (Patrick Stewart), Magneto (Ian McKellen), and their followers join forces to keep William Stryker (Brian Cox) from destroying all mutants.  Until I saw The Avengers, I thought this was what a perfect superhero movie looked like.  It's still magnificent.

The X-men help wandering mutant Wolverine (Hugh Jackman) rescue Rogue (Anna Paquin) from Impending Doom.  And to think that I refused to see this at first because I thought Hugh Jackman was all wrong for Wolverine!  What kind of fool am I?

Wolverine squares off against his half-brother Sabretooth (Liev Schreiber) and a younger Stryker (Danny Huston this time), and gains his adamantium skeleton in the process.  This is the origin story I've always wanted.

It's the X-Men versus Magneto's bunch again, with a back-from-the-dead friend turned into a foe.  Actually a better movie than X-Men, but I don't love it as much.

Genius billionaire playboy philanthropist Tony Stark (Robert Downey, Jr.) escapes from captivity and hunts down the people who kidnapped him.  And builds a really cool flying suit that shoots stuff.

Thor (Chris Hemsworth) and Loki (Tom Hiddleston) team up to save the Nine Realms from angry elves.  Not as twee as that sounds.

Batman (Val Kilmer) acquires a girlfriend (Nicole Kidman), a protege (Chris O'Donnell), and two enemies (Tommy Lee Jones and Jim Carrey).  The first superhero movie I ever truly loved.  It looks dated and wacky now, but it was extremely cool when I was an extremely uncool fifteen-year-old.

A mourning, angry, lonely Wolverine (Hugh Jackman) goes to Japan.  I didn't mind the final act nearly as much the second time around, though why on earth he doesn't just slice up those arrows-on-ropes and get the heck outta Dodge still stymies me.  Oh well.

What do we learn here?  That the year 2000 ushered in the Golden Age of Superhero Movies!  Only one movie on this list was made before then.  Wow!

Interestingly, I love 5 of these movies mostly because of one character:  Wolverine.  Yeah.  He's that important to me.  And unlike the Avengers movies, where I love Thor the most, but really like Tony Stark and Steve Rogers and Bruce Banner so, so, so very much, in the X-Men movies, I mostly love Wolverine.  Oh, I'm quite fond of Professor X, Rogue, and a few others, but not at all to the degree that I like Stark/Rogers/Banner.  Professor X would come the closest, but would I watch a whole movie about him?  Maybe, but only if he was played by Patrick Stewart and not what's-his-name who plays the younger version.
Posted by Hamlette (Rachel) at 5:24 PM