I love playing the piano.  I'm not real great at it, though I used to be fairly good.  Back in high school, when I practiced for an hour every day, and had been taking lessons from my mom for twelve straight years.  Then I went to college and only played things I knew by heart on the piano by the cafeteria while waiting for people to show up for supper or whatever.  After we got married, my mother-in-law stored her piano at our apartment for a few years, but I only played once a week or so.  I had a full-time job working at night, and I didn't want to play late at night during my nights off because we lived in a duplex and I didn't want to bug the neighbors.  Then we moved away and left the piano with Cowboy's sister, who had room for it herself by then.  And I had no piano until we moved to Tir Asleen a little over two years ago.

When we moved here, my mom gave me her piano, which had originally been her mom's.  (And don't feel so sorry for her for giving up her piano -- my dad replaced it with the baby grand he'd been promising her for decades.)  And I was preggers with a giant belly in the way, then had a newborn... and it wasn't until this past spring that I started finding time to play again.  Usually just a few minutes in the morning while the kids finished breakfast after I was done already.  But my goodness, was I rusty!  I played for a couple months that way, then quit over the summer.  This is all The Lone Ranger's fault -- I listened to the soundtrack every morning while making and eating breakfast, which meant I wasn't playing music myself. 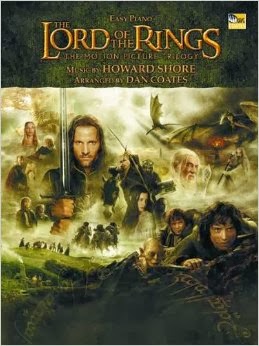 But then last week, I found The Lord of the Rings for Easy Piano on Amazon while searching for something else.  I bought it on a whim, got it early this week... and I love it!  I've slowly been playing through it, backwards because the last song is about Gondor and I was all sad right then over "The Departure of Boromir."  And this music is exactly right for my slowly-returning skills.  I can play the songs well enough to recognize them, but I stumble just often enough to make me want to truly practice them.  I'm almost done playing each song once, and then I'll begin at the beginning and work on one song at a time until I'm able to play them all well.

It has several songs from each movie, with most of my favorite themes represented.  I've actually teared up a bit as particular themes I love so much come to life under my own fingers.  So delightful.

So anyway, those are my happy Friday ramblings.  Have a lovely weekend!
Posted by Hamlette (Rachel) at 4:09 PM

Email ThisBlogThis!Share to TwitterShare to FacebookShare to Pinterest
Labels: Lord of the Rings, music, The Lone Ranger, Tir Asleen, Tolkien