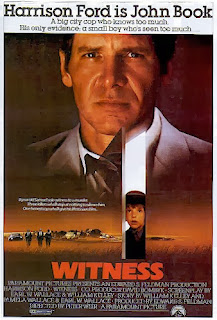 Last weekend was the first time I'd watched this movie in many years.  And Cowboy had never seen it, so it was a great treat to snuggle up with him on the couch and drift back into an oh-so-familiar movie world for the first time in probably over a decade.  When I was in high school, we had a taped-off-TV copy that I watched many, many times.  A dozen at least, I would say.  I still knew almost all the dialog by heart.

And yet, despite being so very familiar with what happens, the finale had my heart pounding and my fists clenched.  It's that powerful.

It all begins with an Amish funeral for a man named Jacob Lapp.  Some time later, his widow Rachel (Kelly McGillis) and young son Samuel (Lukas Haas) embark on a train trip to visit relatives.  In the bathroom of a train station in Philadelphia, Samuel witnesses the murder of an undercover cop. 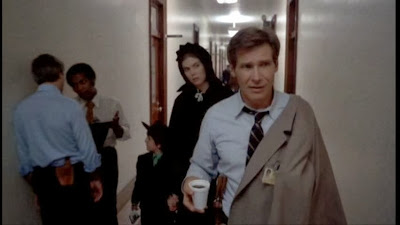 Captain John Book (Harrison Ford) arrives to question Samuel and begin investigating the murder.  Things get exciting and complicated (trying to avoid spoilage here), and a wounded Book ends up driving both Rachel and Samuel back to their Amish farm.  Rachel's father-in-law Eli (Jan Rubes) reluctantly agrees to hide the injured detective, since the people who shot him will be trying to kill Samuel too, to cover up that murder he witnessed. 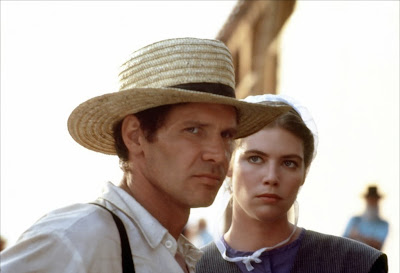 Book convalesces and finds himself attracted to Rachel.  She clearly returns his feelings, and of course this could create big problems if they were to act on their attraction.  I get the feeling that Rachel was not particularly happy in her marriage to the now-deceased Jacob, because... yes, this is Harrison Ford in his prime, but if Cowboy had just died a few months earlier, I don't think I'd be spending time trying to entice the second guy to show interest in me.  I don't think I'd be drinking lemonade on the porch with the neighbor boy either.  This probably just means Cowboy is a far superior husband to Jacob.  On the other hand, Cowboy says that happily married people whose spouses have died are more likely to remarry -- and remarry much sooner -- than unhappily married widowed people.  So maybe this means Rachel and Jacob loved each other a lot.  Who knows.

So then things get really exciting again, and there's a bunch of mayhem and shooting and general exhibitions of manly bravery and quick thinking from John Book. 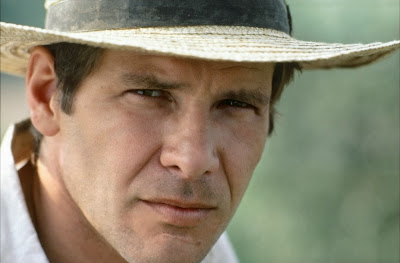 Anyway, why do I love this movie?  Besides the presence of Harrison Ford, I mean.  Partly, it's the fish-out-of-water angle, as I love those kinds of stories.  Partly, it's the forbidden romance -- yes, I'll admit it.  People falling in love who shouldn't is a big sweet spot for me.  (Jane Eyre, Rebecca...)  Partly it's the good-outsmarts-evil-and-saves-the-day.  And partly it's just that the Amish are pretty fascinating.

I think what I might like best, after Harrison Ford, is the way it's filmed.  Peter Weir directed this in an almost orchestral way.  Fields of waving winter wheat, a barn's frame being lifted high into the air, a woman pouring a cup of lemonade -- he brings together all kinds of simple images and turns them into a beautiful symphony, each small piece contributing to the whole.

Is this a family friendly movie?  No.  It's got violence, quite a bit of very bad language, and some nudity.  However, if you have something like ClearPlay or a friend who knows what to mute and fast-forward through, it cleans up easily.  Or a copy you taped off TV, those work really well.
Posted by Hamlette (Rachel) at 10:03 PM