I define fantasy as involving magic or something supernatural somehow.  Which is why you'll find Raiders of the Lost Ark here -- it has all that stuff about the Ark of the Covenant melting people's faces off.  So these aren't necessarily all swords-and-sorcerers stuff, but they do all involve non-real, magical things happening.

Sorry it's taken me like two months to do another of these -- I was going to do superhero movies next, then decided to wait until I'd seen Thor:  The Dark World, and now I think I need another viewing before I can decide if that one goes on the list or not, so... silly me, I can do a genre other than superheroes!  Some of the titles link to previous posts about those movies. 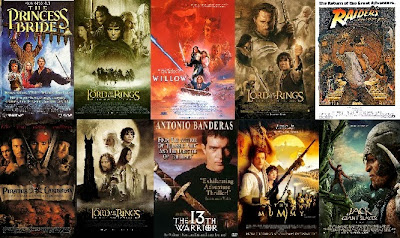 After Buttercup's (Robin Wright) true love Westley (Cary Elwes) is murdered by pirates, she agrees to marry Prince Humperdinck (Chris Sarandon), but gets kidnapped before the wedding.  I'll never forget the first time I saw this movie -- it changed my ideas about humor and fantasy forever.

Nine companions from the four races of Middle Earth begin the journey to destroy the One Ring and thus defeat evil Lord Sauron and his plans to take over the world.  But you knew that already, didn't you.

Two companions from the two races of someplace-or-other journey to protect a baby princess and thus defeat the evil Queen Bavmorda and her plans to take over the world.  Basically George Lucas' version of The Lord of the Rings, but Val Kilmer is so awesome it doesn't really matter that it's kind of a rip-off.

The final battle for Middle Earth results in the (very spoily) title.  But you knew that already, didn't you.

Dr. Indiana Jones (Harrison Ford), noted professor of archealogy, spends more time out chasing down antiquities that have mystical powers (or are worth lots of money) than he does teaching classes.  Who can blame him?

Captain Jack Sparrow (Johnny Depp) resorts to commandeering, raiding, pillaging, plundering, and otherwise pilfering his weasely black guts out, all to regain his beloved ship.  More fun than a barrel of undead monkeys!

Eight of those nine companions keep trudging around Middle Earth, trying to destroy the One Ring and defeat Sauron, etc, etc, and so forth.  But you knew that already, didn't you.

An Arab exile (Antonio Banderas) joins a band of Norse warriors in their bold attempt to defeat the freaky bear-men-things that are attacking a bunch of small villages.  Swords and danger and glory galore!

A librarian (Rachel Weisz) and her brother (John Hannah) convince an adventurer (Brendan Fraser) to lead them on an archaeological expedition that quickly gets way more exciting than they ever expected.  I like the sequel almost as well.

Peasant Jack (Nicholas Hoult) and career soldier Elmont (Ewan McGregor) rescue a princess (Eleanor Tomlinson) and defeat a race of giants.  The best of the recent spate of updated fairy tales that I've seen.
Posted by Hamlette (Rachel) at 11:01 AM