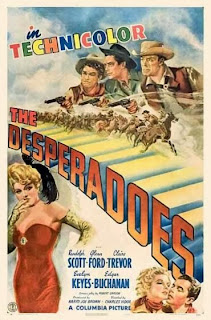 This is another of those B-grade westerns that I enjoy so much.  It's not pretending to be Great Drama, it's simply telling an exciting story the best way it knows how.  And it surprised me in one way:  I quite enjoyed Randolph Scott's performance!  Usually he kind of bores me, but he had a good-but-not-pure character here that intrigued me.

Okay, so the story is this:  Cheyenne Rogers (a still-baby-faced Glenn Ford) keeps trying to go straight after getting mixed up in some unsavory business years ago.  Only whenever people find out who he is, they assume he's up to no good and throw him out of town.  (This might be because of his habits of things like trading a worn-out horse for a fresh one at gunpoint or using phony names like "Bill Smith."  I'm just sayin'.)  Anyway, he winds up in a town where one of his good friends is The Sheriff (Randolph Scott).  The bank got robbed a few days earlier, and he's suspected of it because of his lawbreaking past.

And yes, it was a little disconcerting to hear Glenn Ford called Cheyenne, as that's a name I associate with the character Cheyenne Bodie played by Clint Walker in one of my favorite western shows.  But Ford wore it well, so I got used to it after a while.


Being played by Glenn Ford and all, Cheyenne Rogers has two women vying for his attention:  a childhood friend called The Countess (Claire Trevor) who runs a local dance hall, and the fresh and innocent Allison McLeod (Evelyn Keyes), who helps her dad (Edgar Buchanan) run a livery stable.  Allison's been kind of keeping company with The Sheriff, but you can guess what happens when Rogers hits town.

Now, you're going to be shocked when you read this, but there is a character in this movie that I like even better than Ford's.  That's his comic sidekick "Nitro" Rankin, played by Guinn "Big Boy" Williams.  He was sweet and loyal and brave and trustworthy (or as trustworthy as a guy who blows up bank safes can be), and whenever he was on screen, I paid him 95% of my attention.  I have a soft spot for really big guys who get used for comic relief (think Dick Peabody as Littlejohn on Combat!), so that's probably why.


Is this a family friendly movie?  It's got some rootin'-tootin' western shootin', but other than that and a couple low-cut dresses on The Countess, you betcha!
Posted by Hamlette (Rachel) at 5:15 PM