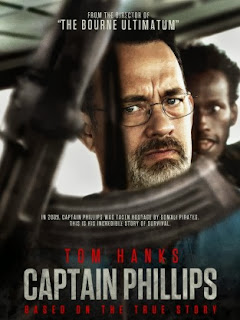 I don't know quite what to say about this movie.  The acting was rather brilliant.  Some of the dialog was atrocious.  I spent half the movie wishing I wasn't watching it, and the other half forgetting that I was only watching a movie and not actually in grave danger.  Three-quarters of the way through it, a very minor character popped up and had me fervently wishing he would be in more and more and more scenes.  So I guess I can say it's an uneven movie, worth seeing if you're a devoted fan of Tom Hanks, dramas based on real-life situations, or very shaky camerawork.

Okay, by the end of the first ten minutes, I was almost ready to walk out.  And I have never walked out on a movie.  Ever.  I'm too much of a skinflint -- I'm going to get my $7 worth, blast it!  But the opening scenes contained some of the worst dialog I have ever heard in a major motion picture.  Captain Richard Phillips (Tom Hanks) and his wife Andrea (Catherine Keener) have a conversation in their minivan on the way to the airport that made me want to jump into the movie and put my hands over their mouths.  This conversation might not bother you at all, so don't stay away just because it drove me nuts.


And then the Navy SEALS got called in to assist some Navy ships in rescuing Phillips, who wound up as a hostage, and things improved vastly.  Because the SEAL Commander is played by Max Martini, and as soon as he strode on screen, I remembered him from a couple eps of Castle, where he played a terrible bad guy that I found disturbingly fascinating.


And he kind of hijacked my brain, or half of it anyway.  And while half of me was paying attention to the movie, half of me was whirling around as a brand new character took shape before my inner eyes, Max Martini in a dark brown duster and cowboy hat, with a mean look and really nice boots.  By the time the credits finished, I had all kinds of ideas for a new western story, with four characters and the beginnings of a plot.

But anyway, I actually kind of hated the movie's ending.  They rescue Phillips at last, in a pretty gruesome and horrible way, and they take him aboard the Navy ship, and he's all in shock and breaking down in tears, and I wanted someone -- anyone! -- to put their arms around him and let him cry.  And no one did!  He so obviously needed the comfort of human touch, just a simple hug, and nope, he had to tough it out, sorry, buddy.  Grr.

That's probably a kind of incoherent review, but it's about all I've got for you, sorry.

EDIT:  Forgot to say if this was family-friendly.  There's some bad language, but not The Biggie, and a lot of danger and suspense.  The violence is mostly threatened, not enacted, though there's a scene of someone getting beaten up.  There's a good bit of blood here and there from non-life-threatening wounds.  And at the end, the "gruesome and horrible" rescue I just mentioned is mostly implied.  You don't see dead bodies.
Posted by Hamlette (Rachel) at 4:27 PM