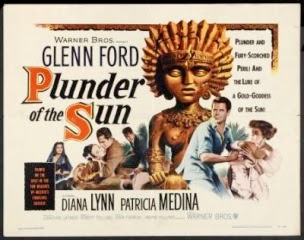 My goodness, Glenn Ford is delicious in this!  Totally makes up for the fact that this movie is kind of a patchwork quilt of different genres.  First, it's noir, then it's a history lesson, then it's a treasure hunt adventure, then it devolves briefly into a soap opera, and somehow it manages to wind all that up with a zippy conclusion.  If you are now scratching your head and going, "Huh?" be assured that I was doing the same thing while I watched this.


And yet it all holds together thanks to Glenn Ford, by then a veteran actor with nearly 40 films under his belt despite being only 37.  His charming likeability means I don't really care that they never explain why an American insurance adjuster is stranded in Mexico, why said insurance adjuster is so deft at punching people and handling guns... I don't care.  I just want Glenn's character, Al Colby, to survive and get away from all these wacky people.


And by wacky people, I mean the femme fatale who's actually rather sweet...


...the weirdo blond dude wearing sunglasses who switches from ally to enemy several times (and possibly bats for the other team, but that's subtext, let's not go there)...


...this movie is jammed with odd characters, and if three of them turn out to be embroiled in a revealed-for-no-reason love triangle... I don't really care about that either.


The filmmakers were very proud of the fact that they shot lots of this movie on location in a foreign country, which is kind of normal to us now, but not so much back in the '50s.  A huge chunk of the movie takes place in these ancient ruins, including a lot of exposition and some history lessons, just because they were having so much fun walking around on location.


Is this movie family friendly?  Er... there's a lot of sexy subtext, but nothing overt there.  One female character is drunk in nearly every scene (at least, I assume that's why she's so off-balanced).  There's a good bit of drinking and smoking, and some violence, both fisticuffs and gunplay.  But I don't recall any bad language, though there might have been a couple minor words I'm forgetting.  This doesn't get dark, and I could see myself watching this when I was eleven or twelve and thinking it was an awesome adventure.