My Ten Favorite New-to-Me Movies of 2019

In 2019, I watched 102 movies.  Not 102 separate titles, as I am a major re-watcher, but I sat down and watched a movie 102 times. T'was a happy year.  As always, I'm here with a retrospective in the form of a list of the 10 new-to-me movies I liked best this past year.  Titles are linked to my reviews where applicable. 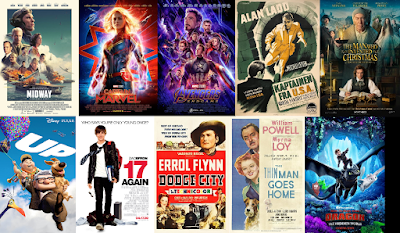 1. Midway (2019).  Faithful, dazzling, elegant presentation of the early Pacific Theater of Operations during WWII, from the attack on Pearl Harbor on December 7, 1941, through the Battle of Midway June 4-7, 1942.  I love this movie so much, I've put it at #14 on my list of my 100 favorite movies.  I've seen it in the theater four times now, and I'm aching to see it again.

2. Captain Marvel (2019).  This movie is just plain, unadulterated fun.  A woman (Brie Larson) learns the truth about her identity and sets about undoing all manner of injustices she was an unwitting part of.  Yes, it's a superhero movie, but it speaks to the universal longing for self-knowledge and finding your true place and purpose.

3. Avengers: Endgame (2019).  I'm okay now.  I was not okay after Avengers: Infinity War (2018), but I am okay now.  The Avengers have triumphed.  The saga is basically complete, and I will tentatively be interested in the MCU going forward, but I might be okay just letting the story be done here for me.  We'll see.

4. Captain Carey, USA (1949).  An OSS agent (Alan Ladd) gets betrayed to the Nazis while on a mission in Italy.  When the war is over, he goes back to seek vengeance for the death of the woman he loved, only to discover that much of what he thought he knew about that fateful night was a lie.  Ladd is the best part of this movie, but it's still a solid watch even if you're not his fan.

5. The Man Who Invented Christmas (2017).  Charles Dickens (Dan Stevens) needs money.  And he needs his career to stop fizzling.  And he needs these grumpy characters in his head (especially Scrooge, played by Christopher Plummer) to cooperate.  And he needs people to stop pestering him so he can just write his next book.  I was WAY more charmed by this movie than I expected to be!

7. 17 Again (2009).  Middle-aged guy (Matthew Perry) thinks his life would have been so much better if he'd only fulfilled his potential as a basketball player after high school.  Then he gets turned back into his 17-yr-old self (Zac Efron) and sees his life in a whole new light.  I thought this movie would be dumb, but wound up totally digging it.

8. Dodge City (1939).  A cowpuncher (Errol Flynn) becomes a lawman so he can bring law and order to Dodge City.  And also to gain the respect of a woman (Olivia de Havilland).  My first Errol Flynn western!  Won't be the last, I assure you.

9. The Thin Man Goes Home (1944).  Nick (William Powell) and Nora (Myrna Loy) visit Nick's hometown, where he gets no respect, no respect at all.  But he does get to solve a mystery.

10. How to Train Your Dragon: The Hidden World (2019).  Every story has a ending, including Hiccup and Toothless's.  This movie also makes me cry, but I like it anyway.  So do my daughters.  My son hates it.

Special Mention: They Shall Not Grow Old (2018).  Peter Jackson's haunting presentation of WWI that transcends the documentary genre.

What wonderful movies did you discover this year?  Did you see any of these?

If you want to see my lists from 2014 through 2018, there are links to them at the bottom of my "Ten Favorites Lists" page.

Here's to a new year of watching movies!
Posted by Hamlette (Rachel) at 4:10 PM