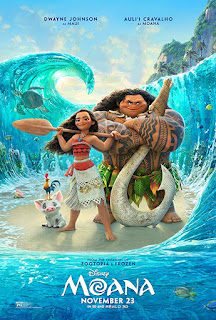 Yes, I've finally seen this!  Squeezed in one last new-to-me movie before the end of the year :-)

Overall, I enjoyed it, but I didn't love it.  I might have loved it if we hadn't had twenty minutes of nonsense in the middle of it -- that crab did not need a song-and-dance routine, and those coconut critters were pointless.  But the middle and the end were good.

And Dwayne Johnson was hilarious.  Even with just his voice present, he was still the best part of this movie.  Like he is with every movie.  In fact, of the 11 things I've seen him in, the only one he wasn't the best part of was The Mummy Returns (2001), and that was his first movie, so let's all cut him some slack on that one.

Know what else I really dug about this movie?  That Moana was strong-willed, but not rebellious.  I mean, you could boil this movie down to "royal daughter disobeys father to follow dream," and it would sound just like The Little Mermaid (1989), which I hate.  Because Ariel is a foolish, rebellious child, and everyone acts like she's a great heroine.  No, she's not.  So yeah, that's a hard thing to portray, being strong-willed without being rebellious and defiant.  I think the difference is, Moana isn't selfish.  She's not following her dream because doggone it, that's what SHE wants!  And she needs to get what she wants!  Nope, she disobeys her parents in order to save her people.  Also, you know, she's an adult and a leader, and she's doing what leaders are supposed to do: make hard choices and lead by example.

Anyway.  Yeah.  I wouldn't mind watching this with my kids sometime, and a second or third viewing might bump it up in my estimation.  Especially if I can fast-forward through a couple chunks of the middle.
Posted by Hamlette (Rachel) at 5:27 PM