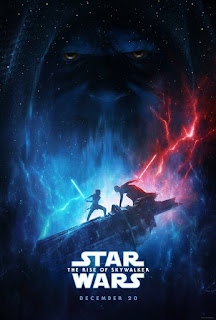 Thanks to my intense feeling of ho-hum-ness regarding The Last Jedi (2017), I went into Rise of Skywalker with very few hopes.  Aside from the hope that it would make sense of this trilogy, if possible.

And happily, it did make this trilogy make sense.  Honestly, it's no worse than the prequels.  Not better either, overall, even though The Force Awakens (2015) was awesome.  I mean, I guess that does make it better than the prequels, since none of them were awesome, though I liked Revenge of the Sith (2005) enough to go see it three times.

Overall, I found this movie emotionally satisfying, and I'm good with that.  I didn't love it, but I didn't hate it, and I feel like that's a win.

Anyway.  Um.  Spoilage below, as I'm mostly just going to talk about the things I did like, and the one thing I loved. 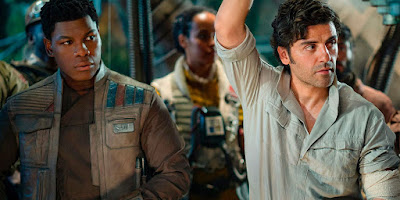 OBVIOUSLY, the one thing I loved was Han Solo (Harrison Ford) appearing to his son in a... vision?  Dream?  Imagining?  thing.  That scene, I loved so much, I could see myself watching this movie again just for it.  Everything there pleased me.  Ben Solo (Adam Driver) echoing his words from the moment he killed his father in The Force Awakens, but meaning something totally different with it.  Him not being able to tell his father he loved him, but Han saying, "I know," and we all know what he means by that.  Ben flinging his lightsaber into the sea. (At which point, I was like, "CRAP!  All of a sudden, I like him, and now he's gonna die.  Phooey.") 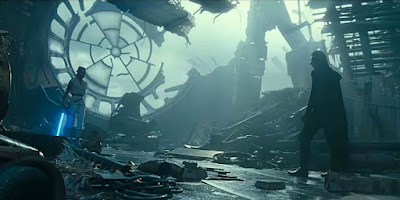 I like that Leia (Carrie Fisher) was an active part in bringing her son back to the light side.  Her using all her life force to save Ben nicely foreshadowed him doing the same to save Rey.  I like that sort of thing.  And I reeeally liked the flashback of Leia training to be a Jedi with Luke when they were young.  That was nifty.

Also, Poe (Oscar Isaac) was really hot in this.  I don't remember him being this hot before.  Yummy.

Finn (John Boyega) felt a little shunted off to the side at times, but him meeting up with other former Storm Troopers and bonding with them was excellent.  And I love that he and Poe got to just hang out and have adventures together again.  I missed that so much in The Last Jedi.

Honestly, I saw this before Christmas, well over a week ago, and my memories on it are fading.  I went to see Midway again yesterday (twice!), and that's what most of my mind is focused on.  But I promised a few people I'd write up my thoughts on this, so... now I have :-)
Posted by Hamlette (Rachel) at 1:00 PM