To be honest, when I first found out they were making a new movie about the Battle of Midway, my first thought was, "Why?  We already have a movie about Midway.  Do we really need another one?"

I gushed and gushed about this movie after my first time seeing it.  I've seen it twice now, and yup, I still say this is the best new-to-me movie I've seen all year.  It's so well-crafted in every way.  The writing is smart, the acting is stellar, and the special effects leave me breathless.

One of the things I like best about this movie is how it starts before the attack on Pearl Harbor.  It shows that, plus some other naval engagements that followed, and even included Doolittle's Raid!  That really helped the audience understand how important Midway was in so many ways, not just the military aspects.  Like how emotionally invested people on both sides were, and how they were mentally engaged in this.  Beautifully done.

But what I loved best, of course, were the people.  I don't want to call them characters, since these are actual people being portrayed but, as always, it's the people that make me love it.  So I'm going to spend the bulk of this review talking about them. 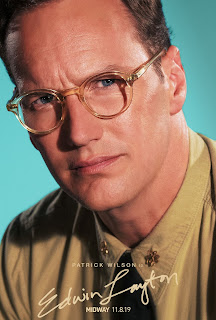 After two views, I basically love everybody in this film.  You know who I love most, though?  Edwin Layton (Patrick Wilson).  I didn't even know Patrick Wilson was in this -- really, all I knew going in the first time was that Luke Evans was in it and DKoren was wild about it.  And, you know, that it was about Midway, obviously.

So Wilson showed up onscreen, and I was like, "DUDE!  Is that Patrick Wilson?!?"  Because really the only thing I've ever seen him in before is The Phantom of the Opera (2004), and I've always been bummed he hasn't made other things that interest me, besides that and The Alamo (2004), which I still haven't seen.  So I was all excited the he was in this too.  And by the end of the first viewing, Layton had tied with Best and McClusky as my favorite person in it.  (More about the other two in a minute.)

By the end of the second viewing, Layton was far and away my favorite.  He's quiet, intelligent, and stubborn, and he's using everything within himself to help others.  How am I not going to love a guy like that?  Made-to-order for me. 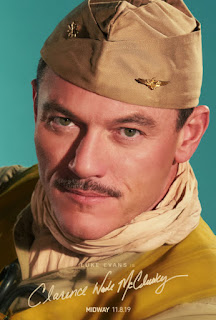 Now, let's all be real: the reason I went to this movie in the first place was Luke Evans.  I've been looking forward to this movie for months because I knew he was in it.  I love WWII movies and learning about WWII history, so having one of my favorite actors portray a real WWII hero?  Yes, please!

I was kinda worried he would have a tiny role, but nope!  Wade McClusky is an important part of the story and plays a pivotal role in the Battle of Midway itself.  He's mostly stern and kinda has that by-the-book thing going on, but once in a while, he gets all sassy, and I laughed aloud over several of his lines.

Props to Luke Evans for his good American accent (though I missed his delicious Welsh cadence, to be honest).  Also, he has the best mustache in the whole movie. 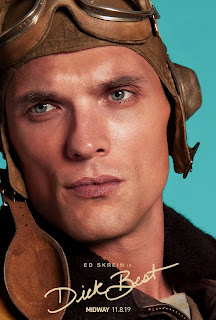 Dick Best (Ed Skrein) is about as close to a Main Character as this movie has -- it's very much an ensemble piece.  Still, I think we see more of him than anyone else, and I'm totally cool with that because Best is... aptly named?  He's a spectacular pilot, but also a really intriguing person with some nice layers to him that we slowly peel back as the movie rolls forward. 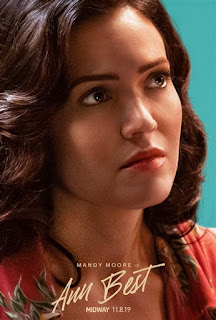 Dick Best's wife Ann (Mandy Moore) is also awesome.  We don't see tons of her, but she's a strong, direct, loving woman, and she's a great glimpse for us of the Home Front.  The only other thing I know Moore from is Tangled (2010), and that's only her voice, but I found her a pleasing actress who really fit the look of the 1940s.  That's not always easy for modern actors and actresses, but I think they did really well with their casting for this -- especially Moore and Skrein. 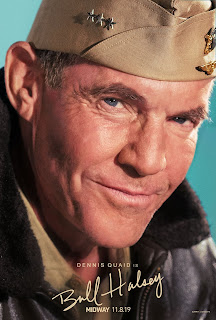 Oh my word.  Halsey (Dennis Quaid).  Wow.  What an amazing naval commander!  I love his dedication, his fierceness... he has such great Warrior vibes.  And he was crotchety without being querulous, feisty and yet calm.  I think the only other things I've ever seen Quaid in are Wyatt Earp (1994) and The Long Riders (1980), and he just wasn't memorable in those, but wow.  He's memorable in this. 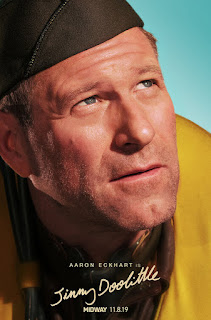 I already knew a little bit about the Doolittle Raid, where James Doolittle (Aaron Eckhart) and a bunch of other American pilots bombed Tokyo and then landed in China and had to find their own way out.  I know a little more about it now, thanks to this movie, but it's something I want to read more on.  Soon.

Eckhart is another actor I've seen in a couple things, and I just have never cared for him, but I think he just had to grow into his face, if that makes sense.  Now he's almost got a William Holden vibe going on, and I liked him a ton. 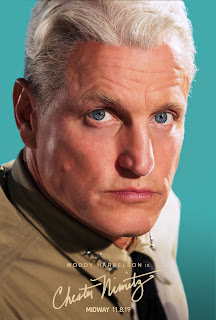 What can I say about Nimitz (Woody Harrelson)?  He's like a white-haired bulldog. and he was just... the right man at the right time in the right place.  Which I did know already, though I admit I have studied the ETO (European Theater of Operations) waaaaaaaaaay more than the PTO (Pacific Theater of Operations) because... the ETO is where Combat! takes place, which means it's where all the fanfic I've written is set, so when I read WWII history books, I tend to focus there.  I mean, I knew who won the battle of Midway, and I knew quite a bit about the bombing of Pearl Harbor, plus a little about Doolittle and Nimitz, but most of what this movie gave me was excitingly new and fresh.

Anyway.  I've never cared much for Woody Harrelson, though I don't mind him in Solo: A Star Wars Story (2018).  But he had a sort of stubborn, patient aplomb here that I really dug. 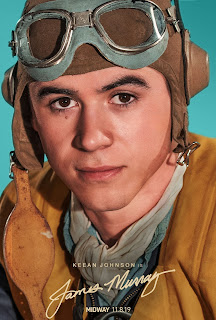 Awww, Murray.  Awwwwwwwwwwwww.  I love this kid's character arc.  I started out feeling a little annoyed by him, and then I end up just wanted to give him a hundred hugs.  And a warm chocolate-chip cookie.  Possibly also a blankie. 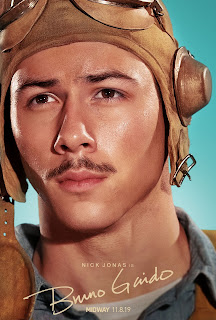 I really don't know anything about the Jonas Brothers except that they're brothers whose last name is Jonas, they sing, and I guess now one of them acts too.  I didn't know who was playing Bruno my first viewing, I just knew he was a really snarky, spunky character that I grew incredibly fond of in a very short time.

I can't say anymore without actually spoiling stuff, so I... won't. 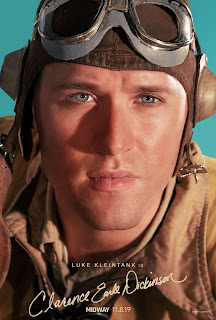 Dickinson (Luke Kleintank) is sort of that quintessential Good Guy, and he gets one of the best lines in the whole movie, one that makes everyone in the theater crack up. 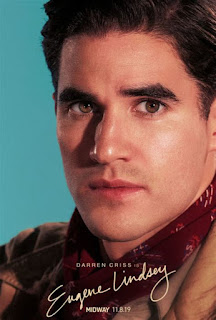 Lindsey (Darren Criss) is kind of a bit of an antagonist for a while, always squaring off with Dick Best... but I like him okay by the end.  I like that he adds some interpersonal tension to show that all the Americans weren't just one big, happy family aboard an air craft carrier. 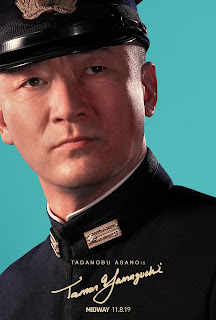 The movie did a really good job of portraying some of the Japanese officers too.  Especially Yamaguchi (Tadanobu Asano).  He has the nicest smile, and I got so fond of him.

I didn't realize it until DKoren mentioned it, but I've totally seen Asano in stuff before!  He played Hogun, one of the Warriors Three, in all three Thor movies!  Once I knew that, when I went to the movie the next time, I could totally see it.

I'm really glad that the filmmakers didn't demonize the individual Japanese military characters.  They do talk about some atrocities committed by the Japanese Army as a whole, but the individuals were just... people.  So much more effective than making them all look like monsters. 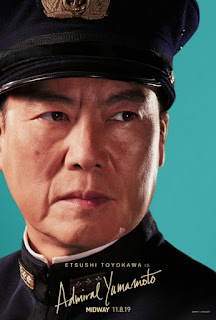 Finally, Admiral Yamamoto (Etsushi Toyokawa).  I felt really sorry for him at several different times because of how other Japanese leaders were treating him.  He was smart and cagey and savvy, and mostly he got ignored or disregarded or even disobeyed.  Like, what?  Can you people not see how intelligent this guy is?

So.  I think the only thing I haven't said yet about this movie is how thrilling and stupendous the battle scenes are.  Especially the parts with the dive-bombers, where you're just plummeting out of the sky.  Like, how could anyone ever be brave enough to fly a plane into all those bullets and all that shrapnel?  Wow.  I came out of this film both times in absolute awe of the real-life people portrayed here and what they faced.

Also, it's a very pretty movie.  It doesn't make everything look bleak or harsh.  But it doesn't sugar-coat war either.  Amazing film.  I want to see it again, though I'm afraid i might have to wait for DVD cuz my life is getting very busy for a while.
Posted by Hamlette (Rachel) at 2:57 PM