For more than a decade, Harrison Ford was second only to John Wayne in my list of favoritest of favorite actors.  Though Hugh Jackman and then Alan Ladd eventually supplanted him in that spot, he's still my #4, and I will not cease to hold him dear, of that I'm certain.

Prompted by Eva ranking all the Harrison Ford movies she's seen over at Coffee, Classics, and Craziness, I hereby present my ten favorite Harrison Ford films.  Some of these, I've seen so often, I've got them memorized.  In fact, the last two are the only ones where I can't quote basically the whole movie right along with the actors. 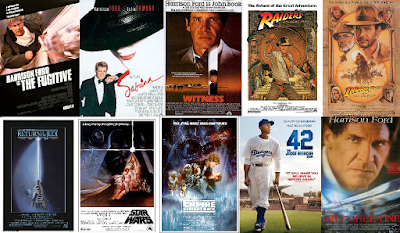 As always, titles are linked to my reviews where applicable.

Dr. Richard Kimble (Harrison Ford) is wrongly convicted of his wife's murder, escapes, and goes hunting for the real killer while U.S. Marshal Sammy Gerard (Tommy Lee Jones) hunts for him. My second-favorite movie of all time.

When Sabrina (Julia Ormond) returns from Paris, suddenly dazzling instead of dowdy, her father's employer (Harrison Ford) pretends to woo her to prevent his younger brother (Greg Kinnear) from having a fling with her. A lot sweeter than it sounds, and I much prefer it to the 1954 original because the cast has better chemistry and the whole thing works better.  I wrote a Femnista article about it a few years back, which you can read here.

Detective John Book (Harrison Ford) goes undercover to protect a little Amish boy who is the only witness to a murder. Taut and sweet at the same time, and one of the very, very few R-rated movies I own.

Archaeologist/adventurer Dr. Indiana Jones (Harrison Ford) tries to keep the Ark of the Covenant away from the Nazis.  One of the finest adventure movies ever made.  I had the deep joy of seeing this on the big screen a few months ago, and it was even more spectacular there than I had hoped.

What's better than one Dr. Jones?  Two Dr. Joneses!  Indy and his dad (Sean Connery) try to keep the Holy Grail away from the Nazis.  The chemistry between the two of them is as perfect as possible.  This movie makes me laugh so much.

Luke and Leia rescue Han, Luke and Han rescue Leia, Lando and R2-D2 rescue everyone at once... and that's only the first sequence, which happens to be my most favoritest part of all the Star Wars films. In fact, I've seen the first 40 minutes of this more often than any other segment of any Star Wars movies.

An idealist (Mark Hamill), a princess (Carrie Fisher), a smuggler (Harrison Ford), and an aging hero (Alec Guinness) help the Rebel Alliance take out the Empire's greatest weapon. What can I say about it that hasn't been said a billion times before?  I call it Star Wars in my head, and always have to fumble around to find the title A New Hope because, until the prequels, it was never called that.  At all.  By anyone I ever knew.  It's just Star Wars.  The rest are Other Star Wars movies.

Luke learns the truth about his parentage, Han and Leia try not to fall in love, and the Empire tries to figure out what hit them. I like half of this movie a lot (the Han + Leia parts) and am bored by the other half.

Branch Rickey (Harrison Ford) hires Jackie Robinson (Chadwick Boseman) to play baseball for the Brooklyn Dodgers, making him the first black man to play in the all-white baseball league.  It's one of the best biopics I've ever seen, and possibly the best acting I've seen from Harrison Ford.

A terrorist (Gary Oldman) hijacks the presidential airplane midflight, taking the President (Harrison Ford) and his family hostage. The President is not amused.  He spends the rest of the film trying to get the terrorist off his plane while keeping his family safe.  Thrilling heroics abound.  Another of the very, very few R-rated movies I own.