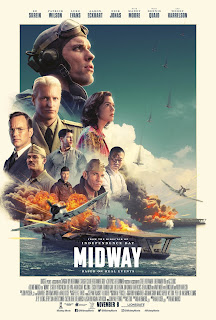 You need to go see this movie.

I am not even kidding.

I don't care if you never go see movies in the theater, or if you aren't a fan of WWII movies, or if you don't like war movies at all.  Everyone should see this movie.

I'm so not kidding.  This is the best movie I have seen all year.

Yes, better than Avengers: Endgame.  Not even in the same ballpark.

Midway is up there with The Longest Day (1962) as one of the very best war films I have ever seen.  Likely one of the best ever made.  It is staggeringly good.

And you know one of the things I loved most about it?

It had no big, modern agenda.

Think about that a minute.  No agenda.  No trying to shoehorn modern sensibilities and prejudices and ways of thinking into the presentation of a historical event.

And it does not demonize their enemies.  The Japanese soldiers are shown to be equally courageous and equally intelligent.  The closest to demonization it ever comes is showing that the Japanese military were targeting Chinese civilians.  It lets you make up your own mind about that, it doesn't dance around waving fingers.

I cannot praise this movie highly enough.  It has only one flaw, which isn't so much a flaw as something I wish it didn't have.  One f-word.  But it's used in exactly the way, exactly the moment that such a word is, to be honest, kinda called for.  (There's some other cussing too, but the level that you'd find in a 1960s war movie.) (EDIT: Okay, it does have quite a bit of cussing.  I counted 49 cuss words, my second viewing.  So more on par with a 1970s war movie.  But it... is not gross and nasty cussing, just military dudes speaking their vernacular, if that makes sense.  I didn't realize how much there was because it just didn't bother me.)

Anyway.  The acting, the filming, the pacing, the music, the costumes, the writing -- everything was staggeringly wonderful.

Go see it for yourself.  I almost never say "everyone should see this movie" because most movies, not everyone needs to see.  Personal tastes and interests make that nonsensical, really.  But this movie?  You need to see it.

(I have SO many other things I want to say about Midway, like how wonderful Luke Evans and Patrick Wilson are, how it's the best acting I've ever seen out of Woody Harrelson, and so much more.  But I'm going to hold onto all of that until I've seen it a second time so I can give it a proper review.)