Biopics are always tricky to balance.  You've got to remain fairly faithful to a the real events of the person's life, because if they're famous enough to have a movie made about them, they're famous enough that a LOT of people know a LOT about them.  They will be quick to point out your errors if you deviate too far from fact, or if you spin a story to suit an agenda that the person in question was not a part of.

But you also have to make the story of a real person's life interesting.  And real life has a lot of boring parts.  Even the real life of a famous, courageous, heroic person.  You need to tell a cohesive story with a beginning, a middle, and an end, and some central message or point to your story.  Real life often lacks cohesion, messages, and points.  But a biopic is not a documentary -- it promises good storytelling, not a recitation of facts.  So you need to find a way to portray a person's life within the framework of a story.

Also, you need to be telling the audience something new, something that makes your movie worth seeing for those who are familiar with the story of your subject's life.

So much to balance.  So tricky.

So few biopics manage to balance all of that successfully. 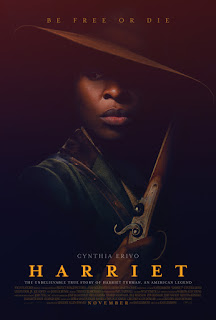 I went to see Harriet (2019) this weekend.  Now, most of what I know about Harriet Tubman, I learned by reading my copy of Freedom Train (by Dorothy Sterling) over and over as a child.  I'm going to remedy that shortly -- I've put several books about her on hold at the library, but none of them are in yet.

Anyway.  I re-read Freedom Train today so I could refresh my memory as to the actual facts of Harriet Tubman's life.  It's a biography for kids, told like a story, but I trust it more than I do a movie, to be honest.  I'll review it on my book blog soon, on its own.  But if you're looking for a quick way to introduce yourself or a kid to Harriet Tubman's life, it's an excellent resource.

Okay, so the basic facts as presented by the movie were correct.  Harriet Tubman was born a slave in Maryland, escaped as a young woman, then became a conductor on the Underground Railroad and went back into the slave states to bring out her siblings and parents, plus many more.

But you know movie makers.  They love to spice things up.  I don't mean that in a sexual way, in this case, but in a "let's add something weird to make this movie more interesting."  As if the story of this brave, stubborn, intelligent woman wasn't actually interesting enough.  They took the fact that Harriet Tubman suffered a head injury that made her randomly fall asleep and they twisted that, giving her visions from God that aided and guided her.  They made her seem like a mystical, possibly delusional woman, and other characters dismiss her as crazy or brain-damaged or imagining things.

HOW IS THIS BETTER than the truth, that Harriet Tubman was a woman of indomitable courage and solid faith in God?  I think they were trying to make her seem "special" and "gifted," but to me, it does the opposite.  It makes it look like it's God, not Harriet Tubman, who's leading people to freedom.  They robbed her of her dignity and free will and turned her into a sort of sideshow curiosity.  In my opinion.  I was not a fan of this choice.

[EDIT: According to the book She Came to Slay by Erica Armstrong Dunbar, Harriet Tubman did say she experienced visions when she was unconscious, which she believed came from God and often served as warnings about bad things about to happen.  So there is some basis in her life story for how they portray this in the film.  However, that book didn't say she ever invited the visions the way they show in the film, and they used these visions FAR too often as a sort of Deus ex machina to suddenly avert disasters, so I still say it's weak storytelling/writing.]

Now, the film on a whole is really good.  There are some amazing chase scenes, there's overall a lot of excellent acting, the music is great, and the pacing was very good indeed.  Cynthia Erivo portrays Harriet as fierce and yet frightened, and I was fully invested in her portrayal, with the exception of the mystical visions from God, which I blame the screenwriters and so on for, not her.

Is this movie family friendly?  Wellllllllllllllllll... there's no nudity, and most violence is implied... but there's some pretty bad language (including the F-word), there are a lot of very tense chase scenes, some discussion of white masters having slave children who look like them, mention of young girls being raped, talk of spending money on whores, and several instances of seeing people's scars from whipping, burning, or other violence.  So I'd say it's not for children or younger teens.
Posted by Hamlette (Rachel) at 5:32 PM