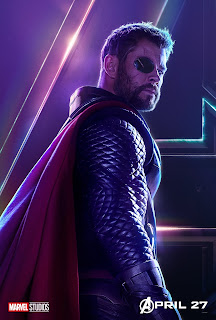 This isn't exactly a review, but more of just me putting my thoughts and feelings about the movie down someplace.  Also, I will probably post stuff that could be considered spoilage.  Movie has been out for like a month now, so I figure if you're going to see it, you've had your shot, and if you haven't seen it and still care about spoilers, you can just not read this post until you're done, right?

I went to see Avengers: Infinity War again today.  Second time.  First time, I came out feeling like I'd been run over by a steamroller.  Just wrung out and hung up to dry.  So emotionally exhausted.  My best friend had the opposite reaction:  she came out feeling like she was ready to conquer the world.  This intrigued us.  It always fascinates us when we have opposite reactions to things, or similar reactions for opposite reasons.  So I'm sure we're going to ponder and discuss this for a long time.

Anyway, I spent lots of time thinking about the movie, listening to her reasons why she loves it, reading other people's thoughts, and generally wrapping my head around the story Marvel Studios unleashed on us here.  I have a deep desire to like the MCU movies, mostly because I've got these characters so tangled up in my heartstrings now.  And, for the most part, I do like the movies.  I don't love all of them, but I love a lot of them, and I enjoy just about all of them in some way.  Enough so that I own every single one of their movies so far.

It's entirely possible that the next movie will make me reverse my feelings on this one.  Put together, they might form one glorious whole.  But right now?  Nope.  I'm not sitting here eating brownie mix straight out of the bowl because this movie made me happy, I'm doing that because I need to be consoled after it, and brownie mix is a good source of consolation.

Although I don't like this movie, I can appreciate it.  It's incredibly well-made.  The writing is breathtakingly good.  Tight, focused, single-purposed, and inspiring.  The acting is never less than excellent, and sometimes astonishing.  Robert Downey Jr. and Josh Brolin in particular really wowed me this second time through.  Alan Silvestri's score is so good that I'm thinking I'll buy the soundtrack, which is kind of rare for movies I don't actively like/enjoy.

So right now, you're thinking to yourself, "But Hamlette... you love Hamlet.  That's sad."  True.  But it's a good sad.  And I'm trying to figure out how to define the difference.  Because I can fiercely love and even enjoy desperately sad stories like Hamlet and Logan (2017) and Rogue One (2016).  And I think the difference between them is that, the sad movies I love are sad because someone dies for a reason.  Hamlet and Logan and Cassian and Jyn and other tragic heroes I love -- they die to accomplish something.  And yeah, Heimdall and Loki do that too in this.  I mourn them, but in a good way.

But everyone else?  Died because a homicidal monster snapped his fingers.  And that makes me angry.  And being angry about an MCU movie makes me sad.  So it's a TOTAL different kind of sadness.  And not at all the enjoyable kind.  And that's why I don't really like Infinity War very much.
Posted by Hamlette (Rachel) at 4:10 PM