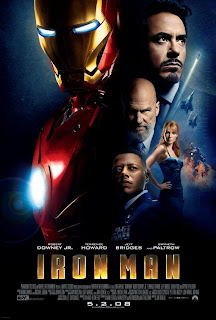 This was my third time seeing this, and I enjoy it more each time.  I'm mildly annoyed with myself for refusing to see it for so long -- I had this total loathing for Robert Downey Jr. based solely on his character in U.S. Marshals (1998).  In fact, until I saw The Avengers last summer, the only other thing I'd ever seen him in was Richard III (1995), which I totally forgot he was in until someone reminded me.

But, as happens to me from time to time, I have had a 180 reversal of my opinion on him, and I now actually quite enjoy his acting!  I'm not quite to the point where I go seek out movies because he's in them, but I no longer avoid things just because of him either.

After I fell in love with The Avengers, I found and watched most of the movies that precede it, including this.  Then I watched this again with my husband.  And this weekend, I got in a big Avengers mood, partly because Iron Man 3 is coming to DVD in a couple weeks, so we watched this, and next week we'll watch Iron Man 2, and then the week after that we'll be able to watch Iron Man 3.

So anyway, I like so many things about this movie!  First off, it's really grounded in the characters -- way more time is spent developing the characters than blowing stuff up, which is such a welcome change compared to so many action movies these days.  Also, it starts out with a really unlikable dude and gets me to root for him even before he has an epiphany and starts becoming likable.  I mean, let's face it -- at the beginning of this movie, Tony Stark (Robert Downey, Jr.) is not the super cool "billionaire-genius-playboy-philanthropist."  He's a bored billionaire playboy with genius he's not using who is more interested in enjoying himself than in anything else -- he even stands up his so-called friend Col. James "Rhodey" Rhodes (Terrence Howard) twice in twenty-four hours because he's too busy pursuing his own pleasure.  I have to say, the first time I saw this, I was going, "Oh, yeah!  THAT is why I don't like RDJ.  He plays jerks!"  But I stuck with it, remembering that in Avengers Tony Stark was actually very sweet in his own manic-abrasive way.  I'm so glad I did.

Because, of course, Tony Stark is a jerk at the beginning of the movie.  But then he gets captured by terrorists and imprisoned in a cave, and he figures out a way to escape using only his genius at building nifty stuff.  And I am just a complete sucker for prison-escape stories.  Everything from The Count of Monte Cristo to The Great Escape to Horatio Hornblower:  The Duchess and the Devil... yeah, I'm so there.  Give me a person in a prison figuring out how to get out of it, and I'm a happy Hamlette.  Also, people using whatever they can get their hands on to create something -- I'm all about that!  That's what made me love the first season of Lost so much, the ingenuity and creativity that the characters used to make life work on a deserted island. 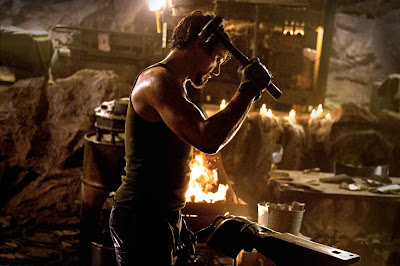 But I digress.  Also, um, I should issue a SPOILER ALERT here because I'm totally going to be discussing plot details from here on out, and if you haven't seen this yet and have any desire to, just go get a copy and watch it, okay?

So.  In captivity, Tony meets this dude named Yinsen (Shaun Toub) who is genuinely a nice guy.  No real idea why he's also been captured, but he's the one who gives Tony a way to save both his physical heart (namely, that electromagnet in his chest) from shrapnel, as well as his emotional/spiritual heart (namely, unconditional friendship) from the oblivion Tony has thrust it into.  He also helps Tony build an iron suit to escape in. 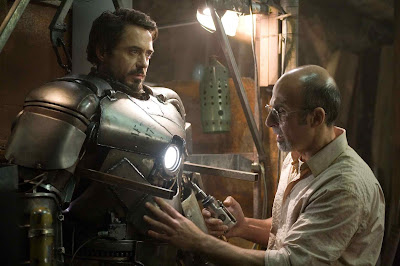 And, when Yinsen lays down his life for his friend, he charges Tony with earning his new lease on life.  And, once he's escaped and been rescued, Tony sets out to do just that.  He's had his epiphany (I love epiphanies!) and he's ready to transform himself from a pointless playboy who profits from creating the best weapons in the world into someone who matters, who believes in something, who others can believe in.  And, you guessed it, character reformation is another big sweet spot on Hamlette's list of favorite things.

The rest of the movie, of course, is about Tony building a better Iron Man suit, saving innocent people, visiting justice on those who've escaped it too long, and bringing down the nemesis he didn't know he had until about halfway through this movie.  Also, once he starts transforming into an actual person, he notices that his right-hand-woman, Pepper Potts (Gwyneth Paltrow) is an actual person too, not a computer program like his JARVIS (Paul Bettany's wonderful voice) or a disposable date like all the other women he's been attracting. 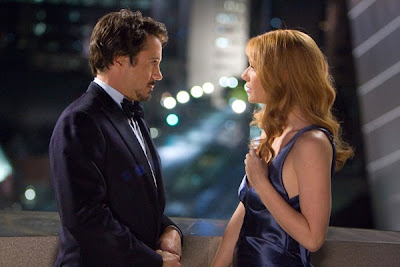 I have been a Gwyneth Paltrow fan since the first time I ever saw her in a movie, which was Emma (1996).  I've only seen her in a handful of things, but I always find her lovely, charming, and funny.  It's kind of rare to find a woman who can pull off beautiful and funny at the same time, but Gwyneth does it well.  Her Pepper Potts was one of my favorite characters in The Avengers, and I only wish she had been in it -- and the Iron Man movies -- more. 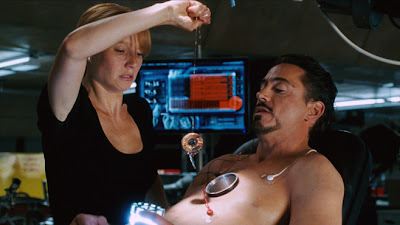 I think what I like best about Robert Downey Jr.'s portrayal of Tony Stark is how he has this nearly-hidden sadness in his eyes almost all the time.  Whether this is due to RDJ's own life experiences or just great acting, I don't know, but it really gets inside my emotions and makes me cheer him on.  And want to hug him, but I'll leave that to Pepper.

So.  Is this movie family friendly?  It could be with a filter thingie.  There's a brief scene of a woman on top of Tony as they paw each other while both of them are somewhat undressed, some innuendo-filled dialog, and violence.
Posted by Hamlette (Rachel) at 8:40 AM