So, I've decided I love too many "action/adventure" movies to lump them all together, and I'm going to do lists of my favorite superhero, sci-fi, fantasy, and war movies separately.  Which means these are all pure action movies about people without super powers or magical abilities that are battling other real people, not robots or supervillains or evil wizards.  Yes, such movies exist! 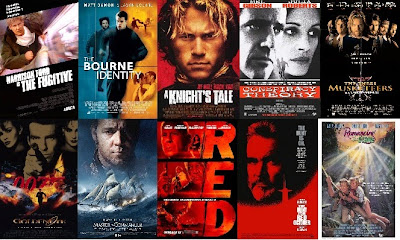 Dr. Richard Kimble (Harrison Ford) is wrongly convicted of his wife's murder, escapes, and goes hunting for the real killer while U.S. Marshal Sammy Gerard (Tommy Lee Jones) hunts for him.  My second-favorite movie of all time.

Amnesiac Jason Bourne (Matt Damon) races across Europe, evading unknown pursuers, seeking answers about his past, and falling in love with a quirky stranger (Franka Potente).  The movie that changed my mind about Matt Damon.  And based on one of my favorite books.

Poor William Thatcher (Heath Ledger) pretends to be a knight so he can win jousting tournaments and feed himself and his friends (Paul Bettany, Alan Tudyk, and Mark Addy).  Rollicking good fun, with a crazy soundtrack and some awesome jousting scenes.

Paranoid cab driver Jerry Fletcher (Mel Gibson) convinces the woman he loves (Julia Roberts) to help him uncover a conspiracy.  I think this is the first thing I ever saw Patrick Stewart in other than Star Trek:  The Next Generation.  It manages to be twisty and tender, creepy and sweet, all at the same time.

Young d'Artagnan (Chris O'Donnell) just wants to be a Musketeer, but he ends up embroiled in unmasking a plot against the king.  His three Musketeer friends (Kiefer Sutherland, Charlie Sheen, and Oliver Platt) are hilarious and awesome too.  I actually like this better than Alexandre Dumas' book!

James Bond (Pierce Brosnan) battles his ex-partner (Sean Bean) to save Britain from an electronic meltdown.  The first thing I ever saw Brosnan, Bean, and Judi Dench in -- and I became a total fan of all three.

Captain Jack Aubrey (Russell Crowe) leads his best friend Stephen Maturin (Paul Bettany) and his ship's crew on a quest to capture a dastardly French ship.  I'd read all of Patrick O'Brian's novels about Aubrey and Maturin before the movie came out, and I spent a lot of my time in the theater whispering to my brother about how perfectly everything matched the books.

Retired black-ops agent Frank Moses (Bruce Willis), his new girlfriend Sarah (Mary-Louise Parker), and a bunch of his old pals (Morgan Freeman, John Malkovich, Helen Mirren) and enemies (Brian Cox) team up to figure out who's trying to kill them, and why.  Hilarious from beginning to end.  You guys wanna get pancakes?

CIA analyst Jack Ryan (Alec Baldwin) tries to convince his superiors that a Russian submarine captain (Sean Connery) wants to defect.  Still the best Jack Ryan movie, and since I love Harrison Ford but only like Alec Baldwin, that's saying something.

Romance novelist Joan Wilder (Kathleen Turner) goes to South America to rescue her kidnapped sister and ends up having a grand adventure with the help of a stranger (Michael Douglas).  Rollicking good fun, and all the parts that have to do with being a writer crack me up to no end.
Posted by Hamlette (Rachel) at 12:08 PM