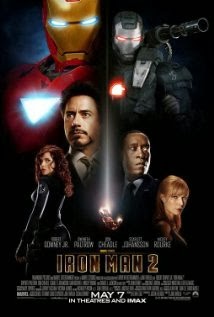 I'll say it right here at the beginning so you have no misconceptions:  I do like Iron Man 2.  It's very fun and has some amazing things that delight me.  However, I don't like it nearly as well as Iron Man or Iron Man 3.  And I think I've figured out why.  In fact, thanks to spending a whole bunch of time contemplating why I don't like this as well as the first one in particular, I've had another revelation:

I love stories where what's going on inside the characters and what's happening to them are related.

I'm going to compare Iron Man 2 and Iron Man here, because they're fresh in my head.  Will then expound on other movies.  At some point, yes, I will do a bit of reviewing Iron Man 2.  (There are spoilers ahead.  I'm not marking them individually.  They start pretty much now.  Just so you know.)

So, in this one, what is going on inside Tony Stark (Robert Downey, Jr.)?  He's freaking out because he's dying, and he has no idea what to do.  He's terrified, and he's refusing to confide in anyone other than JARVIS, and so he's doing all kinds of seemingly irrational things.  What's happening to him?  Some Russian dude named Ivan Vanko (Mickey Rourke) is bent on avenging his dad for getting cheated by Tony's dad.  He teams up with another dude named Justin Hammer (Sam Rockwell) who's trying to steal the Iron Man technology and sell it to the military.  Or something like that.  Anyway, my point is, neither of those has anything whatsoever to do with the fact that Tony is dying.  They try desperately to tie them together with the idea of what legacy you leave behind you, but that feels kind of tacked-on.

Now, what's going on inside Tony Stark in Iron Man?  He's scared by his near-death experience when he was kidnapped, elated by his new creation, and determined to bring his kidnappers to justice.  What's happening to him?  He gets kidnapped, he escapes, he finds out his supposed friend is behind it.  It's all tied together, what's going on inside him and what's happening to him.  I used to say movies like that are really well focused, but now I think I'll say they have a pleasing Singularity of Purpose.

I'll do two other movies to illustrate, and then say a bit more about Iron Man 2.

Another movie that, for years, I've been a bit dissatisfied with:  X-Men (2000).  What's going on inside Wolverine (Hugh Jackman)?  He's trying to accept that he's found people who accept him and falling in love with Jean Grey (Famke Janssen).  What's happening to Wolverine?  Well, one of his new friends does get kidnapped, but it has nothing to do with the fact that she's his friend.  It's all because Magneto's hatched a loony plan to rule the world and he needs Rogue's (Anna Paquin) powers to do it.  I have been known to watch what I call "the good parts version" of this movie, skipping what I call "the boring Magneto parts" because I love so much what's going on inside the characters (especially Wolvie), but the plot keeps getting in the way.


By contrast, X2:  X-Men United (2003) has Singularity of Purpose in spades.  What's going on inside Wolverine?  (Yes, let's just admit that he's the main character of those three movies.)  He's tracking down his past, trying to put the puzzle bits back together and figure out how he became who he is.  And what's happening to Wolverine?  His past is chasing him, in the form of William Stryker, who gave him his adamantium skeleton and claws.  It's all tied beautifully together in one giant chocolate truffle of magnificence.

Yeah, that last sentence made no sense, did it.  Oh well, you get what I'm saying.

What I'm saying is that Aristotle, with his Three Unities for drama, may have been onto something.  With the Unity of Action, anyway -- I don't mind so much if the Unity of Place and Unity of Time get bent.  But I want that focus, that Singularity of Purpose, that Unity of Action.  This, of course, is very useful to me as a writer, because I'm sure that Aristotle and I are not the only ones who feel this way.  From here on out, I'm going to make sure my stories are focused like laser beams.

Okay, so anyway... Iron Man 2 amuses me a lot, and has some wonderful character development.  Everything with Tony Stark in it is wonderful.  Much as I like Mickey Rourke (and he's amused me greatly for many years, ever since I first saw Sin City), his part of the movie really feels superfluous, and I can see myself fast-forwarding through them to get to the Good Parts.

And I don't really like what happens with Pepper Potts in this one.  To be very honest, it feels unrealistic.  Here is a woman who has managed Tony Stark's life for years, cleaned up his messes, taken out his garbage, fielded every curve ball he's tossed her way.  But then she becomes head of Stark Industries and falls apart?  What?  It makes no sense to me, and makes Pepper look weak and inept when the whole first movie was spent making her look strong and capable.  Pfui. 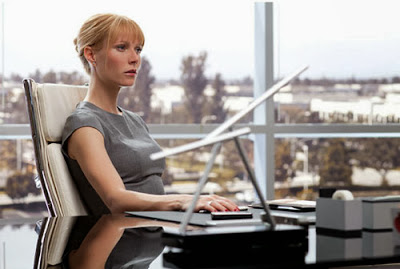 I've run out of things to say, suddenly.  OH!  Um, they replaced Terrence Howard with Don Cheadle.  That really, really bugged me the first time I watched this.  Now that I've also seen Cheadle as Rhodey in Iron Man 3, I'm used to him, but I still prefer Terrence Howard -- he had more gravitas, seemed more solid, like he really could just stand up to Tony Stark and call his bluffs.  Don Cheadle feels more weary, annoyed, and impatient.  Could just be me.

So, in sum, I wish this movie had more of this: 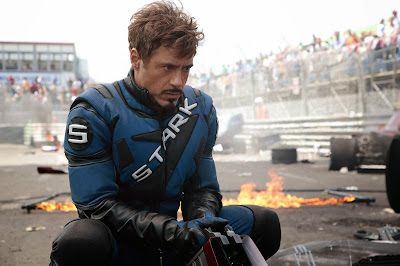 And less of this: 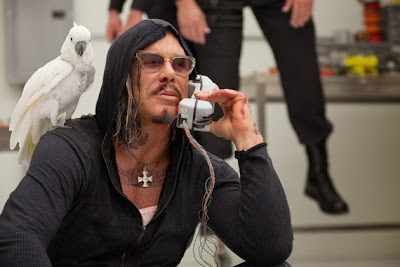 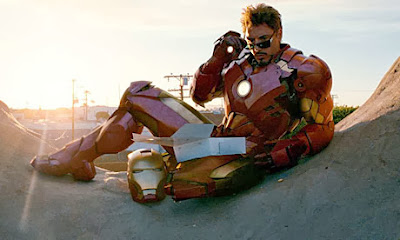