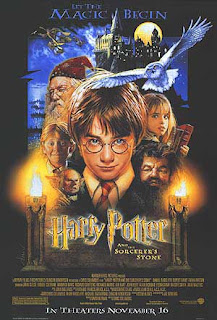 Cowboy finished reading the whole Harry Potter series recently, so we decided to start watching the movies together.  I saw all but the first two in the theaters, and I saw those exactly once on DVD years ago, so I'm glad to revisit them myself.  And I'm going to take this opportunity to do a review of each movie as we watch them.  What fun!

After we finished this first one, Cowboy said he thought it was "both too short and too long."  He felt like the explanation of the world and its characters could have been more organic ("more like Fellowship of the Ring" were his exact words), and he also thought that they worked too hard at making Snape seem sympathetic.

I disagree with him on the last point, but I kind of agree on the other two.  I feel like this was very much aimed at ten-year-olds, and so there are a lot of things that get a bit sillied-up, if you know what I mean.  The troll and its boogers, the letters flooding the Dursley house -- I know they're in the book, but they get emphasized to make kids laugh, I think.  Some scenes went on longer than necessary just because something was funny.  Not necessarily bad, just not necessarily great either.  Especially since it does start to feel like, "Now that you've met this person, you need to meet this other person because they'll be Important later on."

However, there's one thing about this movie that I do not think could be improved on:  the casting.

Richard Harris as Dumbledore.  So kindly, firm, charming, cheerful, solemn, wise, and a bit scary around the edges.

Alan Rickman as Severus Snape.  Unlike my husband, I felt like they were trying really hard to make us think Snape was evil, giving us shots of him sneering and scowling and looking very shifty.  Turning him into the red herring to end all red herrings, in other words.  However, Rickman as Snape is just delicious, all eaten up with old jealousy and remorse -- haunted, that's the word.  Haunted and angry.

And I love Maggie Smith as Professor McGonagall.  Snippy, sarcastic, abrupt, and caring.

It's very interesting watching this twelve years after it was made, not only knowing how everything turns out, but also how all the children age and mature.  They're all so little and cute here!  None of them are doing much acting to speak of yet, but you can see glimmers of what they'll do in a few years.

I have two favorite scenes in this movie, both of which are favorites of mine in the book too:  the Sorting and the boat ride to Hogwarts.  Both are such fun introductions to Hogwarts, us (and Harry) falling father and farther down this rabbit hole.  I think the boat scene is beautifully filmed, too.  I want to ride in one of those boats and see Hogwarts across the water, all twinkly and, yes, magical!

Overall, I like this movie, but I like the book better.  Part of that is because, compared to films of a similar era like The Lord of the Rings trilogy, the special effects lack.  The three-headed dog in particular just looks horribly fake.  But I really like the giant game of wizard's chess, that was well done, though it went on way too long.

One thing that struck me during this viewing is how much Harry's childhood was like being a house elf.  He's treated like a menial servant, he lives in a cupboard... very interesting.


Okay, I think that's all I have to say about this movie.  Time for supper!
Posted by Hamlette (Rachel) at 5:49 PM