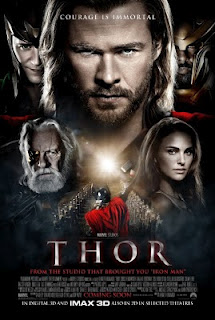 So, being on this huge Avengers kick right now, and not being able to go see it whenever I want to, I'm starting to watch the movies that led up to it.  I started with Thor (2011), which is totally out of order, but hey, it's me!  Obviously going to start with the stand-alone about my fave Avenger.

I spent the first section of it going, "Um, really?  I see."  It's much different than I was expecting, much more stylized and fantasy-based.  Which is not exactly bad, just not what I was expecting.  Once Thor hit Earth, I grooved on it much more, as I like Natalie Portman and I love fish-out-of-water stories.  Thor adjusts to modern life fairly quickly, and because he's a god, I'm okay with that.  (Not like in Kate & Leopold, where Leopold's adjusting so quickly annoys me and is the main reason I don't love a movie that stars three of my favorite actors.)  One of my favorite moments is when Thor's eating (and eating and eating, even though it's not shawarma) and tosses a coffee mug to the ground in appreciation of how tasty it is -- I love the culture clash right there, it made me laugh and laugh.

But anyway, after watching Thor, I had a blog post about it all planned out.  And then before I could write it, I had a revelation.  While sitting in the car in the grocery store parking lot, as a matter of fact.  And the revelation was that, although I was not fond of some of the FX, and there were parts that felt rushed, the movie as a whole appealed to me for one simple reason:  it's basically a retelling of Hamlet.

Okay, stop sniggering and rolling your eyes.  I know, I know, I'm a nut on the subject.  But let me list the similarities:

It's not perfect or complete, I grant you.  But there are a lot of plot similarities (and thematic ones too, which I may go into another time), and I'm wondering if they're what drew Kenneth Branagh to the project in the first place.  I have to say, thinking of Thor as a kind of retelling of Hamlet makes me like it a lot better, and now I really want to watch it again, to see if I can find other similarities.

EDIT:  I read an article that quoted Branagh as saying he thought of Thor as very similar to Henry V.  That works too.  Who am I to argue with Branagh?
Posted by Hamlette (Rachel) at 10:09 PM