I went to see The Avengers for a third time last week, this time with my mom.  I finally have a chance, a week later, to write up my thoughts on all the characters.  I titled this after the Avengers themselves, but I'll do another post later about the other characters too.  Like Loki, cuz he's obviously an important component to the film.  And Pepper Potts, and Agents Coulson and Hill.  And Nick Fury, cuz if I left him out, S.H.I.E.L.D. helicopters would probably descend in my backyard and vaporize it.  Which I wouldn't mind so much if Wolverine was aboard, so please make a note of that, any agents who might be reading this and checking my ISP coordinates or something.

Except this is The Avengers, not X-Men, which means I need to stop thinking fondly of Wolvie and instead start thinking about Thor.  :-)  Nice work, if you can get it!

So anyway, this is Thor, the god of thunder: 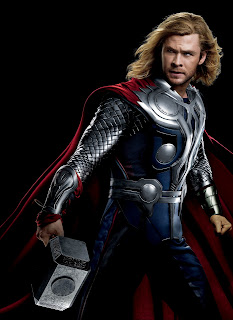 There are some pretty obvious reasons why he's my favorite Avenger:  broad shoulders, great hair, kinda quiet and a little broody, deep and grumbly voice.  I'm not necessarily head-over-heels for Thor, to be honest.  I think maybe I need to see his movie from last year to send me over the edge, but all the same, he's hands-down my favorite in this.  And I just spent fifteen minutes downloading pics of him so I could bring you the bestest ones here.  I love his quiet presence, the way he's all protective of us unruly earthlings, and did I mention Chris Hemsworth is both tasty and talented? 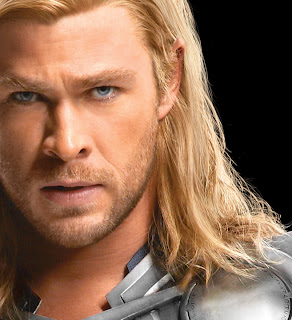 Okay, I'll stop drooling and move on to my second-favorite in this movie:  Bruce Banner/The Incredible Hulk. 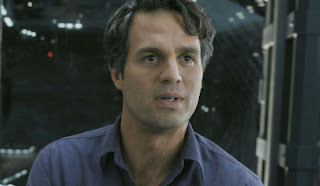 I loved Mark Ruffalo in this!  In fact, I consider his to be the strongest performance in the film.  He does these marvelous little twitchy things with his hands, like an alcoholic trying not to reach for a shot glass.  He hunches, he shuffles, he stutters and mumbles, he wears shabby clothes in dull colors -- all to try to blend in with the scenery and get ignored.  Every time he holds something small and breakable, like his spectacles, he looks like he's trying so very hard not to crush it.  I've never seen Ruffalo in anything before (an oversight I intend to remedy), so I don't know what his usual mannerisms are like, but I found him to be the best Dr. Banner I could ask for.  And a really fabulous Hulk too. 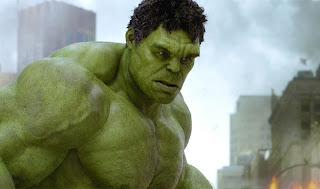 See?  Beautiful.  And very sad, which of course makes me love him and want to give him a hug.  Probably when he's not Hulked up, though, as a Hulk hug might be a bit dangerous. 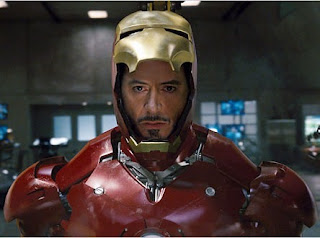 The reason this is a surprise is that I really disliked Robert Downey, Jr. until I saw this movie.  Not sure why, he just annoyed me.  A lot.  Maybe he will still annoy me in other things, but he uses precisely the perfect blend of poetry and meanness to pull off this role.  See?  Look how snarky he is: 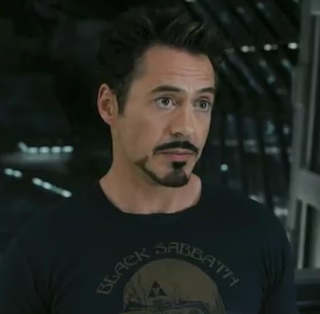 Also, Stark has the biggest character arc.  It's true that Thor goes from wanting to protect Loki from himself to being willing to take down Loki in order to save Earth.  And Bruce Banner goes from hiding from his inner Hulkiness to kind of embracing (or at least enjoying) it a teensy bit.  Cap'n Rogers is pretty much Grumpy the whole time, he just goes from Grumpy Loner to Grumpy Leader.  Barton doesn't change much by himself, and neither does Romanoff.  But Stark goes from being, as Cap puts it midway through the film, "not the guy who lays down on a wire to let the other guys crawl over him" to being willing to sacrifice himself not just for his newfound buddies, but for all those cowering strangers in Manhattan.

After those three, I kind of like the other three Avengers about equally.  Here they be: 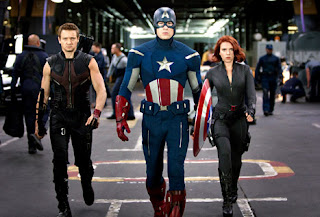 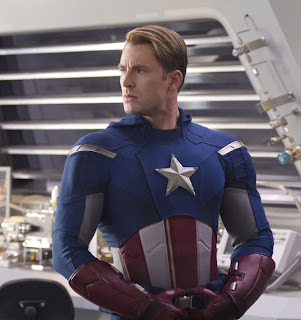 I have to say, Cap is a little too white bread in this.  He's got this tragic backstory, he's got the fish-out-of-water thing going on, and he kind of just doesn't get to go anywhere with that.  But he's sweet, upright, and all about Truth, Justice, and the American Way, which is pretty much how he is in the comics.  However, I think Chris Evans had more fun playing The Human Torch in the Fantastic Four movies, and I wish he'd been able to use a little of that playful spark here.  (Yes, I realize that makes very little sense:  I wish he was more broody, and also wish he was more playful.  I often make very little sense.)

Barton and Romanoff do a lot more with less material to work with.  In their meager scenes together, they manage to convey a huge amount of history just with looks and silences and quips.  Look at them: 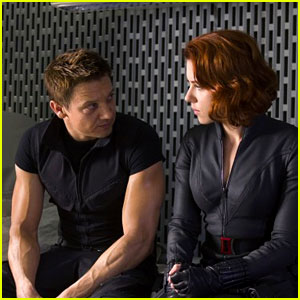 Even in a still like this, you can see gobs of affection, a comfortableness in each other's presence, a camaraderie that's missing between the rest of the team.  They're also the only two fully human members of the team who don't have any armor or super powers or anything else.  Just them, their assassination expertise, and their spiffy weapons versus the bad guy hordes.  Jeremy Renner and Scarlett Johansson rock in these roles, and I'd love to see a movie about their characters' history together.  Written by Joss Whedon, who understands the humans-caught-up-in-a-superhuman-battle thing oh so well.

Well, I think that about covers it.  At least, I've run out of steam and time, so tune in next time for Bad Guys and Minor Characters :-)
Posted by Hamlette (Rachel) at 4:05 PM