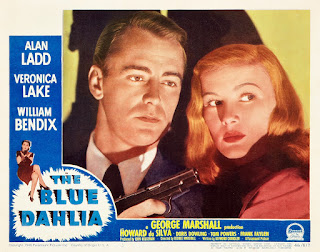 The Blue Dahlia (1946) tells the sad tale of three Navy bomber crewmen returning home from the war.  Marital infidelity, mental instability, and murder collide in typical noir fashion in this classic written by none other than Raymond Chandler, directed by George Marshall, and produced by John Houseman. 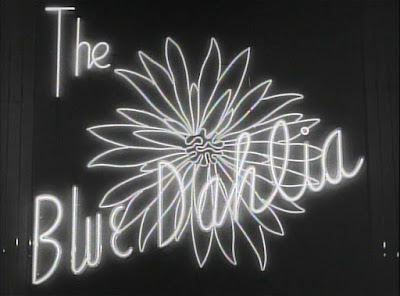 When Lt. Comdr. Johnny Morrison (Alan Ladd) returns from the war, he discovers that his wife Helen (Doris Dowling) is cheating on him with Eddie Harwood (Howard da Silva), who owns the Blue Dahlia nightclub and is involved in various shady goings-on. 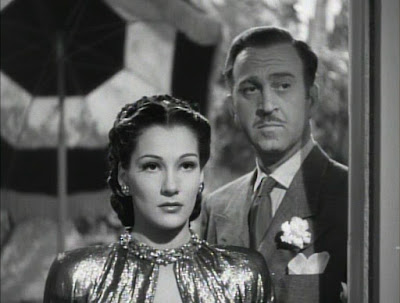 He punches Harwood and breaks up the party his wife was throwing at their bungalow. 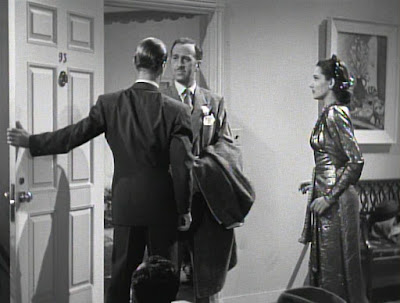 Meanwhile, Morrison's friends Buzz (William Bendix -- Ladd's real-life best buddy) and George (Hugh Beaumont -- yeah, Ward Cleaver from Leave it to Beaver) find an apartment together because Buzz needs looking after.  He has a metal plate in his head from getting wounded during the war, he has problems with short-term memory loss, he gets confused easily, and he can be very aggressive.  Loud music aggravates all those problems whenever he hears it. 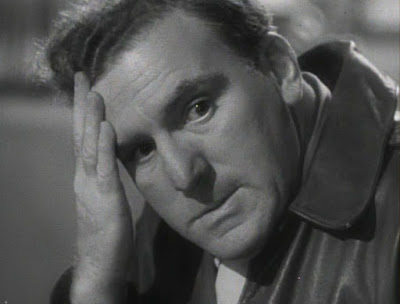 That first evening, Morrison confronts his wife about her cheating, her alcoholism, and her party-girl ways.  She insists on continuing to drink in front of him, which he tries time and again to stop.  But she likes alcohol and seems to be trying to provoke a fight over it.  She tries to hurt him by confessing their son's death was her fault, and Morrison roughs her up a bit. 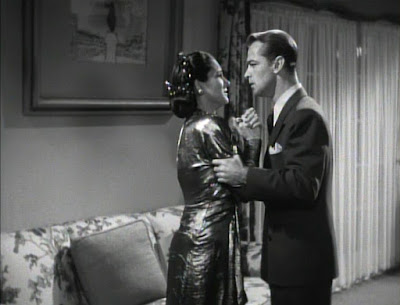 Right from the first, we've known their marriage was unhappy from the way Morrison grimaced when his pals told him he was lucky to be coming home to a wife.  There's some suggestion that he had been physically abusive before.  Because this is noir, I can accept a hero with dirty hands, but nothing Morrison does in later scenes with another woman suggests that he is a habitual woman-beater.  I, for one, don't get the sense that he's going to go on and abuse the next woman in his life -- he's not at all like Bud White (Russell Crowe) in L.A. Confidential, whom I love but also worry about and fear.  Maybe this is because Alan Ladd is my shining star right now -- that's certainly possible.  But I'm sure that if he wanted to play Morrison as thoroughly volatile and abusive, he could.  He gives off an impatient, violent vibe at the beginning, but the absence of it later makes all the stuff earlier feel like it's just meant to make the audience doubt whether or not Morrison kills his wife. 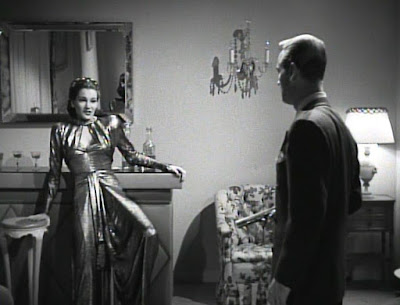 Because the wife dies.  Shot with Morrison's gun, which we saw him drop on the chair before he walked out on her.  Dude, don't leave guns lying around, especially in the same room as a drunken and desperate woman. 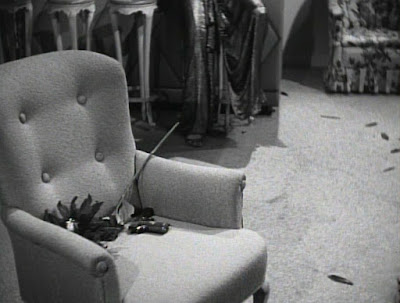 He walks off into the rain and meets up with Joyce (Veronica Lake), who turns out to be married to Eddie Harwood, the guy who's been cuckolding Morrison.  Unhappily married, as she's basically a girl scout and doesn't like the way he earns his money or treats people.  Or the fact that he's running around on her, of course.  She's on fairly friendly terms with him for all that, though.  It's kind of odd that a straight-shooting, nice girl like her married him in the first place, but he says at one point that he married her before she could find out what he was, so that somewhat explains it. 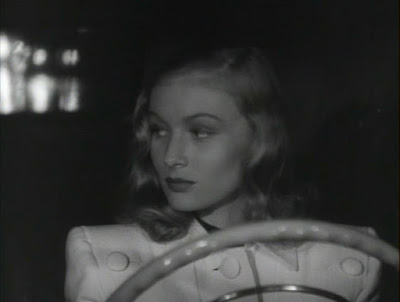 Anyway, the police want to question Morrison about his wife's murder, but he assumes they'll pin it on him, so he runs from the police while trying to figure out who did kill her.  And that's what makes up the bulk of the film. 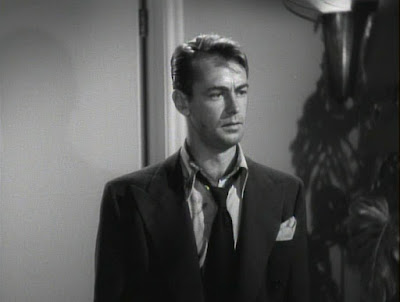 The first time I watched The Blue Dahlia, I was confused by the ending.  Well, not exactly confused -- exasperated, maybe.  While I love mysteries, both in books and on film, I don't like mysteries where all the clues turn out to be bright red herrings.  The kind where, when they reveal the culprit, you can't look back and say, "Oh, of course!  It had to be that person."  Agatha Christie does that too often, which is why I'm not a fan of a lot of her stories.  Raymond Chandler doesn't do that.  And when the ending of Dahlia felt that way to me, I got grumpy.

You see, Raymond Chandler is my absolute favorite author (I've written about him several times on my book blog), and this is the only film he wrote an original screenplay for, so I've been pretty jazzed up to see it for a long time.  And when I finally did, it was after falling head-over-heels for Alan Ladd earlier this year, giving me two reasons to be excited to see this particular noir classic.  So my disappointment was confusing, and my confusion was disappointing, if that makes sense.

However, I went ahead and watched Dahlia a second time, because I sort of hoped maybe it wasn't so bad after all.  And guess what?  It wasn't!

The second time through, knowing who the killer is, everything did make a lot more sense.  Not complete sense, and a lot of stuff still smells of red herring, but it does work, at least.  However, I learned recently that all this annoyance is actually not entirely Raymond Chandler's fault!

I learned from The World of Raymond Chandler -- In His Own Words (edited by Barry Day) that the US Navy didn't like the way the screenplay originally ended.  In a letter Chandler wrote to James Sandoe in 1946, he said, "What the Navy Department did to the story was a little thing like making me change the murderer and hence make a routine whodunit out of a fairly original idea.  What I wrote was the story of a man who killed (executed would be a better word) his pal's wife under the stress of a great and legitimate anger, then blanked out and forgot all about it; then with perfect honesty did his best to help the pal get out of a jam, then found himself in a set of circumstances which brought about partial recall" (p. 145).  But the Navy objected to having an injured serviceman be the killer, so Chandler had to change it.  (See pages 140-145 of The World of Raymond Chandler for the full story.)

The whole film sets up Buzz (William Bendix) as the killer, and when at the last moment it turns out he's innocent, the story deflates for me.  But that's a fairly minor quibble, in the end (even though I've spent all this time discussing it), because the acting, dialog, and cinematography are very enjoyable.  And now that I know that Raymond Chandler wasn't really responsible for that irksome plot twist, I'm happier.

The acting ranges from good to excellent to acceptable, which is about what I hope for in a movie, really.  Alan Ladd and Howard da Silva are good, William Bendix is excellent, and Veronica Lake is acceptable.  I like her character and her acting a lot better in This Gun for Hire (1942), but she's fine here.

The camera work is nice.  Nothing hugely showy -- you won't suspect it's directed by Otto Preminger, by any means, but it's solid.  The parts shot in the rain have the most atmosphere, and some of them are beautiful, like these: 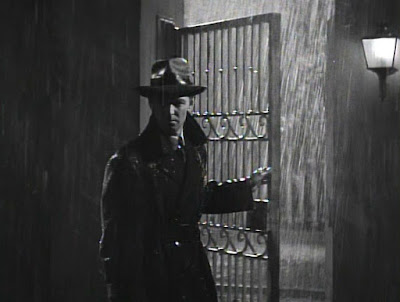 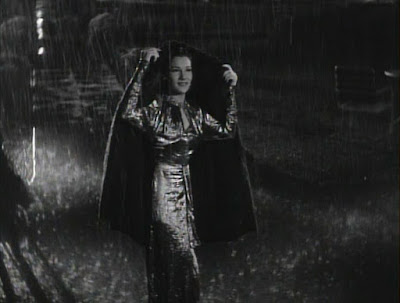 And, as you'd hope would be the case with a screenplay by Raymond Chandler, much of the dialog is fantastic.  A few of my favorite lines:

"It seems I've lost my manners.  Or would anyone here know the difference?" (Morrison to his wife's party-happy friends)

"Well, you could get wetter if you lay down in the gutter."  (Joyce to Morrison when she offers him a ride in the rain)

"Every guy's seen you before... somewhere.  Trick is to find you."  (Morrison to Joyce)

"Maybe you'd like it better if I minded my own business."
"Think you could?"
"I could try."  (Joyce and Morrison and Joyce again, with the sort of caustic flirting Ladd excelled at acting and Chandler excelled at writing)

"It's a terrible thing for the hotel."
"Kinda tough on the Morrison dame, too."  (Hotel detective and policeman discussing the murder)

"I seem to have misplaced your name at the moment."
"Where were you keeping it?"  (Hotel detective and Buzz)

So is this movie family friendly?  As film noir goes, it's fairly tame.  Lots of alcohol use, and the issue of marital infidelity is key, but the violence is actually fairly minimal. 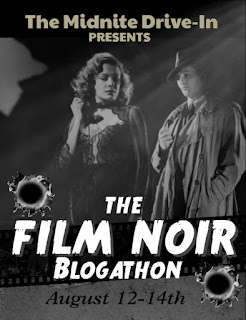 This review is my first entry into the Film Noir Blogathon hosted by The Midnite Drive-In.  Please check out that blog for links to all the great blogathon entries over the next few days.  I'll be reviewing The Glass Key (1942) for this event as well, so stay tuned for more noir Alan Ladd :-9
Posted by Hamlette (Rachel) at 8:25 AM