On My Way Home

I'll have lots more photos and info to share later this week, too, but for right now, time to tell you where I've been all weekend.  Does this give you any ideas: 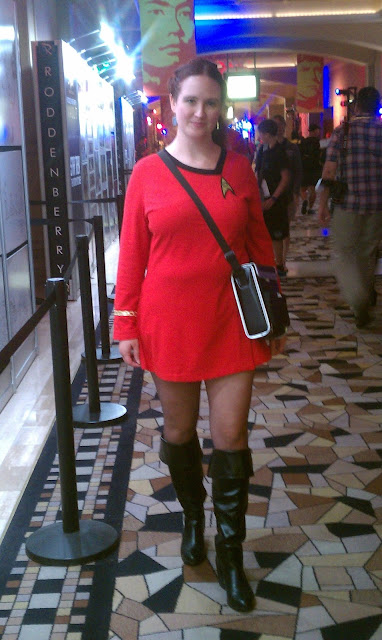 Yes, I've been in Las Vegas at the official 50th Anniversary Star Trek convention with my bestest of best friends and her sister.  We had an amazing time hanging out with each other and thousands upon thousands of other Trekkies/Trekkers.  We dressed in costume for two of the days, got to attend panels of various Trek stars and so on, had our pictures taken with William Shatner and Jonathan Frakes, and were generally as happy and relaxed and excited as it's probably possible to be all at the same time.

Now I'm sitting at the airport catching up on email and blog comments and waiting for my flight.  As you can see, I've got some good company: 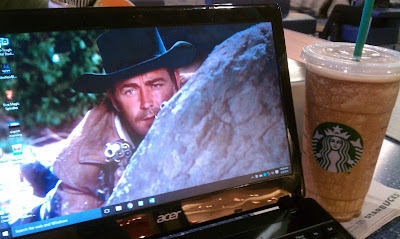 I promise to write up a loooooong post (or series of posts) about the convention, but right now I'm trying to sort of ease myself back into the idea of returning to real life.  Cowboy and our three kittens will be waiting at the other side of a five-hour plane ride to claim me, and I'm very much looking forward to that, but probably not as much as the kids are.  This is the first time I've been away from Sam and Sarah for more than a single over-night, and I've never been away from Tootie for more than six or eight hours.  It was harder on me to leave than it was on them, but it was harder on them for me to be gone than it was on me.  And probably hardest on Cowboy, who is usually the one going off for days on end on business trips.

Anyway, time to try to finish up one of my movie reviews for the blogathons this weekend, then go find my gate.  Maybe grab some lunch or something.  Beam me up, Scotty!  Party's got to end sometime.
Posted by Hamlette (Rachel) at 2:40 PM