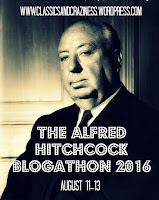 Eva's Alfred Hitchcock Blogathon has begun!  This is my contribution to the event, the list of my favorite Hitch films.  Are any of these your favorites?  Does your taste coincide with me, or differ wildly?  I'd love to hear which of his films you love best! 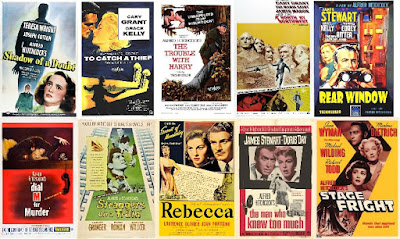 1.  Shadow of a Doubt (1943)  A young woman (Teresa Wright) who idolizes her uncle (Joseph Cotten) slowly comes to suspect that he's not the nice, kindly man she thought, but actually a serial killer.  Yes, I love this one especially much for Joseph Cotten, as he's a pet of mine and this is one of his best performances.

2.  To Catch a Thief (1955)  French authorities ask a reformed cat burglar (Cary Grant) to help them catch another jewel thief, using the glittering assets of a lovely socialite (Grace Kelly) as bait.  This is just one gorgeous costume after another, with snazzy dialog to match.

3.  The Trouble with Harry (1955)  Harry is dead, and various people try to figure out what to do with his body.  It's kind of a screwball black comedy, if you can imagine that combination.  Daffy and delightful.

4.  North by Northwest (1959)  A normal guy (Cary Grant) gets mistaken for a spy by an Evil Bad Guy (James Mason) and goes on the run with a lovely blonde (Eva Marie Saint), who I'm sure had a connection to the plot somehow, but I can never remember what it is.  It doesn't matter, cuz this one is great fun even so.

5.  Rear Window (1954)  Wheelchair-bound photographer (James Stewart) and his girlfriend (Grace Kelly) spy on their neighbors and suspect one of them has committed murder.  But how to prove it?  Voyeuristic filmmaking at its best, it reminds us that we're just peeking at movie characters through a window too.

6.  Dial 'M' for Murder (1954)  A rich tennis champ (Ray Milland) wants his wife (Grace Kelly) to die, and each time his plan goes awry, he concocts a new one.  The real mystery for me is why she ever married him the first place, but whatever, it's tense and thrilling.

7.  Strangers on a Train (1951)  Two strangers (Farley Granger and Robert Walker) meet on a train (you could've guessed that much from the title, right?) and casually discuss the idea of killing off each others' annoying relations.  Only then one of them actually does it.  This one always gets me on the edge of my seat even though I don't particularly like any of the characters.

8.  Rebecca (1940)  A young lady (Joan Fontaine) marries a rich, older widower (Laurence Olivier) and finds herself tormented by the idea of his first wife.  Secrets and obsession at their darkest.

10. Stage Fright (1950)  A young actress (Jane Wyman) tries to prove that her friend (Richard Todd) is innocent of killing the husband of his mistress (Marlene Dietrich).  And then she starts to wonder if he's innocent after all.  This is another one I mostly love for the cast, as I have a soft spot for Richard Todd.  It's got a great plot and everything, I just mostly like it for him.


Don't forget to visit Coffee, Classics, and Craziness for all the Hitchock-themed fun over the next few days!
Posted by Hamlette (Rachel) at 2:25 PM