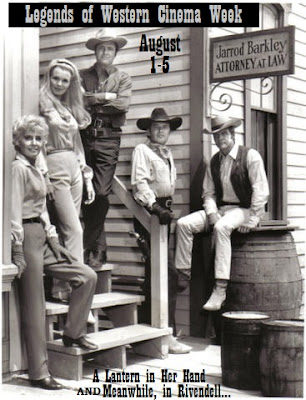 To continue celebrating Legends of Western Cinema Week, here is a list of my top ten favorite western TV shows.  I own at least one season's-worth of eps of each on DVD, and can't recommend them highly enough. 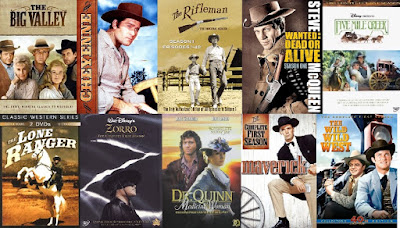 1. The Big Valley (1965-69) follows the adventures of the rich, influential Barkley family:  wise matriarch Victoria (Miss Barbara Stanwyck), sensible lawyer Jarrod (Richard Long), hot-tempered charmer Nick (Peter Breck), sensitive tough guy Heath (Lee Majors), and bold sister Audra (Linda Evans).  Together or apart, they're always encountering excitement of one sort or another in and around the big California valley they own.  (That's them in the button at the top of the page.)

2. Cheyenne (1955-63) focuses on nomadic loner Cheyenne Bodie (Clint Walker), who travels the west helping people, taking odd jobs, and doing the right thing wherever he can.  Kind of like the Lone Ranger, but generally without a sidekick, and always without a mask.

3. The Rifleman (1958-63) tells the story of widowed rancher Lucas McCain (Chuck Connors) and his son Mark (Johnny Crawford), and all the bad guys who seem drawn to the tiny Texas town of North Fork, where Marshal Micah Torrence (Paul Fix) is forever needing Lucas and his famous, specially modified Winchester to help stave them off.

4. Wanted: Dead or Alive (1958-61) is about bounty hunter Josh Randall (Steve McQueen) and his quest to earn money by capturing bad guys and delivering them to the authorities, with many moral dilemmas mixed in.  This may actually be the strongest western show of all -- it has very few "so-so" episodes, and manymanymany magnificent ones.

5. Five Mile Creek (1983-85) delves into the daily lives of a band of strangers working together to run a small stage coach line and its way station in the Australia frontier.  Through a variety of adversities and problems, they forge a "found family" that I have wanted to belong to for as long as I can remember.

6. The Lone Ranger (1949-57) is about John Reid (Clayton Moore), the only survivor of an ambushed party of Texas Rangers.  After the lonesome Indian Tonto (Jay Silverheels) nurses him back to health, the two embark on a crusade to bring justice, law, and order to the West.

9. Maverick (1957-62) technically is about the three Maverick brothers:  Bret (James Garner), Bart (Jack Kelly), and Beau (Roger Moore), but Beau's only in sixteen episodes, so mostly it's about Bret and Bart.  They're all gamblers who drift around the west, preferring to use their sly intelligence and vast network of friends to solve problems, rather than fists or guns.

10. The Wild Wild West (1965-69) is basically James Bond in the Old West.  Secret Service agents James West (Robert Conrad) and Artemus Gordon (Ross Martin) foil anarchists, assassins, thieves, vandals, murderers, kidnappers, and any other fantastical bad guys the writers could dream up.  They have a special train car filled with gadgets and gizmos, and Artie is always dreaming up some wonderful disguise or other to get information or rescue Jim.  The later seasons are quite violent, and eventually the series was cancelled as a result, but the early seasons are funny and delightful.


And now you're going to ask me how come Bonanza and Gunsmoke, surely the most famousest western TV shows ever, are not on my list.  And the answer is that I like them just fine, but they're not my favorites, that's all.

Don't forget to check out Meanwhile, in Rivendell... and A Lantern in Her Hand for more fun all this week, and for links to others who are participating.  And don't forget to enter my giveaway, either!  Four of the shows I'm giving away are on this list!
Posted by Hamlette (Rachel) at 6:25 AM