On to Saturday!  Or, as I called it in my head, ShatnerDay. 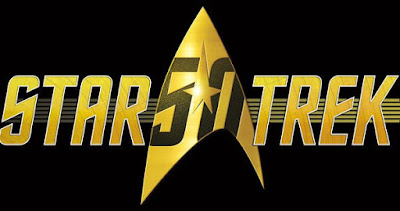 DKoren, L, and I ate a quick breakfast in our room, then started getting into costume, doing hair and make-up, and so on.


DKoren did my hair.  Originally, we had planned that I would wear it up on top of my head somehow, but I got so many compliments on it on Friday when we were just walking around, not even in costume, that we decided it should be down, but still fancy.  Here's what she came up with: 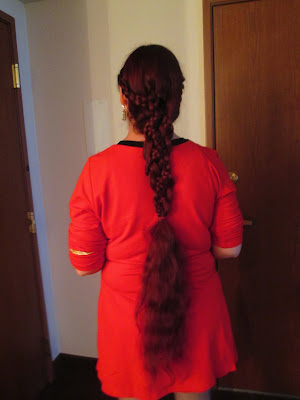 This is a worse picture, but shows you a bit better how she did it -- she made a braid on my left and right sides, above the temples, and one in the center of the back, and then braided them and the leftover hair together in one loose, complicated braid. 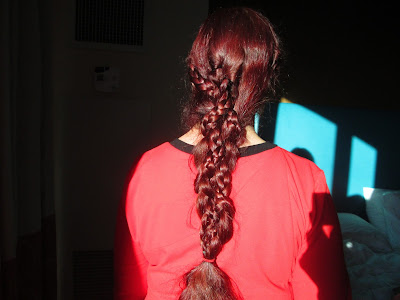 I loved that it kept my hair out of my face, but still looked sort of futuristic, while showing off that yes, I really do have that much hair.

And then, out we went into the world, dressed as Starfleet officers, complete with purses that looked like tricorders. 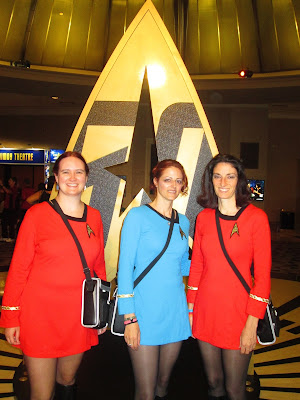 I'm not sure what it is about a costume, but being disguised in any way gives me a boost of bravado.  Did I mind walking amid thousands of strangers in the shortest skirt I had ever worn?  Nope!  (We did all have matching shorts underneath, and nylons.)  It was pure fun.  At least, until my feet started to protest -- I don't wear high heels pretty much ever (and neither to L and DKoren), so that was the one drawback to being in uniform, but really, it was a minor one in the end.  And, once again, I'm getting ahead of myself, because for the first few hours in costume, we were just sitting down anyway.  We went back to the venue I talked about in the earlier posts and saw three panels/interviews in a row.

First up were Star Trek:  The Next Generation's Michael Dorn (Worf), Marina Sirtis (Troi), and Jonathan Frakes (Riker).  They were highly amusing, especially when Sirtis got all annoyed that 90% of the questions from the audience were for Frakes, who spent much of the panel wandering the platform, talking to fans on the sidelines, and then playing with the little Trivial Pursuit game set up at the moderator's desk.  He asked the others a couple of questions from the game cards and was generally relaxed, cheerful, and hilarious.  Michael Dorn spent most of his time chuckling at the other two. 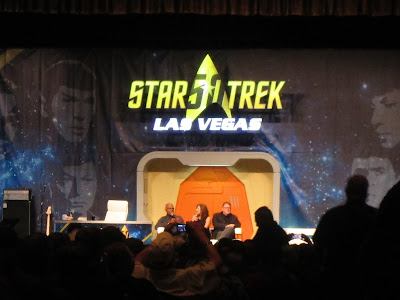 Here's a shot of a big screen so you can see them better. 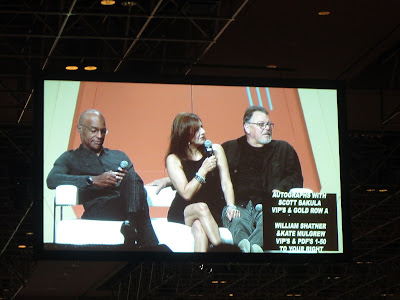 Next up was Walter Koenig, who played Ensign Chekov on the original series.  I was so pleased by how spry and intelligent and enthusiastic he was. 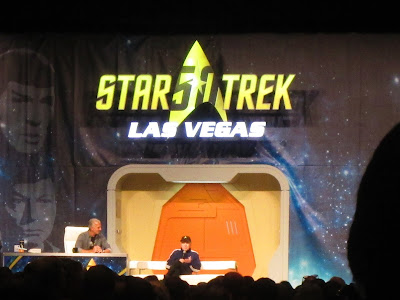 He sat down at first, but then got up after a few minutes and paced the stage most of the time.  He did some awesome impressions of other cast members, which were such fun. 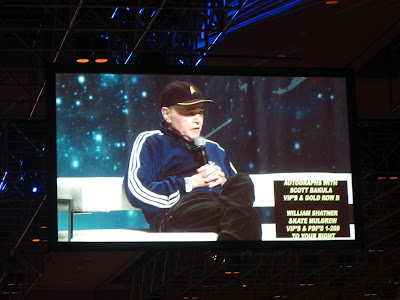 And then, it was William Shatner's turn.  (Do I have to tell you that he played Captain Kirk on the original series?  I hope I don't.  But I will, I guess, just for the very-very-very-non-Trek-oriented readers.) 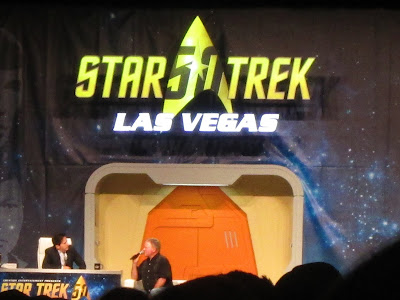 Now, I honestly did not go to this convention solely to see, hear, and meet William Shatner.  I didn't.  But him being there was a big deal for me.  You see, I fell in love with Star Trek as a young teen -- even before I fell in love with Combat!.  We're talking like 13 years old.  Very young, just beginning to figure out who I was and wanted to be.  And Captain Kirk was a HUGE part of my formative years.  Until I got to college, and C! edged it out, Star Trek was my favorite TV show, hands-down.  And Captain Kirk was my favorite character -- I didn't start out having a crush on him so much as just wanting to BE him.  I wanted to have that calm, that courage, that leadership ability, and yes, that power.  I wanted a captain's chair all my own. 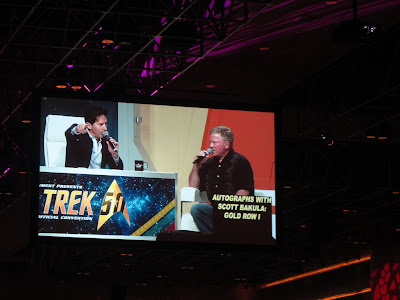 As I got older, I added a crush on the character to my hero-worship, but to this day, I would much rather be like Captain Kirk than be liked by Captain Kirk, if that makes sense. 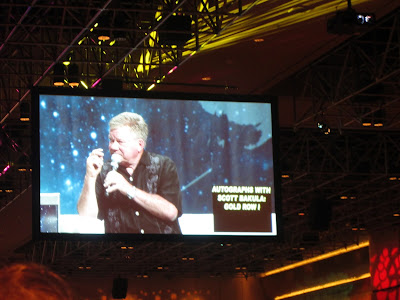 I've seen William Shatner in quite a few other things besides Star Trek, from a favorite episode of The Big Valley ("A Time to Kill") to Third Rock from the Sun to his turn as Professor Bhaer in the 1970s Little Women.  I find him utterly charming on-screen, I really do.  And in person, he was just as charming.  Funny, witty (not the same thing!), intelligent, kind, passionate... I was enthralled, as you can tell.  For more than an hour, he reminisced not only about Star Trek and the friendships he made while filming it, but about his horse-racing, recent TV projects, books he's working on, theoretical physics, and so much more.  He answered questions from fans graciously, sometimes even warmly, and I came away from that hour more firmly a fan of him than I had ever been before. 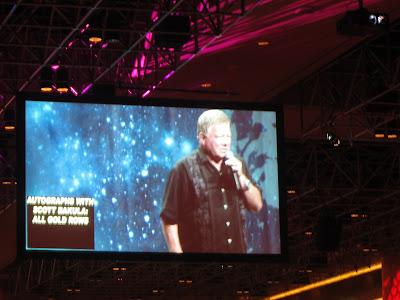 And then, of course, the icing on the cake -- we stood in line for almost 2 hours (in those boots!) and got our photos taken with him.  Which was a breathless experience, in a way -- I spent lots of time psyching myself up for the 30 seconds I'd be in his presence.  I spent months figuring out exactly what I would say, because I knew I'd have time to say one sentence, they'd snap the photo, and off I'd go.  Which is precisely how it went.

Mr. Shatner was sitting on a stool for his photos (he took hundreds of them that day, and he's in his mid-80s, so I'm really glad he could sit and be at least a little comfy) and, when it was my turn, I followed the attendants' instructions to stand next to him, and he turned a little and looked right in my eyes, and I smiled and said the sentence I had rehearsed for so long:  "Thank you for everything, Mr. Shatner."  He smiled back, we turned to the camera, they snapped the shot, and then he said, "Thank you."  I said, "No, thank you" as they moved me off, and it was DKoren and L's turn for their photo.

And that was it.  That was my few seconds meeting William Shatner.  And those were some pretty magical seconds, I have to say.  I actually spoke a whole sentence without sounding like a loony, I didn't trip and fall over, and he was as sweet and kind as could be, considering he only spoke two words to me.  He didn't really say anything to the person before me, and they didn't say anything either, so I feel like, hey, I'm really proud I said my one well-rehearsed sentence.  It was only six words, but they meant a great deal for me, and I hope he understood that what I really meant was, "Your character, Captain Kirk, helped me become who I am today, and your performances have brought me countless hours of joy and fun and learning.  My life is richer because of the way you did your job."  That's what "everything" meant, anyway.

So after that, we wandered all over the convention, getting our pictures taken in lots of different settings, really enjoying our costumes.


There were TONS of people in costume that day -- they'd held a costume contest on Saturday morning, so people still had all sorts of spiffy outfits on from that, but there were also just loads of people like us in plain old uniforms from all different series.  I feel like most of the uniforms were either from TOS or TNG, though I might be wrong on that.


Most of the people who weren't in a costume of some sort had at least some kind of Trek-related t-shirt on, and it was overall just so cool to see so many people proclaiming their love of Star Trek via their clothing.  Maybe I'm weird in thinking that was cool, but whatever, it pleased me.  There were a few people in costumes that we couldn't quite figure out how they were supposed to pertain to Trek (like the guy in a super-cool, super-authentic WWII ETO get-up.  Is there an ep somewhere that involves WWII?  We couldn't think of one), but mostly, it was all Trek, all the time.


We wound up at the room they'd decorated as Quark's Bar, where they had a replica of the original Captains' Chair set up in front of a backdrop that looked like the bridge.  A guy dressed as Harry Mudd obligingly took our photos and flirted in a Mudd-like way with us, which was highly amusing.  And I suddenly decided there was no way I could sit in that chair in a ladylike manner in that short skirt and those high boots.  So I declined to try it out, and let DKoren and L take turns in it instead. 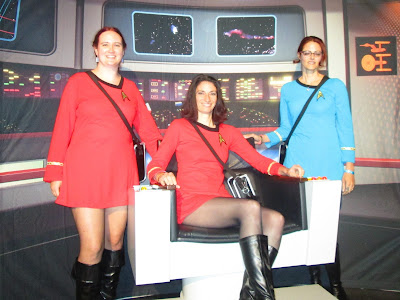 Then we decided that the guy cosplaying as Harry Mudd was so hilarious and perfect (I mean, he offered to find us lonely miners for husbands, but he said he'd have to pay us because we didn't need his Venus drug -- how funny and in-character and sweet is that?) that we stalked him until we could get our picture taken WITH him instead of just him taking our photos with our cameras/phones. 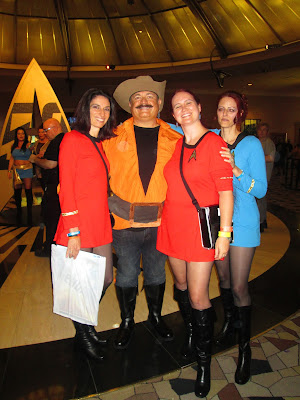 As you can see, he was most happy to oblige.

DKoren and I had to stay in our costumes until well into the evening so we could get our photos taken on the recreated set of the bridge, which we'd paid for.  We decided we had to do something wacky and fun instead of just smiling, because that would be boring and pedestrian.  And we refuse to be either of those things.  So we pretended the ship had just been hit and we were trying to stay at our posts: 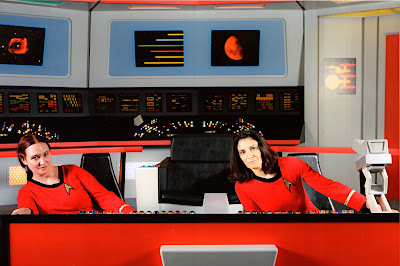 (Chekov has always been one of my favorite characters, so DKoren graciously let me sit at his post.)

And then our feet hurt too much to bear anymore, so we went back to our room and soaked our feet in the bathtub because they closed the pool area at 6pm at that hotel (so drunk people don't drown in it, I guess), so we couldn't soak in the hot tub. 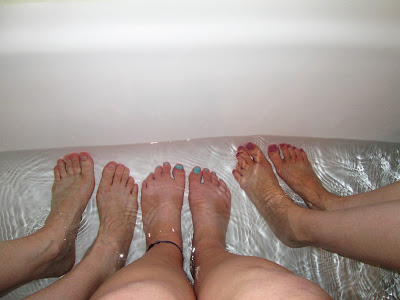 And we learned that if anyone ever tried to boil DKoren alive, she would survive, because she can withstand torturous water temperatures, and even claims they are "cool and pleasant."  So now we know what her superpower is.

We ended the day with jammies and Pushing Daisies again, because by then it was a ritual.  And I think this was the day I fell asleep in the middle of an episode, oops.  But they graciously rewatched it with me the next day so I wouldn't stay in suspense.
Posted by Hamlette (Rachel) at 4:28 PM