The premise of Hell on Frisco Bay has been done before, and often.  Policeman Steve Rollins (Alan Ladd) got sent to prison five years ago for a murder he didn't commit.  When he's released, he goes looking for the people who actually committed the crime and framed him for it.

What elevates Hell on Frisco Bay from being just another vengeance noir is the acting.  When you get Alan Ladd and Edward G. Robinson in a room together, two actors who honed their skills playing tougher-than-tough guys, you know you're in for a good show.  Ladd's the sort that can make you care about his character even if the script doesn't give him a lot to work with, and Robinson's the sort that can make you despise him just by staring at another character in a certain way.

Happily, the script by Sydney Boehm and Martin Rackin gives them both plenty of character development and good lines.  And Frank Tuttle's directing keeps everyone on task nicely.  I'm never bored during this film even though it doesn't trot out the thrills at a rat-a-tat pace.  It opts for a slow boil instead, which is fine by me.

You know I totally bought this movie for Alan Ladd, and he plays the central character, so I'll start with him.  Ladd's character undergoes a remarkable transformation over the course of this film.

When he first gets out of prison, he is angry, fearful, weary, and determined to keep away from anyone he cares about so they don't get hurt by the people he's going to investigate.  He wears a too-big trench coat buttoned and tied tightly.  We find out early on that his wife Marcia (Joanne Dru) sent a suit and coat for him so he would have something nice to wear on his way out of prison.  The coat is too big, as if she'd sent along something made to the measurements he'd had when he went to prison, and he's lost weight while on the inside.  Rollins refused to let his wife see him in prison, so it would make sense she wouldn't know what kind of shape he's in now.

Rollins wraps himself up so tightly in that coat, as if it's armor.  Everyone else is acting like it's summer, but he's got that coat closed up, hiding him.  He's been in prison a long time, and he's a former cop -- at one point, someone asks him a snide question about what it was like being in prison with guys he put there, and Rollins looks sick for a split second.  He did not have a good time in prison, you can bet on that.

I mentioned he looks weary.  He also looks old.

This is only four years after he filmed Shane, but Ladd starts this film looking a decade older than he did there.  The first time I watched this, I chalked this up to Ladd's declining health at the time.  But nope, I think this was actually a deliberate decision on the part of Ladd and the filmmakers.

As the story progresses, not only does he stop wrapping himself in that too-big trench coat, he begins to look healthier and younger.

By the end of the film, he's positively handsome again.  It's a remarkable transformation, and a subtle way to show that proving his innocence is helping Rollins heal from all he's been through.

Edward G. Robinson plays one of his meanest, dirtiest characters here, and if you know anything about the sorts of characters he played over the years, you know that's saying something.  Here, he's Vic Amato, a mafia boss bent on taking over the entire San Francisco waterfront.  Rollins is convinced Amato is behind that killing 5 years ago that Rollins got framed for, and he's willing to do just about anything to prove this.  The trouble is, Amato's willing to do asolutely anything to keep control over his territory.

And I do mean absolutely anything.  Amato is reptillian, cold and mean and merciless.  He has no compunctions about bribing cops, killing family members, or propositioning other people's fiancees.  And yet, just when you're ready to write him off as a cliched caricature of a bad guy, he does something surprising like ask someone a deep theological question because he's genuinely fascinated by why people would believe in God.

It's a gripping performance on every level.  You wouldn't think anything could get me to take my eyes off Alan Ladd, but in the main scene the two share, I have a hard time deciding who to watch the closest!

I've mostly seen Joanne Dru in westerns, so it was nifty to see her in something more modern.  She plays Marcia Rollins quietly, filled with regret, yet she's never mousy.  Marcia briefly became involved with another man while her husband was in prison, either physicially or just emotionally -- the film doesn't specify.  She's convinced that the reason her husband gives her the cold shoulder when he's free is entirely because of this.

Rollins doesn't disabuse her of this, and does seem genuinely upset by it.  But it's also true that he refuses to move in with her again because he knows Amato would use her against him, and he doesn't want to put Marcia in danger.  So he makes sure everybody knows he wants nothing to do with her.  Dru nails this role of a bewildered, lonely, angry, and uncertain woman.

Plus, she's absolutely beautiful in this film.  It's no surprise that Rollins can't stay away from Marcia, despite his best intentions.  Sure, he's still upset that she got involved for a short time with someone else.  She's still upset because he wouldn't let her see him in prison.  He insists he wants her to find a new life without him.

And yet, he keeps showing up at the nightclub where she sings.  When she's not looking at him, he gets these wistful, yearning expressions.

You know he still loves her, he just... can't be with her for so many reasons until he's cleared his name, taken Amato down, and thus made sure it will be safe for her to be with him again.

The real surprise here was Paul Stewart as Amato's gunman Joe Lye.  He's easily one of the most sympathetic bad guys I've seen in recent memory.  He spent some time in prison himself, on death row, but Amato got him freed somehow.

Amato holds this over Lye's head -- he's at his absolute meanest when he's tormenting Lye over the fact that he converted to Christianity in prison, that he has a nice woman (Fay Wray) for a girlfriend now, and the fact that when he's nervous, he starts to stutter and gets a facial tic.

I spent basically this whole movie wanting to rescue Joe Lye.  He's stuck in a hopeless situation, killing people on Amato's orders so Amato won't send him back to death row.

And when Lye finally thinks he has a way to stop Amato's persecution, you know it's doomed to fail.  I've never paid a lot of attention to Paul Stewart before, though I know I've seen him in several movies, but I'm going to change that from now on, for sure.

There are a lot of familiar faces in this.  I've seen William Demarest, Peter Hansen, and Anthony Caruso, and George J. Lewis in lots of things, including other Alan Ladd movies.  I can never see George J. Lewis in a movie without thinking of Disney's Zorro -- he's so memorable as Don Alejandro in that!

I was especially interested to see Perry Lopez playing an antagonist, for I know him best as the sweet, young cowhand Pete Ramirez in The Lone Ranger (1956).

It was also really neat to see Stanley Adams in a small role -- he played Cyrano Jones in the classic Star Trek episode "The Trouble with Tribbles," which I've seen countless times.

And a lot of people know this movie just because it's got a young Rod Taylor in it -- he's only got a small role, but he's memorable, that's for sure.  He smashes a beer bottle at one point and makes me think of a young Alan Ladd in The Glass Key (1942).

Overall, this is a solid late film noir with some excellent acting.  The cinematography is nothing extremely awesome, but there are loads of great scenes shot on location in San Francisco, which definitely add a lot to it.  It's also one of those rare later noir films where not absolutely every single good guy dies, and in which the bad guys really do get what they deserve.  I love that about it. 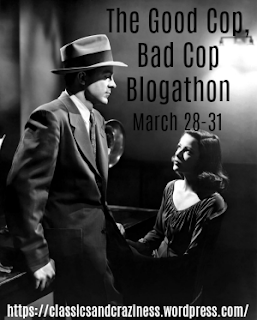 This is my entry into the Good Cop, Bad Cop Blogathon.  Check out the list of participants here for more great movie reviews!

EDIT: I forgot to say if this is family friendly or not.  It is one of the family friendliest noir films I've ever seen.  No bad language, the violence is not icky, the mention of the wife's unfaithfulness is very veiled, and even Amato's attempt to seduce his lackey's girlfriend is subdued and unsuccessful.  Fine for tweens and up, I'd say.  Younger kids probably wouldn't care much about it anyway.
Posted by Hamlette (Rachel) at 10:49 AM