Day 29 - Favorite film from your childhood

This is hard to answer, because my favorite film when I was a kid is still my favorite film, and so I'll blog about it next time.  So what should I blog about today?  A movie I loved as a kid that I don't care so much for now?  Except I can't really think of any of those either.  I tend to befriend movie characters and then always enjoy their company. 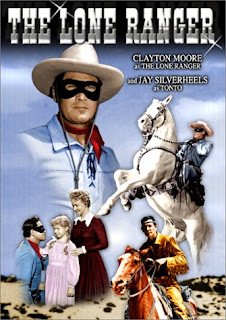 Well, here's a movie we watched all the time as kids:  The Lone Ranger (1956).  We got it from the library as often as our folks would let us, so often that I still have most of the dialog memorized.  And any actor who was in that movie, I generally think of by their character's name, not their own.  I think of Lyle Bettger as 'Killgore,' I think of Perry Lopez as 'Pete Ramirez,' and I absolutely can never remember Robert Wilke's name because to me, he is always 'Cassidy.'  The only character actor that escapes this issue is Michael Ansara, mostly because he's just so doggone awesome in everything, not just this.  But I've been known to refer to myself by his character's name, 'Angry Horse,' because it's a completely great name.

Anyway, I talked about the Lone Ranger TV show here, so I won't say much more now.

And yeah, I know they're supposed to make a new movie version, with Johnny Depp as Tonto.  I'm reserving judgment for now.  I love me some Johnny Depp, but this is a big part of my childhood, so if they screw it up... I shudder to think. 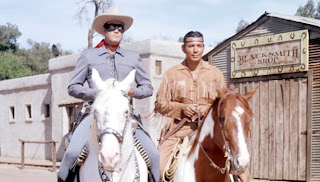