A word of warning: I just got back from seeing the encore presentation of Hamlet starring Benedict Cumberbatch and Ciarán Hinds at a movie theater with a friend, and it's 11:14pm.  I am, as usual following me imbibing in Hamlet, a little... widgety.  Weird and fidgety at the same time.  Drunk on immortal prose, basically.  It happens.  I marinate myself in Shakespeare for 3 hours and then I can't help but view the world in a different way for a while. 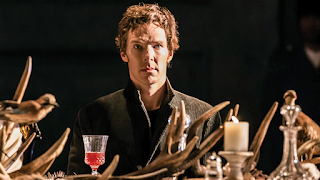 On the drive home, I was listening to this mix-CD I made myself back before I had kids in the car with me all the time.  One of the songs on it is "Hurt," the Johnny Cash version.  And as I was tooling along on the interstate in the dark, fueled with Hamlet's words and half a bag of chocolate-covered pretzels, it occured to me that wow, the lyrics of that song really speak to what's going on in this play.

And, because there is no way in Denmark I'm going to sleep for another 45 minutes or so, I'm going to attempt to share those thoughts with you in this post.  I haven't done poetry analyzation for a long, long time, but I'm pretty sure I still know how.

I hurt myself today
To see if I still feel.

Hamlet at the beginning of the play feels numb, so hurt by his father's death and his mother's hasty remarriage to his uncle that he's disconnected from those around him.  The man who meditates on self-destruction so poignantly is definitely a person who might hurt himself just to be sure he's still even alive.

I focus on the pain,
The only thing that's real.

Hamlet focuses on his own pain to an unhealthy degree, obsessing about his grief and anger despite the efforts of family and friends to pull him out of his funk.

The needle tears a hole --
The old familiar sting.

Okay, obviously Hamlet isn't a drug addict.  But he likes the familiar sting of self-reproach.  He's always yelling at himself for not doing the things he thinks he should be doing.

Try to kill it all away,

To be or not to be, that is the question.  Whether or not Hamlet can just rid himself of all the pain and angst by just killing himself.

But I remember everything.

Hamlet is obsessed with the fact that everyone else seems to have forgotten his father.  HE remembers everything.

What have I become,

Hamlet tries to figure out who he is now.  Son of a father murdered and a mother stained, nephew of a murderer.  What has he become?

We, the audience, get to hear Hamlet unpack his heart with words.  In a way, we're his friend, the one who listens and tries to understand.

Everyone I know
Goes away in the end.

Hamlet has abandonment issues.  His father left him by dying, his mother left him by marrying his uncle, his girlfriend broke up with him, and even his friend Laertes left him by going back to school, which Hamlet was forbidden to do himself.

And you could have it all:
My empire of dirt.

Hamlet calls mankind "a quintessence of dust."  He calls Denmark "a prison."  He doesn't want to be there, he doesn't want any part of those people or that rotten place he's trapped in.  He'd gladly be rid of the whole problem if he could.

I will let you down.
I will make you hurt.

Hamlet hurts absolutely everyone around him.  He rants at his mother, pokes fun at Rosencrantz and Guildenstern and Polonius to their faces, berates and derides Ophelia, denounces Claudius, sneers at Laertes' pain, and deals Horatio the cruelest blow of all by denying him the right to follow his friend in death.

I wear this crown of thorns

Does Hamlet have a savior complex?  He's pretty doggone convinced he's the only one who can fix this mess he's stuck in.  He never calls in outside help, never tells anyone but Horatio his suspicions.  And then he dies to free his people from the evils of his uncle's poisonous ways.

Upon my liar's chair,

Hamlet also lies throughout the play.  He tells Ophelia that he loved her once, and that he loved her never.  He tells her she should not believe what he says.  He pretends to be mad, he sends Rosencrantz and Guildenstern to their deaths with a lie.  He's so convinced of his own rightness, his own cleverness, that he's very careless with the truth.

"These are but wild and whirling words."  Hamlet's very thoughts are sometimes broken, disarranged, almost impossible to follow.  His head is so full of broken thoughts he can't repair that it takes very little effort for him to appear mad.

Beneath the stains of time,
The feelings disappear.

Hamlet is very fixated on how Gertrude's love for her first husband seemed to die with him, to be forgotten within "a little month."  Her feelings disappeared, stained and painted over by time until they seemed to be erased.

You are someone else;
I am still right here.

Hamlet sees the world around him change almost overnight.  His mother becomes someone else by marrying his uncle.  The woman he loves suddenly repels his affection.  Guys he was friends with turn into spies.  It often seems like he's standing still and the whole of Denmark is caught in a whirlwind of change around him.

What have I become,
My sweetest friend?

These are the words he could very well address to Horatio.  Horatio knew him at the university in Wittenberg, and he would be able to see the changes in Hamlet.  Also, he's basically the sweestest friend anyone could ever have.

Everyone I know
Goes away in the end.

By the end of the play, every single person Hamlet was close to when he was growing up is dead.  His father, his mother, his uncle, his girlfriend, her father, her brother, and two of his friends, all gone.  Only his college buddy remains, and even he wanted to die too.

And you could have it all:
My empire of dirt.

Hamlet leaves everything to Fortinbras, who gets to swoop in and take over Denmark at the end.

I will let you down.
I will make you hurt.

There are times in this play where Hamlet lets me down, where he makes me hurt.  He gets very bratty at times, and he behaves very badly toward Ophelia.  I have diffuculty liking him in certain scenes, even though I love him so dearly.

If I could start again
A million miles away,

If only he hadn't been born in Denmark, hadn't been born to set right this disjointed time -- or if he could have stayed on that pirate ship and sailed far away to begin life anew -- what would he have been able to accomplish, that sharp-witted, fascinating man?

I would keep myself.
I would find a way.

At the very least, he might have been able to keep himself alive, to find a way out of the nutshell-prison of his own mind. 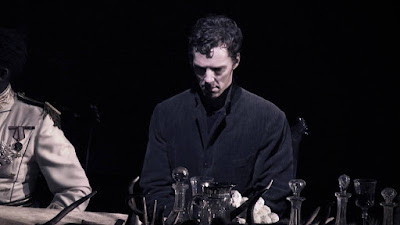 Okay, it's 11:56, and I think I've exhausted my ideas here.  I hope somebody found it interesting -- probably about two people will actually read this all the way to the end.  If you're one of them, I hope you don't now think I'm an utter loony.  Really not, just obsessed with Hamlet, you know :-)