I have decided that I don't like writing reviews of movies I have only seen once, because generally my first viewing of a movie involves me trying to wrap my head around the who and what it's about and how it's getting handled, and I can't generally "get" the movie until the second viewing.  If I liked it enough to watch it again, that is.  Some movies just don't merit a second viewing.

So if I want to review a movie while it's still in theaters, but can't/don't want to see it twice in the theater... I have to review them after one viewing.  Which is what I'm doing here. 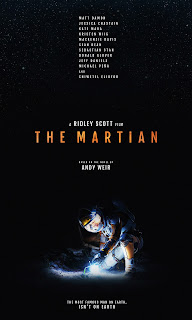 Because I thought The Martian was excellent.  Intelligent writing, superb acting, spectacular effects.  But I know I won't have time to see it in the theater again, though I want to see it on DVD.  So I'm just going to give it a cursory review now, and when I see it on DVD, I may review it more thoroughly.

Let's start with the acting.  This is Matt Damon's show, and he unabashedly owns it.  He gets to run an emotional gamut here, from stressed to angry to fearful to sad to determined to hopeless to joyful to annoyed.  He nails them all.

Everyone else ranged from fine to great, with Chiwetel Ejiofer and Jeff Daniels and Sean Bean on the great end, Jessica Chastain and Sebastian Stan and Kate Mara in the middle, and everyone else doing fine, but nothing hugely special.  I was really excited to see Aksel Hennie (and hear his voice) because I liked him a lot in Hercules (2014).

I have read a lot of reviews of the book by Andy Weir, and many of them mentioned its wry humor, so I was looking forward to seeing how a story about a guy stranded on Mars could be funny.  It did not disappoint.  Though this had its scary and tense and sad parts, much of this movie actually had kind of a feel-good vibe, and it definitely had a lot of funny lines and moments.

One part that I found absolutely hilarious, that made me laugh aloud, involved a reference to the Council of Elrond from The Fellowship of the Ring, and what made me laugh was that Sean Bean was sitting right there, and of course as Boromir, he was at the Council of Elrond, and so I absolutely busted up over that moment.  And no one else in the theater laughed there, though they all laughed a couple beats later over a related joke.  Hmm. 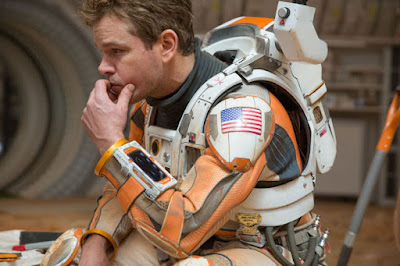 Anyway, I totally dug this movie and I really want to read the book now.  Is it family-friendly?  Not perzackly.  There's a fair bit of bad language, including taking God's name in vain and the F-word.  There's also a rear-naked shot that establishes just how much of a physical toll the food privations are taking on the main character.  And like I said, there are scary and intense moments.  This will clean up really easily with a program like ClearPlay, I think, so if you're in doubt, wait for the DVD, I guess.  But if you're willing to deal with those things, this is breathtaking on the big screen.  I had to see it in 3D because that was the only showtime that worked, and the 3D was really well-done -- it made you feel like you were actually there on Mars, not just seeing pictures of it.
Posted by Hamlette (Rachel) at 5:46 PM