Remember the Five Female Characters Tag I did earlier this month?  Olivia of Meanwhile, in Rivendell has tagged me with its counterpart :-)  So here goes! 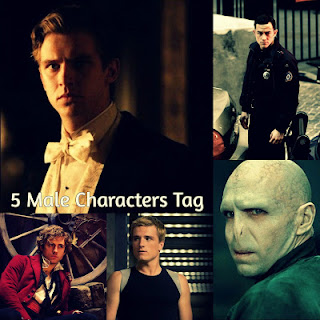 Rules:
1.) List 5 of your favorite male characters (book or screen)
2.) Tagging other people is optional
3.) If you are tagged link back to the person that tagged you
4.) Link back to Revealed In Time

Choose one from each category:

Right, so here goes.  Once again, I'm very happy that this tag specifies these can be "five OF your favorite male characters" because I could choose five or ten for each of these categories. So here are the ones I feel like talking about today:

The Man from Snowy River (1982) has been my favorite movie since I was 2 years old.  I've blogged about it before here and here.  The man himself, Jim Craig, has been object of my aspirations for more than 30 years.  When I watched this the last time, about a year and a half ago, I realized that I have spent my life trying to be like Jim Craig.  Honest, innocent-yet-not-naive, forthright, stubborn, determined, kind, helpful -- that's Jim Craig, and that's what I try to be. 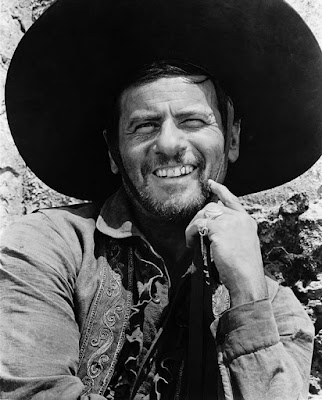 Yeah, I have trouble with villains.  I tend to adamantly dislike them, and the idea of "favorite villain" is a hard one for me.  But I am genuinely fond of Calverra.  I wrote a whole post about him here, but to recap, I like him because he treats the business of being a bandit chieftain as just another day job. He isn't out to be Mean and Nasty and Evul. Robbing just happens to be how he makes his living and provides for the men who depend on him. 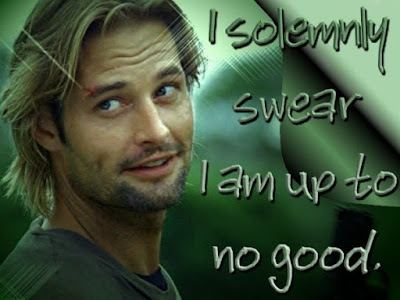 Um, yeah.  Sawyer.  ::Sigh::  How can I explain Sawyer?  He's a con artist who grew up hating con artists.  He works hard to make people dislike him because he dislikes himself.  He tries time and again not to do the right thing because he doesn't believe he's the right kind of guy... but despite himself, over the course of six seasons, he becomes a genuinely Good Guy.  Because I tend to blog about characters I dearly love, I've got a whole post about him too, here.


4.) Best book-to-screen adaption:  Jack Aubrey (Russell Crowe) and Stephen Maturin (Paul Bettany) from Master and Commander:  The Far Side of the World (2003) 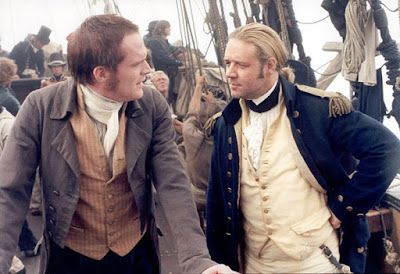 When I blogged about the soundtrack here on James the Movie Reviewer's blog, someone commented that my calling M&C "one of the finest book-to-film adaptations ever" made it seem like I hadn't read the book, because the plot of the movie has very little to do with the plot of Patrick O'Brian's book Master and Commander.  And that's true.  Because the movie pulls from several of the 20 books in the series, all of which I have read.  And when it comes to capturing the essence of characters, and also their mannerisms, foibles, habits, and even physicality, I have yet to see the match of these two.  And yes, I'm talking about both of them because you can't talk about Aubrey without Maturin, and vice versa.  It doesn't work. 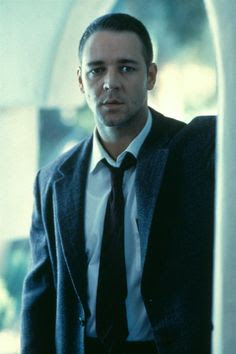 I need to put a big disclaimer here before I talk about Bud.  I would not recommend LA Confidential to most of my blogging friends.  It's not a nice movie.  There's a lot of bad stuff in it:  prostitution, murder, drug use, corruption, violence, greed, lust, anger, woman-hitting, homosexuality, and rotting corpses.  It fully earns its R rating.  I don't ordinarily watch movies like it.  I don't recommend that you do, either.

However.  Bud White.  Just look at him in that picture, and maybe you can understand why the phrase "in his eyes, all the sadness of the world" comes to my mind when I think of Bud.  (Yeah, that's from Phantom of the Opera.  Everything gets mashed together in my head.  It's a fun place.)

When we first meet Bud White, we see him as a thuggish police officer, valuable only for his fists and willingness to use them on command.  He's just a big slab of unemotional muscle.  But as the story unfolds, we get to see the mind behind those muscles, the emotions he fears and tries to control.  When he unleashes his anger and pain, it is fearsome, much more so than the sight of him punching someone when his boss tells him to.  And when we get to see the clever mind behind both the muscles and the emotions, we finally see him for what he is:  an intelligent, damaged, but redeemable man.


Once again, I'm not tagging anyone because I'm supposed to be getting ready for my Hamlet read-along, which starts tomorrow.  However, if you want to do either this tag or the Five Female Characters version, have at it!
Posted by Hamlette (Rachel) at 7:36 PM