I've now seen The Man from U.N.C.L.E. four times, and I'm hoping to go for a fifth viewing this weekend.  (Cowboy is the coolest husband ever, by the way -- he does not bat an eye at me going to the same movie over and over anymore.  I guess he's grown accustomed to my weirdness.)  This movie is just plain fun, folks.  It's like going on a vacation.  Pretty views, attractive people, cheerful music -- it's a playful, play-filled movie, and I love it.  I do. 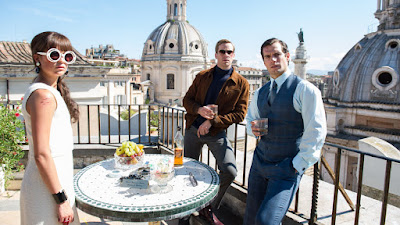 The first two viewings, I mostly loved Illya Kuryakin (Armie Hammer) and focused on him.  But by the third, I had gotten used to Napoleon Solo (Henry Cavill) and decided I could trust him.  Um, yes, this was an issue for me.  Sometimes I don't trust fictional characters, especially if they don't always treat other fictional characters I love the way I think they should.  I loved Illya from the get-go -- yes, yes, I was predisposed toward him because he's played by Armie Hammer, but by the time they finished filling in his back story in a few deft sentences, I was a goner.  So I got really upset with Solo the first time I watched it, especially when he took a long time to rescue Illya at one point, and i was getting desperate.  The second time, I was more okay with him, but it took until that third viewing for me to truly like him.  But now I do, so it's all good. 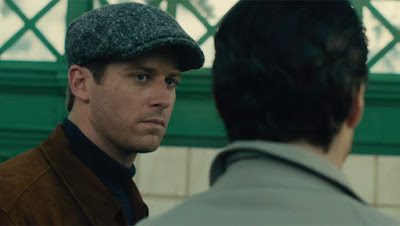 And then there's Gaby Teller (Alicia Vikander).  She's like a sparkler -- spitting and fizzing and lighting up everything around her.  She's just as smart and intrepid as the boys, and has no problem taking them to task if she thinks they're going off track.  She's also beautiful, and her hair is about the same color as mine, which makes me ridiculously happy.  She's not afraid to get dirty, she's willing to admit it when she's scared, and she's not afraid to be feminine.  I want her hats.  And Illya's. 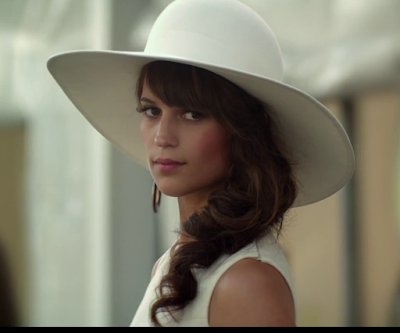 I've read a criticism or two of the fact that Gaby needs to be rescued in the final act being a damsel-in-distress cliche, but I find this completely fatuous.  Solo had to rescue Illya, and Illya had to rescue Solo, so why shouldn't Gaby get her turn being rescued?  Silly people. 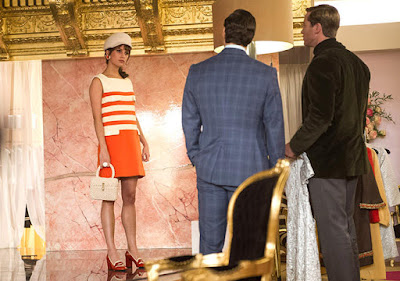 I wish soooo much that this movie had done better at the box office, because I crave a sequel.  But I fear it is not to be.  Which is a crying shame, because this movie works so well on so many levels and truly deserves a sequel.  It's smart, playful, funny, stylish... the leads are genuinely likable (yes, Solo too -- it's only my protectiveness of Illya that made me not like him at first), the sets and costumes are delicious, and overall... I love it.  Did I say that already? 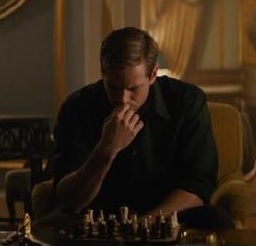 Time to talk about the soundtrack.  I've reviewed it for James the Movie Reviewer's blog, and you can read my thoughts about it here.  While I don't love every track on the album, I do enjoy it as a whole, and there's only one track that I generally skip ("Compared to What" by Roberta Flack has a bad word in it I don't want my kids hearing).  Sam likes one song ("Circular Story") so much he asked if I could put it on his laptop so he can listen to it while he writes.  (When my first laptop got old and crotchety and wasn't supported by Microsoft anymore, we took all the internet capabilities and most of the programs off it and gave it to Sam.  He loves to write stories on it while listening to music "just like Mommy.") 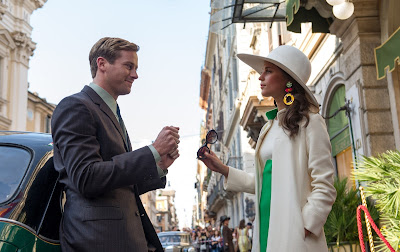 I have a million other things I could say about this movie -- favorite lines, favorite moments, things that make me laugh (Solo's apron!  Illya changing his tie because Solo says it doesn't match his suit!  Gaby dancing!), plot points I find so smart and sensible... but I'm tired, and I need to post this so you know where to find my soundtrack review.
Posted by Hamlette (Rachel) at 8:43 PM