This month, the Heidi's topic for Inkling Explorations is gypsies.  Go here to read her post and other people's entries.

I am going to focus on my favorite film adaptation of my favorite novel:  Jane Eyre by Charlotte Bronte.  I love the 1983 BBC version starring Zelah Clarke and Timothy Dalton, and the "gypsy scene" in it never fails to delight me -- it's got just the right mix of mystery and humor.

This post is going to be spoilage-laden, for anyone who doesn't know the story of Jane Eyre.  Not just know the basics, but have actually read or seen it.  Just so you know! 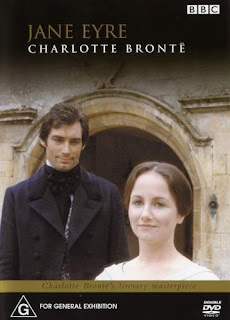 So Mr. Rochester is having a big house party, and by "house party" I mean he has like a dozen people staying with him, neighbors and acquaintances and so on.  Including the beautiful Miss Blanche Ingram, whom he is rumored to be courting.  One day, while Mr. Rochester is out on business and his guests are all terribly bored, a gypsy woman comes to call.  She insists on seeing all the ladies in the house to tell them their fortunes.  They're bored, so off they go, though many of the ladies don't seem very pleased with her uncannily accurate predictions.  Miss Ingram in particular is quite annoyed when she returns to the group.

The gypsy insists on seeing all the ladies, including the young governess, Jane Eyre.  Jane agrees to go because she thinks it could be interesting.  Into the library she goes to confront the old woman.

Now, the book says the gypsy "had on a red cloak and a black bonnet: or rather, a broad-brimmed gipsy hat, tied down with a striped handkerchief under her chin."  They kept to the color scheme in this version at least, showing a red kerchief under a black hood of some sort. 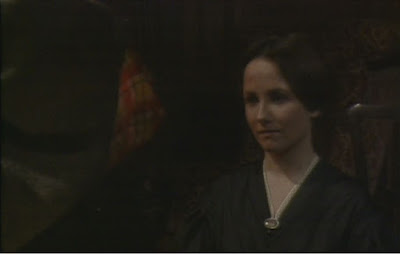 The book also says the gypsy "drew out a short black pipe, and lighting it began to smoke," which they adhere to in this version as well. 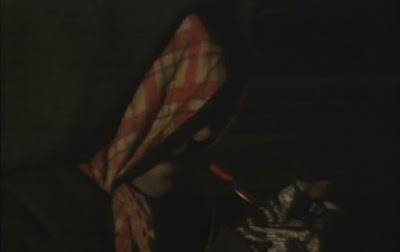 The gypsy starts to tell Jane Eyre things about herself and her habits that make Jane suspect she's been speaking with the servants to learn things about the household.  The gypsy avers it's not so, then tries to draw out Jane's thoughts and feelings about her employer, Mr. Rochester. 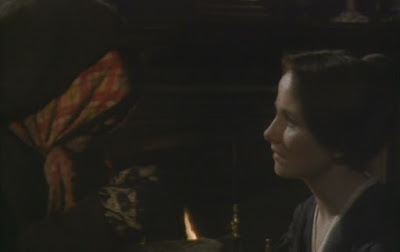 Jane doesn't like this at all.  She's growing pretty attached to Mr. Rochester, but she doesn't really want to admit it to herself, much less a weird old gypsy. 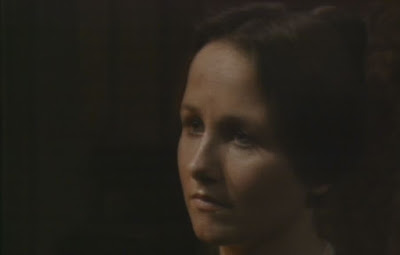 But hey, guess what?  It's not actually an old gypsy lady at all!  It's actually Rochester in disguise!  Hahahaha!  What a good joke! 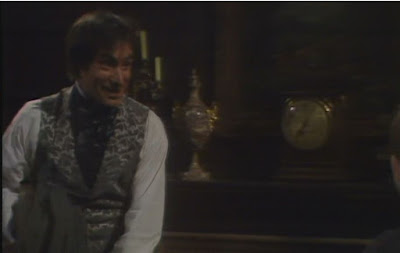 Well, he thinks it's a good joke, anyway.  Jane is not at all amused because he was trying to draw her out and get her to admit she likes him.  But I love how gleeful Rochester is here -- Timothy Dalton exudes boyish delight in this scene, which is what makes me love it.  He doesn't expect Jane to be so awfully angry with him, as you can see. 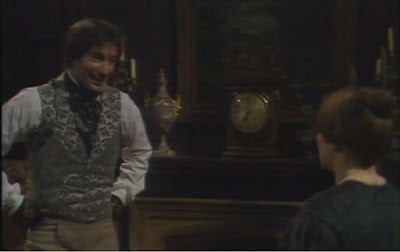 Then, of course, she tells him a certain Mr. Mason is waiting, and all the fun is over.  And this is what makes this scene so pivotal.  Having learned Jane does care for him at least a bit, a deeply distressed Rochester asks if she would stand by him if all the world were against him.  She says she would do so for any friend, and here I think she begins to suspect that he might return her regard, for why else would he ask her such a thing?  And why else was he trying to find out how she felt about him in the first place? 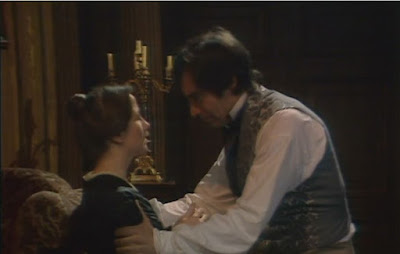 If you haven't seen this version, but like the story or just like BBC period dramas in general, do yourself a favor and find it!  The characterizations are first-rate, and while the filming has that '80s BBC we're-using-videotape-because-it's-cheaper thing going on, it's still very enjoyable.
Posted by Hamlette (Rachel) at 7:10 PM