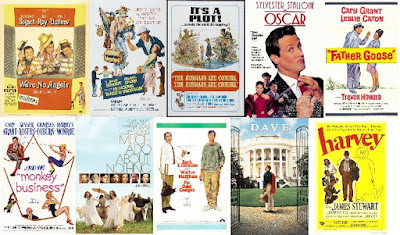 Three escaped convicts (Humphrey Bogart, Peter Ustinov, and Aldo Ray) try to rescue a bumbling businessman (Leo G. Carroll) from his unscrupulous cousin (Basil Rathbone). One of the two funniest movies I have ever seen, and also one of the most heart-warming.  DO NOT get the 1989 remake by mistake.

Roger Hobbs (James Stewart) and his wife Peggy (Maureen O'Hara) vacation with their family in a decidedly eccentric house, encountering many gently comic adventures.  This is one of those movies I quote all the time in my head.

A Russian submarine gets stuck on a sandbar outside a tiny New England village, and Lt. Rosanov (Alan Arkin) goes ashore to find a way to free it without starting World War Three.  This is the other funniest movie I have ever seen, and I'm way overdue for a rewatch.

A wealthy mobster (Sylvester Stallone) tries to go straight and become a banker, but is constantly hindered by everyone from his daughter and wife to the chauffeur, an elocutionist, and some supposedly vicious tailors.  I am not a big fan of screwball comedies, which this resembles, but oh, this movie makes me laugh.

A misanthropic drunk (Cary Grant) reluctantly becomes an island spotter during WWII and winds up on a deserted island caring for a group of young girls and their oh-so-proper chaperon (Leslie Caron).  This is both sweet and salty, and I love it dearly.

A scientist (Cary Grant) tests an anti-aging formula on himself and his wife (Ginger Rogers), with unexpected results.  Marilyn Monroe has a small role too.  This is one of the few movies that Cowboy will willingly watch over and over.

Two soldiers (Kenneth Branagh and Robert Sean Leonard) woo cousins (Emma Thompson and Kate Beckinsale) in Shakespeare's classic dramedy about how what we believe about someone might be more important to us than the truth.

Fussbudget Felix (Jack Lemmon) and slob Oscar (Walter Matthau), try to share an apartment while Felix tries to come to terms with his recent divorce.  It's delicious.

A lowly temp agent (Kevin Kline) who impersonates the President for fun gets called on to impersonate him for real when the actual President has a stroke.  It's kind of like The Prince and the Pauper, only happier.

A gentle tippler (James Stewart) has a giant, invisible rabbit named Harvey for a best friend.  His sister takes him to a psychiatric hospital to get rid of the rabbit, with surprising results.  Oh, this movie warms my heart.  It's less laugh-out-loud funny than the other titles here, but I do get some chuckles from it too.
Posted by Hamlette (Rachel) at 10:21 AM