"Would You Rather" Tag for Epic Story Month!

I am participating in the Epic Story Month event hosted by Heidi at Along the Brandywine, and I have finally had a few minutes to devote to answering the official tag!

I rather think I'd pick the giant because giants can't fly and don't breathe fire.  I think my chances of survival go way up because of those two factors.  Besides, the odds of me being accompanied by Ewan McGregor in weird armor and funny hair go WAY up if I'm fighting giants. 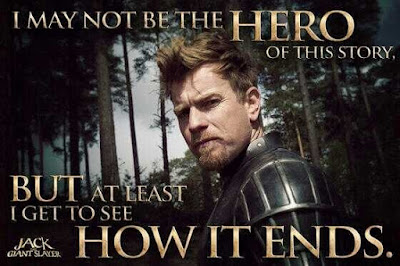 2) …time travel back to ancient Egypt or go to Mars?

Ancient Egypt!  Oh my goodness, I was so obsessed with Eyptology when I was in my tweens.  I had half a semester in college on the history of ancient Egypt too, and it was so fascinating.

Another easy one for me to answer.  I have always longed to go SCUBA diving and explore underwater shipwrecks and so on.  An underwater city would be just as exciting, I think!  This is another long-time obsession -- when I was seven, we went to Disneyland, and I only remember two rides we went on.  One was It's a Small World, which was much more geared toward my little brother, and one was their Submarine Voyage, which I guess no longer exists.  I loved it, and have been really fascinated by SCUBA diving and submarines ever since.

And, yes, 20,000 Leagues Under the Sea (1954) is one of my favorite classic Disney movies :-)  I just showed it to my kids for the first time a couple weeks ago, and they thought it was lots of fun.  They also pointed out that the Nautilus appears to have a smiley face on one side, as shown above!

4) …be a court jester or lead a wagon train?

Oh, a wagon train!  A wagon train!  I am no good at making funny jokes or doing tricks, and I hate being the center of attention, but I am capable of being bossy and making decisions, no problem.  Plus, having written a whole book that takes place on a wagon train, I feel like I'd at least have some chance of leading one well.

5) …eat a meal with hobbits or Master Tumnus?

The hobbits.  Any hobbits.  Well, maybe not Ted Sandyman.  But any other hobbits, absolutely.  Hobbits know how to eat well! 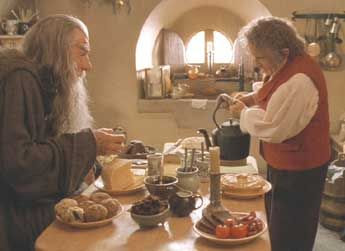 6) …walk through an enchanted mirror or jump into a pool leading into another world?

Um, do I know where either of those lead?  It doesn't make much difference either way if they're both going somewhere unknown.  I suppose the pool holds slightly more appeal, just because I like to swim.

7) …live in a castle or a house in the treetops?

Well, when I was a young teen, I used to daydream that *I* got to marry Fritz (James MacArthur) from The Swiss Family Robinson (1960) and live happily ever after with him in our own tree house on the family's island, so I'm definitely going with the house in the treetops. 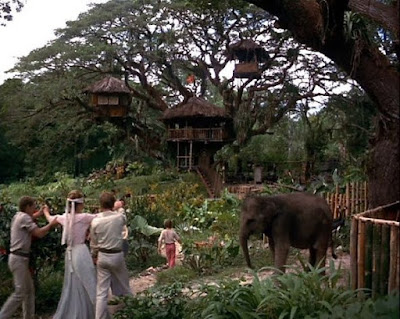 8) …go over a waterfall in a barrel or climb Mt. Everest?

9) …ride a buffalo or be a cannoneer in a sea battle?

Are we talking an American Bison or a Cape Buffalo?  Because I hear that cape buffalo are the most dangerous animals on earth, so I'm not going near them, thanks.  And all in all, I think I'd take the sea battle because I do like naval warfare stories.

10) Bonus question: you’re caught by the Bad Guys and tied up to a chair when a fire erupts at your feet (long story ;)). Do you break the ropes and tumble out the window, yell for help, or hop your chair across the room to take refuge in the cold fireplace/chimney corner?

It all depends on if I'm tied back-to-back with Henry Jones Jr. or Henry Jones Sr.  I think I'd have more luck with the chair-hopping or the rope-breaking if I had Jr.  If it's Sr., I'll yell for help and hope for the best, I guess.