Although Saigon (1947) generally gets classified as film noir, I'm really not sure why.  It isn't very dark, although it does involve crime and death.  I think it gets called noir because it pairs Alan Ladd with Veronica Lake, and the other three films they star opposite each other in (This Gun for Hire [1942], The Glass Key [1942], and The Blue Dahlia [1946]) ARE definitely noir indeed.  So I think people just assume this is too, since it was made in the '40s, stars Ladd and Lake, and has some really snarky dialog.

I don't know... it just doesn't feel noir to me.  A little dark and cynical here and there, but whatever.  Maybe it's because this has never been released to VHS or DVD, so not enough people have seen it to know whether it is or isn't noir?  Which is a shame, because basically the only way you can see it is on TV, or via a grey-market copy.  Man, how I wish Universal would release it to DVD like they have so many of Ladd's other pictures!  Or maybe that nice company (I think the same Canadian company that put out his The Great Gatsby [1949]?) who's released a couple of collections of Alan's movies the last year or two could do another set and include this?

Well anyway, now you know why this review is peppered with stills and promo pictures instead of my usual screencaps.  If it ever comes out on DVD, I will get all the screencaps my little heart could desire and either do a new post or just replace what I've got here, most of which I found on Pinterest. 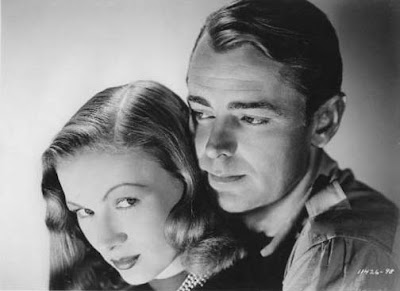 (This is going to be full of spoilage, but I figure since you can't buy a copy to watch, you aren't going to care.)

Saigon opens in a doctor's office, with Major Larry Briggs (Alan Ladd) waiting for the doctor's report on a guy in his Air Force crew.  The doctor says he's terribly sorry, but Briggs's buddy, Captain Mike Perry (Douglas Dick), has a fatal (unspecified and vague) brain condition and only a couple of months to live.  Which IS a pretty dark way to open a film, I will admit.  Briggs begs the doctor not to tell Perry the diagnosis, saying he'd rather tell Perry in is own way.

Briggs then hustles off to meet up with another Air Force pal, Sgt. Pete Rocco (Wally Cassell).  He tells Rocco the truth, and insists that they're just not going to tell Perry he's going to die.  Perry has no family back home in the US.  (Oh, yes, we're all in... China?  Vietnam?  Japan?  Somewhere vaguely Southeast Asia.)  There's no reason to hurry him back to the states -- they'll just give him the best couple of months of his life and let him live in happy ignorance until one day, he's gone.

Rocco says Perry has the right to be told, but he's very used to obeying Briggs's orders, so he goes along with it.  They welcome Perry to the bar and set out to have a very good time indeed.

It seems they've all been mustered out of the Army Air Force now that the war is over,  (or the Navy?  This movie is VERY VAGUE on details -- but maybe that's because the year this was released is the year the Air Force became its own branch of the Armed Forces, and so they just left it vague because that wasn't quite done yet?).  But they've just been kind of hanging out over in Southeast Asia?  Or maybe they've been waiting for Perry to get a medical discharge?  I've watched this multiple times now and still haven't figured out all those pesky little details, so I think the movie just shrugs them off.  It has more important business to accomplish, like getting Veronica Lake's character on the scene so she and Alan Ladd can get those sparks flying.

So, anyway, Briggs and Rocco and Perry take on a job flying a Rich Guy (Morris Carnovsky) to Saigon from whatever indeterminate Southeast Asia place they're all in.  (I mean, it probably mentions it during the film and I just didn't catch it?  Maybe?)  They're going to get ten thousand dollars for this job, and that's not peanuts -- and the Rich Guy will even supply the plane!  Which, it turns out, is ancient and probably stolen and may or may not fly, but hey, for ten grand, they'll give it a whirl.  Especially since Briggs and Rocco plan to spend their share on giving Perry a last couple months of extreme happiness and fun.

They get the plane running and figure they can make it fly after all, but the Rich Guy hasn't shown up yet, just his "secretary" Susan (Veronica Lake), who has a bunch of luggage and a suitcase she insists on holding herself.  Everyone's ready for takeoff... but no Rich Guy. 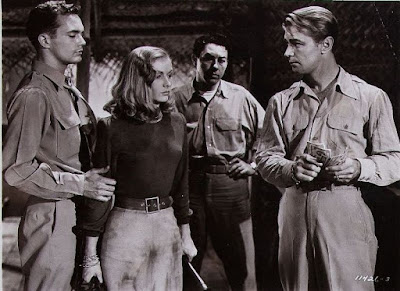 And then, from not far away, there comes the sound of gunfire.  Lots of gunfire.  Many shots being exchanged from many firearms, some of which Briggs identifies from the sound as police guns.  Because he's cool like that.  He decides that they were paid to leave at a certain time, so up they will go whether the Rich Guy has arrived yet or not.  And takes off.  Much to the extreme consternation of Susan, who tries to grab the controls, jump out of the plane, or do anything else she can think of to get them to wait for her boss.  Nothing doing, though, and eventually, Rocco knocks her cold to stop her from crashing the plane.

Interesting aside: Veronica Lake actually knew how to fly a plane.  She got her pilot's license, and even flew her own plane across the country in 1948.  So if they'd let her grab the controls, she probably could've handled it.

Well, when Susan comes to, she's staring right into the eyes of the unknowingly doomed Perry, who turns out to be basically the American Good Guy personified, all friendly and cheerful and down-to-earth and NICE.  He's extremely gentlemanly toward Susan, and it's clear he's got a big crush on her.  As opposed to Briggs, who snarls at her and makes snide remarks and is as antagonistic as possible because The Powers That Be obviously had caught on to the fact that Ladd is never more swoon-worthy than when he's pushing away the woman he's secretly getting more and more interested in.  Works every time for him, that no one can deny.  So he keeps on riling her up whenever possible because... it works.  Whereas Rocco mostly makes wisecracks for her because he's just the sidekick and knows he'll never get anywhere with the female lead anyway. 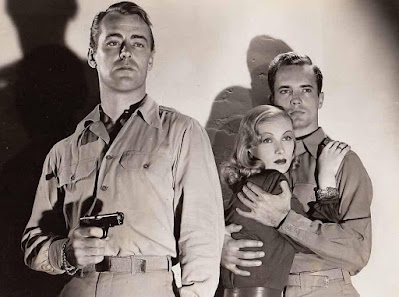 And then the plane runs out of fuel and they have to crash-land in a rice paddy, because that's the only place you can ever crash a plane if you're in Southeast Asia.  They make such nice, exciting splashes, you know.  This leads to Briggs picking Susan up and carrying her through the water, grimacing in annoyance all the way because being nice to her just makes him crabby.  She fusses and fusses, and finally insists he put her down, so he does, about fifty feet from the end of the field.  That means she gets and wet and muddy after all, but hey, a girl has to have her pride!  You can't let crabby pilots carry you around everywhere! 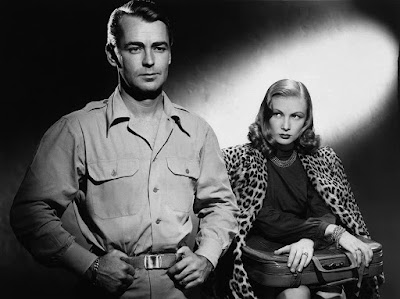 Susan spends the next several scenes insisting she needs dry clothes.  This is her own darn fault and I feel no sympathy for her.  She could've waited to fuss at Briggs until he'd finished carrying her through the water.  Silly woman. 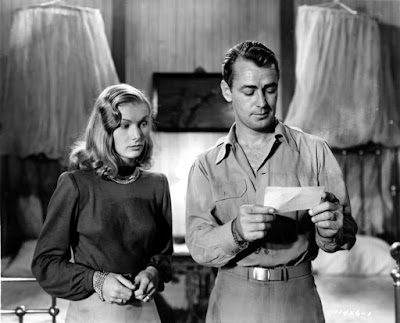 We all end up at this hotel, where the plot thickens, especially regarding how sappy Perry is getting about Susan.  Starry-eyed, love-struck, the works.  Susan just wants to get to Saigon with her briefcase, though, and merely tolerates his chivalry.  They all take a boat to Saigon, whereupon Briggs sneaks into Susan's cabin, finds her briefcase, opens it, discovers it's full of cash, steals the cash, mails the cash to Saigon, and then, when Susan discovers him sneaking around her room, tells Susan that Perry is dying of a brain cloud or whatever, so couldn't she please be nice to him?  To Perry, I mean, not to Briggs.  Briggs doesn't want Susan to be nice to him because then he might have to be nice to her, and that would Never Do because he's much too dedicated to flinging snide remarks at her.  Obviously. 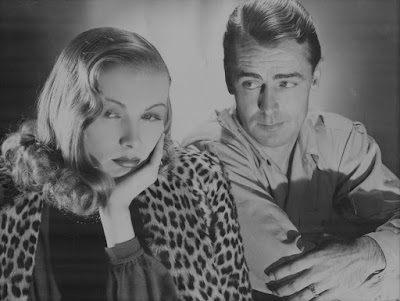 Are you still following me?  Probably, because it's really not a very complicated movie.  Everyone gets to Saigon, and SURPRISE!!!  The Rich Guy didn't die in that shoot-out they heard before they left on the plane!  And now he's here in Saigon!  And he wants his money that Susan was carrying around in that briefcase!  But now the briefcase is empty!  And he thinks Susan took it!  And he thinks Susan is working with Briggs!  And then we all end up at this really fancy hotel, where Perry proposes to Susan, Briggs yells at Susan, the Rich Guy and his Henchmen shoot at people, Briggs kisses Susan, and Many Other Surprises Occur. 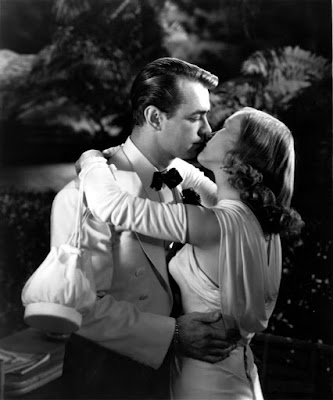 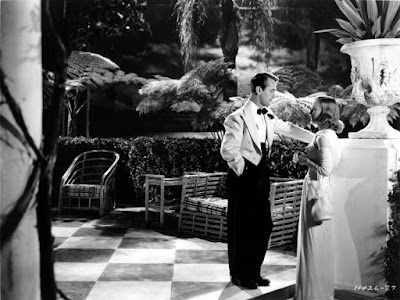 Perry succumbs to his brain disease right on cue, leaving Susan and Briggs free to end the film walking away together into their unspecified future.  And leaving Rocco to continue making wisecracks because he's so good at it.  Also, the bad guys get stopped, and it turns out Susan really WAS just a secretary and is now reformed of her money-toting henchwoman ways.  But she and Briggs are still going to make snide remarks to each other because my goodness, why stop that fun just because they're in love now? 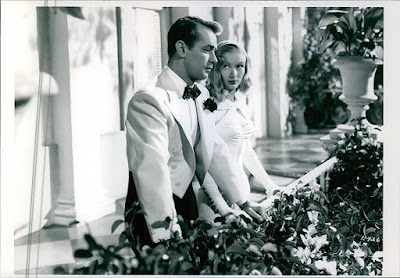 Is this movie family friendly?  Yeah, pretty much.  There's some shooting and some moments of people in danger, and Perry does die, and there's a very nice kiss.  No cussing or spicy bits, just some mild, flirty innuendo here and there, of the 1940s variety.  I'd let my kids watch it.