Jane Eyre by Charlotte Bronte is my favorite novel.  I've read it at least a dozen times, most recently this past summer, when I inhaled it in three days.  So you'd better believe I am picky when it comes to adaptations of this particular story.  Just as picky as I am about Hamlet productions, in fact.
So the fact that a DVD copy of the 1943 film Jane Eyre starring Joan Fontaine (as Jane Eyre) and Orson Welles (as Mr. Rochester) has a place on my movie shelves says a lot about this version, I think. 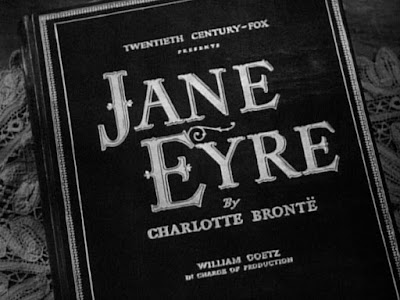 In order for me to really like a film adaptation of Jane Eyre, I have to like BOTH the Jane and the Rochester.  If I only like one or the other, I'm just not going to like the film as a whole.  And because I love those two characters dearly, I'm fairly picky about how they get portrayed.  This is as much about how they are written for the screen as about the actors, to be honest.
I insist that Jane have an unwavering moral strength, but also an innate yearning for kindness and friendship.  In the book, she spends her whole life insisting on obeying God (and the conscience he gave her) rather than men.  Quite a few men try to break her to their own will -- John Reid, Mr. Brocklehurst, Mr. Rochester, and St. John Rivers -- but they all fail because she is calmly assured of her own worth in God's eyes.  She doesn't need their approbation, even though she "would always rather be happy than dignified" and aloof.  She wants friends, but she is perfectly capable of being alone if the would-be friends would draw her away from rightness. 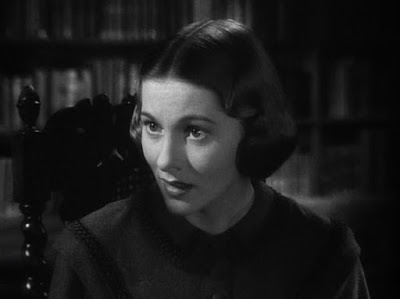 As for Mr. Rochester, in order to satisfy me, he must be unruly and irascible, but not cruel.  Selfish and defiant of convention, with a tendency toward loose morals, but still with a firm desire for doing the right thing by those who are in lower station than he is.  And he must gradually see the errors in his ways and repent of them.  Movie versions tend to leave out the scenes toward the end where he repents and asks God to forgive him for his behavior toward Bertha and Jane in particular, but I need to have the sense that that's happened off-stage. 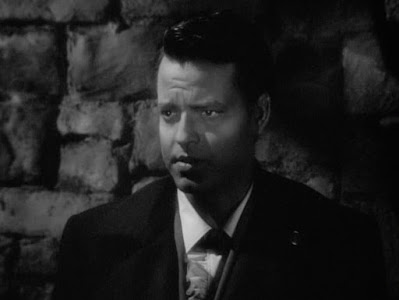 In the 1943 version, I am quite satisfied with both the Jane (Joan Fontaine) and the Rochester (Orson Welles).  And I didn't expect to be, actually.  I love Welles's radio show The Campbell Playhouse because he had such a rich, vibrant voice, but I didn't care for his movie Citizen Kane (1941) (but I'd like to watch it again to see if my opinion changes), and I'm not a big fan of The Third Man (1949) either. Those were the only things I'd seen him in when he was young, and I just couldn't imagine him as Rochester.  It was easier to imagine Fontaine as Jane because I like her a lot in Rebecca (1940), which is practically a retelling of Jane Eyre in a lot of ways. 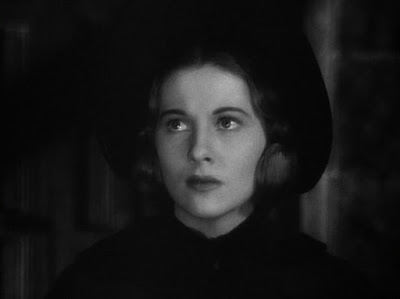 So the first time I watched this, I was actually more interested in the child actresses than anyone else.  I love Margaret O'Brien, especially in Meet Me in St. Louis (1944), and I suspected she would be a cute and sweet Adele in this. 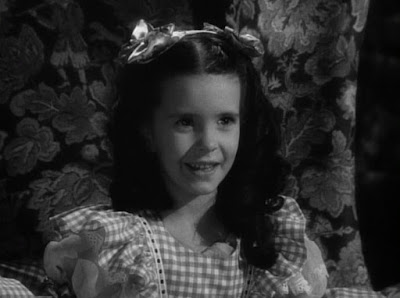 I've only seen Elizabeth Taylor as a child actress a couple times, so I was eager to see how she would play Helen Burns. 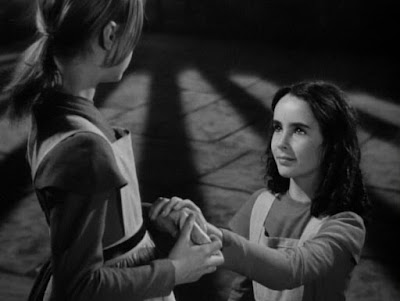 And I knew Peggy Ann Garner from one of my favorite episodes of Combat! (1962-27), "Off Limits," where she was an adult, so I thought it would be neat to see her as a child playing the young Jane Eyre. 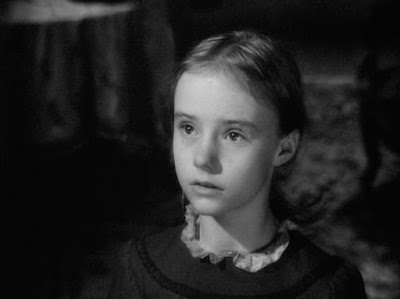 Happily, none of the child actresses disappointed me either!  In fact, O'Brien is by far my favorite Adele in any of the six Jane Eyre films I've seen.  O'Brien and Fontaine have especially good chemistry. 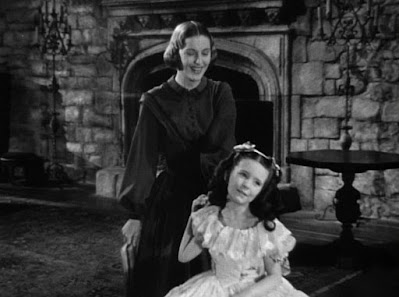 This is the first film Welles made in which he was not the director.  I wonder if that's why I like him better here?  Maybe he was able to be a little looser or more at ease than in Citizen Kane.  Or maybe he'd just gotten more used to the filming process.  Or maybe he's just admirably suited to this role.  He surprised me by how likable and charming he is in this role, even a little mischievous at times.  He has this little puckish twinkle in his eye when he teases Jane that I just loved.  It kept him from seeming too petulant or dictatorial.  In fact, I found him to be very sweet most of the time. 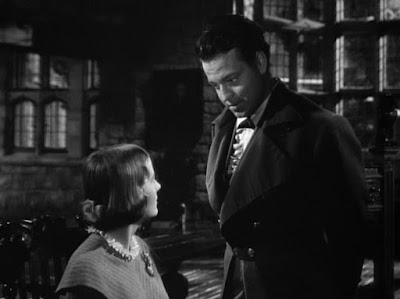 And there's one scene that absolutely endeared this Rochester to me.  It's not in the book, but I loved it.  When he's nearly been burnt alive in his bed, after he's made sure everything is secure (trying not to spoil too much here), he suddenly realizes Adele may be in danger too, and rushes off with Jane to check on her.  And when he sees she's safe and asleep, he is filled with pity for her and regrets having spoken to her harshly earlier.  That was the moment, the first time I watched this version, that I knew I could approve of this Rochester. 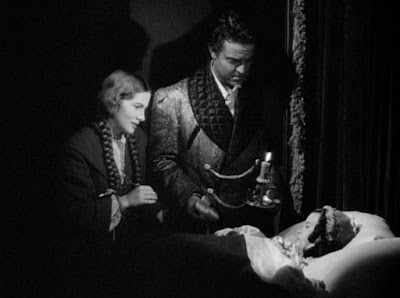 Joan Fontaine is not one of my favorite Janes, but I do like her.  She lacks a little of Jane's inner fire most of the time.  She kind of passively gets pushed from place to place like a pawn on a chessboard... until she realizes she must leave Thornfield.  Then we finally see that inner steel, and by the end, I quite like her.  Still not a favorite, but that's okay. 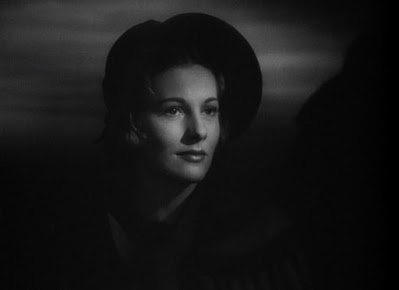 (This paragraph and the next have some SPOILERS.)  They change up the story a bit, to make it fit into a brisk 97 minutes.  St. John Rivers (John Sutton) is now a doctor who attends patients at Lowood!  He's a kind friend to Jane at the beginning of the film, and appears a bit at the end too. 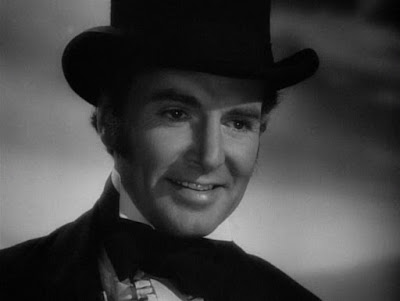 So instead of Jane ending up with the Rivers family for the last third of the story, she goes back to her aunt's house when she leaves Thornfield.  That actually works very nicely, I think.  If you're going to cut out any big section of this book, the time with the Rivers is the bit to cut.  Jane does grow and mature when she's with them, but I feel like they don't need that as much in this version because she's already quite self-possessed and adult when she arrives at Thornfield, instead of being more hesitant and girlish yet.  (End SPOILERS.) 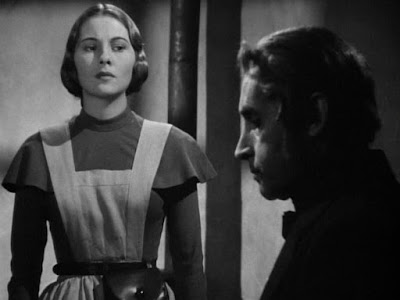 I really liked the staging of this version.  There are a lot of high shots looking down at Jane as a child, as you can see above, and lots of low shots that make adults feel menacing in the beginning.  Both help you get the sense that Jane is being pushed around and bullied. 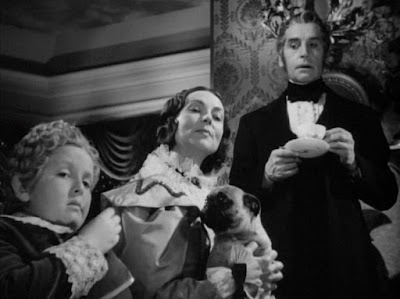 Rochester also gets shot from a low angle at first, or with most of his face in shadow, making him appear dangerous. 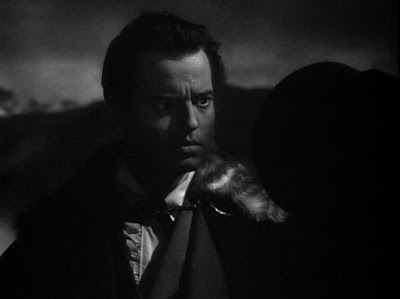 And there are some amazingly atmospheric shots, almost noir-esque in their use of shadows. 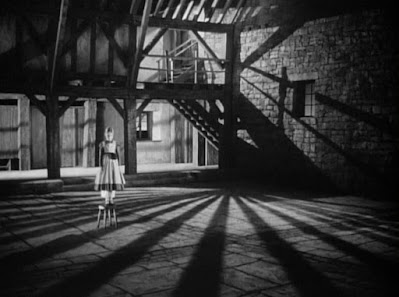 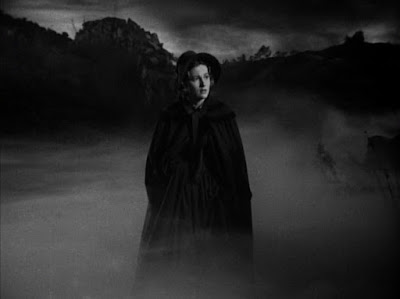 I noticed when I rewatched it this week that there are a lot of ceilings in it, which made me laugh, since Welles's Citizen Kane is so famous for all its low shots that show ceilings.  I wonder if director Robert Stevenson or director of photography George Barnes did that on purpose, since Welles was the star?  Probably. 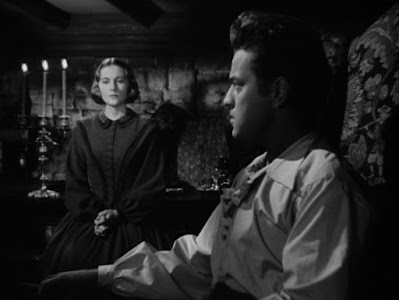 Anyway, I mostly know Stevenson for his many Disney movies, like Kidnapped (1959) and Mary Poppins (1964).  He also worked on the screenplay for this, though Aldous Huxley gets the onscreen credit.
Oh, if you don't know what this story is about, it's about a young woman named Jane Eyre who takes a job as governess for a little girl named Adele who lives in a gloomy old mansion called Thornfield Hall.  Adele is the ward of the mercurial Mr. Rochester, and Jane and Rochester fall in love.  But then obstacles appear, and lots of drama happens, but it all turns out well in the end.
Overall, I really like this version of my favorite book, and if you'd like a good introduction to the characters without investing hours and hours of time, it's a good choice.  You can rent it on Amazon Prime and YouTube right now.  If you already know the story and would like a little taste of it, you can watch the proposal scene on YouTube:
Is this movie family friendly?  Absolutely!  No cussing, no racy bits added to spice up the story for no reason whatsoever (glaring at you, 2006 version), and there's only one part where Rochester mentions the fact that Adele is probably his illigetimate daughter, which is very quick and tasteful.
This has been my contribution to the 2021 Classic Literature on Film Blogathon hosted by Silver Screen Classics.  Click here to visit the official blogathon post, where you can find links to all the cool reviews people are contributing. 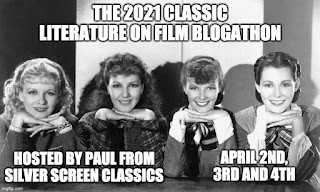