When I was growing up, back in the dark ages when DVDs hadn't been invented yet, my brother and I called these sorts of movies "two-tapers" because they were so long, they required two VHS tapes to hold them.  You knew just from looking at their double-thick cases that they were going to contain astonishing scenery, sweeping character arcs, and possibly some major historical events.  We loved to pull those off our family's shelves when we were laid up with a bad cold, knowing that for three or four hours, we'd be completely absorbed in someone else's troubles and struggles and triumphs and able to forget our own headaches and sore throats.

Well, here are my ten favorite epics.  Note:  Both Shakespeare and Tolkien have been purposely excluded from this list because otherwise it would just be all them. 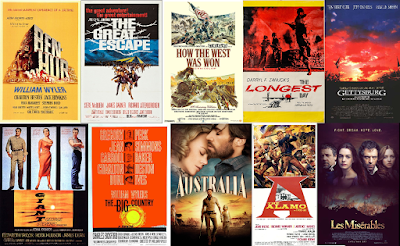 The Nazis brilliantly put all their worst Allied eggs (Steve McQueen, James Coburn, Charles Bronson, James Garner...) in one prison camp, and naturally all those escape artists work together to escape. I love this on so many levels, from the whole band-of-misfits-working-together angle to the clever planning to the actual escape itself. And it's based on a true story!

One family heads west, and various members of it get caught up in various aspects of settling the Old West, from frontier life to the Civil War to building the railroad to fighting outlaws.  Boasts a truly impressive cast, including James Stewart, John Wayne, Debbie Reynolds, Gregory Peck, Carroll Baker, Robert Preston, Lee J. Cobb, Eli Wallach, and soooo many more.

The story of the D-Day invasion during WWII, told from many viewpoints, with one of the most impressive casts ever assembled: John Wayne, Richard Burton, Robert Mitchum, Henry Fonda, Sal Mineo, Richard Todd, and a very young Sean Connery, to name a very few. Until we had kids and lost our big chunks of movie-watching time, Cowboy and I used to watch this together every D-Day.

Another talented ensemble cast shows many of the events leading up to and during the turning point of the American Civil War. Jeff Daniels turns in a wonderful performance as Col. Joshua Lawrence Chamberalain, one of my personal heroes.

A spoiled East Coast beauty (Elizabeth Taylor) marries a stubborn Texas rancher (Rock Hudson), and they spend twenty-five years trying to figure each other out. One of the first movies I can remember seeing, and my favorite James Dean movie.

A ship captain (Gregory Peck) retires from the sea and moves to Texas to be near his fiancee (Carroll Baker), makes friends with her best friend (Jean Simmons), has a deliriously long fistfight with her father's foreman (Charlton Heston), and tries to diffuse a feud.

A newly arrived Englishwoman (Nicole Kidman) and a drifting Drover (Hugh Jackman) struggle with thieves, a war, and Australia itself to find a way to be together.  The only movie where I get cowboys AND WWII soldiers :-)

Davy Crockett (John Wayne) leads a bunch of freedom-loving Americans to Texas to help the freedom-loving Texans fight for independence.  They hole up in the Alamo mission with Col. Travis (Laurence Harvey) and Jim Bowie (Richard Widmark) and a hundred other men and fight off overwhelming enemy forces for days and days and days.

Jean Valjean (Hugh Jackman) evades a dogged policeman (Russell Crowe) for decades, adopts a young girl (Amanda Seyfried), saves the boy the girl loves (Eddie Redmayne), and finally dies in peace.  Oh, and everyone sings about everything, all the time.  Also, there's a small revolution.

This has been my first contribution to the Of High Stakes and Daring Deeds event hosted by Heidi for six weeks at Along the Brandywine.  Stay tuned for more epic story posts!