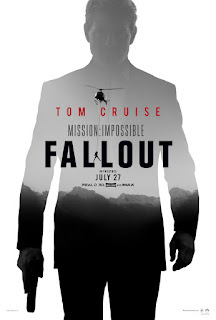 Okay, so that was an incredibly stressful movie.  Eventually.  Not at first!  At first, it was quite fun.  Fun and bouncy and lots of little "haha, got you!" moments where they trick people with their masks and their tech and so on.

(SPOILER) All the scenes in the trailer, where it looks like Henry Cavill's throwing Tom Cruise thru walls and stuff?  Totally not.  Henry and Tom are working together to fight other people.  But then it all twists, and Henry's actually the bad guy, but he's convinced the CIA that Tom's the bad guy, and everybody's after him except Simon Pegg and Ving Rhames (END SPOILER), and it's all kinds of cat-and-mouse chases, which were fun, except there were a LOT of chase scenes.

Oh, but there was one chase scene that busted me up because it HAS to be a nod to The Man from UNCLE (2015) -- Tom Cruise and Henry Cavill in a truck that they drive full-speed through an increasingly narrow alley until it gets stuck.  And since Tom was originally cast to play Napoleon Solo, but then Henry ended up stepping into the role because of M:I Rogue Nation going over its shooting schedule or whatever, and so it was really fun while Henry and Tom were working together (but never getting along) because of UNCLE thoughts.

Anyway, the ending was horribly tense, with him hanging off this helicopter and I have nightmares like that where I'm hanging off something and I lose my grip, and that's what happens to him, so I had to remind myself it was just a movie, he was going to be fine.  And if I have to do that, then it's too tense, because I have to purposely remove myself from the movie, and that's just annoying.  Then he and Henry were fighting at the edge of this cliff, and you know they're going to go over the cliff, and I was like, "JUST FALL ALREADY AND GET IT OVER WITH!" and then they did, and I was like, "It's just a movie, it's just a movie, nobody actually fell over that cliff," because that's my real-life fear, watching people fall off cliffs.

And so yeah, it was really tense and maybe I'll watch it again on DVD, but maybe not because I think that jumping jacks and bike rides are safer ways to get in my cardio workout than jacking up on that much adrenaline and terror.

But Rebecca Ferguson was gorgeous and tough and I loved her.

And Simon Pegg was funny, and Ving Rhames was loveable, and so that made me happy.

And I sat next to this lovely lady who was probably in her 70s, and she just got the biggest kick out of this movie.  It was like sitting next to my dad -- she totally reacted to stuff the way he does.  She was having the time of her life, and I should've like asked her to be my friend or something because she must be a barrel of fun to hang out with.  When it was done, she was all, "Whoooeee, that was a wild ride!" and I wanted to hug her, hee.

So, those are my initial thoughts.  Which were originally my email to DKoren when I got home from the movie, and I said all I had to say about the movie in that email, so I figured, why write it up twice?  And just shared it with you, with spoilaged marked :-)

Is this movie family friendly?  Contains the F-word and some other bad language.  LOTS of non-gory violence of the punching and stabbing and shooting sort.  One scene that involves strangulation and is hard to watch.  No innuendo or smutty scenes.
Posted by Hamlette (Rachel) at 2:38 PM