Well... it's Thursday, and I'm finally getting a chance to post the WIPjoy pics from last week, so that tells you how this week has gone!  Our church's VBS (that I talked about in my last post) has been going fantastically well, but I'm reeeeeally tired when I get home.  Today, I'm managing to do some laundry and blogging, though, so yay!

Anyway, last week was "Character Takeover Week" and I let my characters answer the questions ;-)

Day 16: Your main character talks about their childhood summers

My MC, Jedediah Jones, grew up on a farm in Minnesota with three older brothers.  His summers were busy and hot :-) 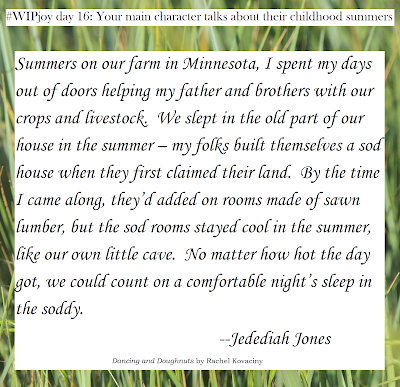 So... Dancing and Doughnuts actually has multiple antagonists.  But for this prompt, I chose Mayor Gatz to answer the question because he really does have a bedtime routine/ritual. 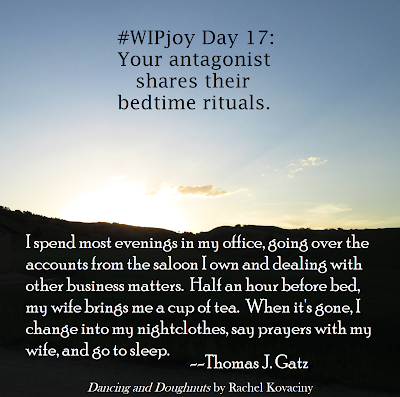 Day 18: A line from a minor character

John Kittredge is a local rancher who I did not originally have in the story.  He swaggered into my brain one day, worked himself into a scene, and wound up being fairly important to the whole plot.  Plus, he's really handsome.  And has a good sense of humor.  Can you tell I love him? 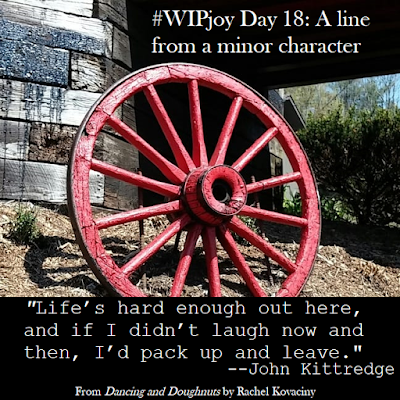 Day 19: Your main character shares something they're ashamed of

Jedediah Jones probably has a lot of dark stuff in his past, thanks to being in the Union Cavalry during the American Civil War.  But he doesn't like to dwell on the past, so his confession here stays on the lighter side. 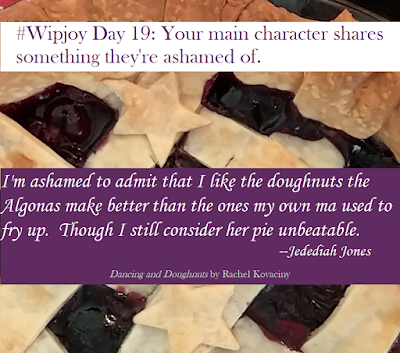 This week... I've dropped out of the challenge because of the aforementioned tiredness and busyness.  But I'll try to do a few more posts over the weekend and into next week!
Posted by Hamlette (Rachel) at 3:53 PM

Email ThisBlogThis!Share to TwitterShare to FacebookShare to Pinterest
Labels: "Dancing and Doughnuts", Once Upon a Western, writing