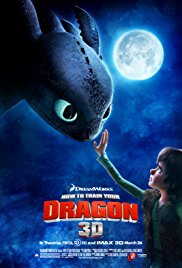 It took me eight years to finally see this, but now I've seen it three times in a little over a week.  Because I LOVE IT!!!  Everyone has been telling me to that I would, and so I finally borrowed it from a friend and watched it.  And then watched it again with my kids.  And then took my kids to see it on the big screen today because it was playing as part of a local theater's summer kids movie series thing.  And then bought our own copy on DVD.  Because yeah, my kids love it too.

They think it's weird, though, that I cry during it.  And I cry quite a bit, in four main spots.  Like, have-to-blow-my-nose kind of crying, not just tearing up a little.  Because wow, parents and kids not understanding each other, and then learning to understand each other?  That always hits me.  And people proving themselves when everyone has told them they're useless or bad at something or whatever?  HUGE sweet spot for me.  And people befriending beasts?  Love that.  And someone sacrificing themselves to save others?  Can never get enough of that.  And happy endings?  Always my favorite.  So yeah... I cry a lot during this movie.

But I also laugh a lot too, cuz the Vikings are all pretty hilarious, and Hiccup's a great wry narrator.  Also, Hiccup?  Is basically my son, only a teenager instead of a ten-year-old.  Brainy, weedy, a little awkward, but so brave and loveable and kind.

This isn't really a review, just me gushing about how awesome this movie is.  This is totally going to end up on my "favorite new-to-me movies of 2018" list.  I can't wait to see the sequel.  And I saw the trailer for #3 in the theater last weekend and I cried over it too because... feels!  All the feels!
Posted by Hamlette (Rachel) at 4:53 PM