This paragraph is only here so that, if you haven't seen the movie yet, and this pops up in your GFC feed, it doesn't give away lots of spoilers.  I promised DKoren I would not say any words she could see or hear about this movie until she's had a chance to see it, so this is just a paragraph of filler that's keeping all spoilers out of her sight AND YOURS... just in case.  I think this paragraph is long enough now, so I'll stop. 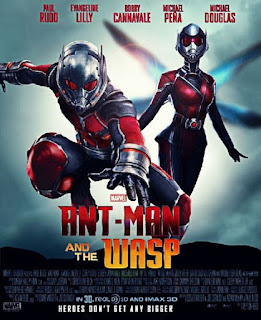 I totally dug Ant-Man and the Wasp.  It was extreme amounts of fun!  The first Ant-Man (2015) is just a jolly heist adventure, and this one one hundred percent kept up that vibe of "Normal People Can Be Heroes Too, Even If They're Not Very Good At It."  That's one of the things I love most about Ant-Man -- he's a normal dude.  He's not a god, he's not a genius-billionaire-playboy-philanthropist, he's not a brilliant scientist, he never got bitten by anything radioactive, he's not a king, nobody did science experiments on him -- he's like Falcon, you know?  I LOVE Falcon too because he's just a normal guy doing the right thing any way he can.  Including wearing a super-powered suit designed by someone else.  (I should love War Machine too, by the same logic, but I liked Terence Howard in the role better than Don Cheadle and I just... haven't gravitated toward him.)

ANYWAY!  The movie was awesome!  And by the end of it, I was like, "Yes!  I forgive Marvel!  I am a full-fledged MCU fan again, there is hope for the future, everything will be okay.  My summer is all bright and happy again, and I'm going to go have a really great day cleaning up my house and busting out a bunch of chores."

This is the spot where you stop reading if you haven't watched the movie.  Okay?  For reals.  After this picture, there are possible SPOILERS. 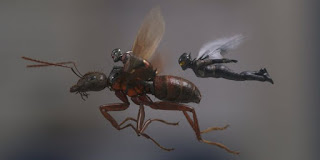 Because then I watched the stinger.  And now I have gone from being angry and frustrated with the MCU, thanks to Avengers: Infinity War: Part One (2018) to being disgusted with the MCU filmmakers.  Again with the emotional manipulation!  I was happy, I was cheerful, and then you just killed all the joy I'd filled up on, and now... I'm bitter and annoyed.

I talked in my post on IW about how I need a solid dose of happiness in my superhero movies.  It's why I shy away from the DC movies -- they're dark and morose and have a very pessimistic vibe to them.  In fact, I haven't seen The Dark Knight Rises yet because The Dark Knight was too disturbing.  It's just a thing with me, I guess -- if I want to be sad, I'll watch a tragedy like Hamlet.  I don't watch superhero movies when I want to be sad.  I watch them for a jolt of actiony happiness.  I'll try explaining this more fully sometime, but I think it ties in to how I don't like dark and broody Robin Hoods either.  I need cheerful Robin Hoods.  I need superheroes where the world gets better by the end of the film, not worse.

So yeah, this is kind of a rant.  Because I was ready to leave the theater pumped up and ready to go fix our broken bathroom faucet and do all kinds of great stuff, and now I'm feeling bitter and depressed, and you know what?  I JUST GOT OVER THE FUNK THAT INFINITY WAR PUT ME INTO!  I'M SICK OF THE FUNK.
Posted by Hamlette (Rachel) at 1:04 PM